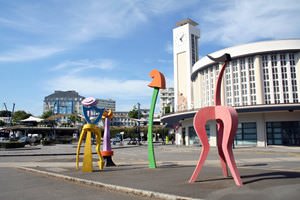 Brest is a beautiful city with rich history. It was damaged severely during the Second World War, so today tourists can see only a fraction of historic sites and place of interest that have managed to survive. The ancient castle of Brest and Tour Tanguy Tower located not far away from it are known as the most famous attractions of the city. The castle was built in the 14th century. This is a powerful fortification, which may seem a little severe and grim at a glance. The old tower has become the location of a museum, the exhibition of which is devoted to pre-war history of the city. Among the priceless exhibits of the museum you will surely find old photographs and documents, as well as a large collection of paintings and historical artifacts.
Extraordinary weekend in Brest - unusual places, services and attractions for travel gourmet
…

Open
The eastern part of Brest is the location of another important excursion destination - Okeanapolis. The large-scale center is divided into several themed zones, each of which is devoted to the peculiarities of a particular climate zone. The center is home to 40 huge aquariums in total. Here guests of the center will see a rich collection of inhabitants of the oceans and other marine creatures. Visitors are free to make an excursion around the center and listen to interesting lectures. A photo with seals and penguins that live in the Polar pavilion will become a wonderful memorable item.
Fans of photography should definitely visit Centre Atlantique de la Photographie Gallery, which was opened in 1996. Each year the gallery hosts more than a dozen of various exhibitions that feature works of most famous photographers of the country. Returning to the subject of architectural monuments of Brest, we should definitely not forget to mention Recouvrance Bridge, which is widely known as the largest drawbridge in Europe. The length of the bridge is 87 meters; this is one of the most prominent architectural sites of Brest. Copyright www.orangesmile.com
Brest design-hotels for stylish travellers
Appart City Brest Place de Strasbourg stands out among the most stylish and elegant hotels in Brest. All of its strictly-colored apartments and spacious studios are decorated with luxurious …

Open
Without a doubt, Promenade Cours Dajot is the best place for walking. The promenade offers dramatic views of the city’s port district and Brest canal. Quite a notable fact – the promenade is paved on the ancient castle walls that once have surrounded the city. Maritime Museum occupies one of the most beautiful historic buildings of Brest. This is the place where you can see an interesting collection of exhibits, which are connected with the sea. Here are exhibited interesting tools used by sailors, old maps and historical documents. Connoisseurs of art will be interested in visiting Museum of Fine Arts, which exhibits works by Lacombe, Monet and other famous followers of Pont-Aven school. 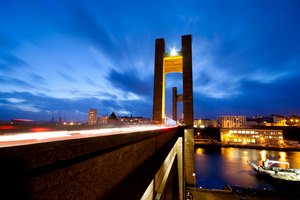 Phare du Petit Minou is a must-visit destination. It is here that you can behold the most amazing sunsets in the city. The views here amaze even the most avid tourist, who does not seem to be surprised by anything. This lighthouse was built in 1848 There is a beautiful bridge that leads to it, walking along which you can feel the spirit of the time hovering in the air. You should definitely take a walk along Pont de Recouvrance, which was once the largest bridge in all of Europe. Many people consider the place to be the most picturesque in the entire region. The peculiarity of the place is that beautiful views of the naval port can be beheld from here, and, obviously, there is the possibility of observing the arrival and departure of ships.
Top places to stay in Brest - most luxurious hotels
Lovers of luxury comfort will not be disappointed in Brest, as many elite world-brand hotels offer their services here. They include first-class Hôtel Le Continental occupying a chic …

Open
Base Navale de Brest, which was built in 1631 by order of Cardinal Richelieu, is today one of the most visited attractions. This is for a definite reason – the place is really fascinating, especially with the fact that it has a high historical value. Going a little further, you can come across Base Sous-Marine Brest, the construction of which began in 1941, marking the era of submarines. The bases played an important role during World War II. Lovers of marine subjects will definitely appreciate the Musée National de la Marine, where exhibits showing that the capital of Brittany is a major seaport are collected. You will find here things like models of ships, equipment, as well as sculptures and paintings related to the maritime theme. 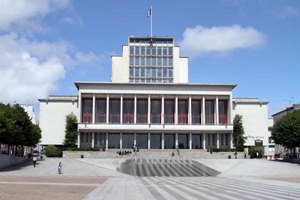 It is worth taking a walk along Rue Saint-Malo; a place where antiquity and modernity meet. It is amazingly beautiful here, and it is worth mentioning that this is one of the few streets that miraculously escaped being bombed during the Second World War. Square Mathon is another fascinating place to take a walk. The street lined with greenery, flowering plants, and astonishing scents – all this awaits those who decide to take a stroll here. The main shopping street, Rue de Siam, is likewise worth a walk. This street has its own unique environment. It bears such a name because, in the year 1686, three ambassadors from Siam arrived here to meet with Louis XIV.
Best hotel choice for romantic escape, wedding or honeymoon in Brest
Near the center of Brest is one of the most romantic hotels visited by hundreds of couples every year - Logis Hotel Center. They are attracted by its exquisitely decorated rooms featuring …

Open
There are a lot of interesting sculptures in Brest which are definitely worth seeing while in the city. These are monuments such as the Fanny de Laninon et Jean Quéméneur (located on Place Henri Ansquer), L'Arbre Empathique (can be found at Boulevard des Francais Libres). Among other attractions that travelers will love, it is worth noting Brest Arena. The stadium is impressive in its size. In addition, interesting games are often held here. It is therefore worthwhile to follow the announcement of upcoming events, so as not to miss them. You should also note that there two churches here worthy of attendance – Église Saint-Louis de Brest and Eglise Saint Martin.

This guide to cultural sights Brest is protected by the copyright law. You can re-publish this content with mandatory attribution: direct and active hyperlink to www.orangesmile.com.
Brest - guide chapters 1 2 3 4 5 6 7 8 9 10 11

What to visit during two-day excursion in Brest

Cathedrals and basilicas near Brest
♥   Basilique-Cathédrale Saint-Corentin, Quimper, 53.1 km from the center. On the map 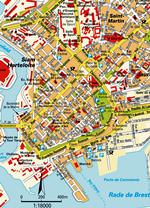 Photogallery of cultural heritage of Brest

Excursions over cultural sights of neighbours of Brest

Brittany
Historic monuments of Bretagne are as interesting and diverse as cultural traditions of the region are. One of the most popular places is the ancient port town of Saint-Malo; it was named in honor of a Christian monk. For many years the picturesque coastal town remained the center of the slave trade and corsairs’ haven; the Old Town district reminds about those old days. It ... Open »
Rennes
Age-old fresco paintings, high columns made of rare red marble, elegant gold plated elements – tourist spend hours contemplating the glory and majesty of the cathedral. Travelers wishing to get a deeper insight into the history of the city and of its suburbs should pay a visit to the Bretagne Museum. The museum offers three permanent exhibitions encompassing interesting ... Open »
Nantes
A significant landmark of the destination which will be of great interest for all tourists is the Castle of the dukes of Brittany. It was the main residence of dukes of Brittany since its establishment (the 13th century) till the 16th century. Then the castle stood abandoned for a certain period of time and at present this massive fortifying building is a place of the Nantes ... Open »
Laval
The old Eglise des Cordeliers draws the attention of all connoisseurs of ancient architecture. It looks quite modest outwardly, while a chic decoration in the style of past years is hidden inside. It was possible to preserve its artistically decorated vaulted ceiling and iconostasis, which was set up here immediately after the completion of construction. The church is quite ... Open »
Normandy
Calvados, Manche and Orne departments have a huge number of fascinating attractions that can hardly be visited all in one visit to Normandy. Perhaps the most impressive historical monuments can be found in Calvados. The famous allied landing in Normandy was on its territory. Caen Memorial Museum is dedicated to this event. Moreover, the museum has one of the biggest ... Open »
Angers
Today, the building has elements made from limestone, tufa, and schist. Palais du Tau became a state-owned property in 1907. After reconstruction, a museum of religious art was opened in the palace in 1910. This museum has been open for more than a century. It exhibits collections of old icons and religious artifacts. A collection of old tapestries with religious scenes is a ... Open »

Culture guide to Brest. Which fascinating sights to visit once you are in Brest: temples, churches, museums, theaters and castles. Recommendations (with addresses, phone numbers and links) on the places 'must visit' in Brest. Plan your own city excursion by using this page info!