Video of flights over top monuments of Barcelona in HD format.
Use 'Full Screen' mode.
What are the most important landmarks to see first and foremost in Barcelona? Without a doubt, the original architecture of the city deserves the highest attention. Barcelona Cathedral, Sagrada Familia, Columbus Monument, Camp Nou, Magic Fountain of Montjuic and many others – are the architectural landmarks that attract millions of tourists every year. Let’s visit Barcelona right now by making a virtual tour using our fantastic 3D flight simulator! Just start the video on this page and make a flight over the main sites of Barcelona, which are presented in a three-dimensional format. Besides that, our review includes interesting facts and colorful photos of every monument. 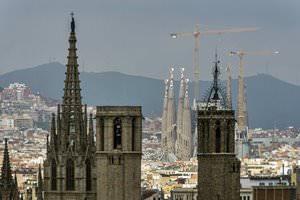 Facts:
» The Barcelona Cathedral is dedicated to St. Eulalia, a young girl who was tortured and martyred for Christian faith.
» That’s the main religious building in Barcelona.
» The most valuable relic of the Barcelona Cathedral are relics of Saint Eulalia buried under the main altar; if you push the 50-cent coin in the slot, the sarcophagus will light with fires.
» The painted wooden sarcophagus is set on the stand at the south wall. According to the legend, it belongs to Ramon Berenguer I, Count of Barcelona, and his wife.
» The chapel stores the most revered image of Christ, Holy Christ of Lepanto, that was on the ship of Juan of Austria at the battle of Lepanto. 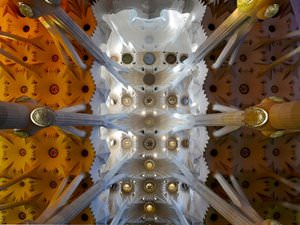 Facts:
» Sagrada Familia is one of the most famous delayed constructions in the world.
» Walls of Sagrada Familia are decorated with biblical scenes.
» The temple relies on the same columns and arches, on which houses do. The system is ingenious with lots of light, air and space. That’s the huge building, but it looks like a cloud castle.
» The calvary over the entrance to the Sagrada Familia portrays Christ in a very unusual and avant-garde way.
»  “Whether a person is playing God, creating such masterpieces, or God plays a man with such plans born in his mind,” said one of the researchers of Antonio Gaudi, stunned in amazement near Sagrada Familia.
» Barcelona Bishop in holiday garb uttered the phrase, “May the sleeping hearts wake up, may the faith be exalted, may the mercy triumph, may the God have mercy on this country ...”; with that he laid the first stone of the future temple dedicated to the worship and glorification of the Holy Family. 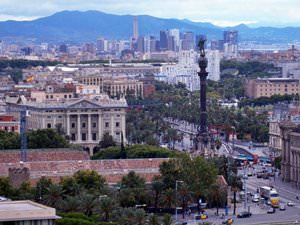 Facts:
» Columbus Monument is the grandiose monument established in honor of the discoverer of the Americas, Christopher Columbus.
» The monument is situated at the site where Columbus returned from his first voyage to America. The monument is a reminder of Columbus visit to Queen Isabella I and King Ferdinand II in Barcelona.
» The word ‘Tierra’ is engraved on the pedestal; it’s translated from Spanish as ‘land’.
» There is an elevator inside the main column of the monument. You can climb to the statue itself, where a site next to Columbus provides a wonderful opportunity to enjoy the panoramic view of Barcelona from a height of over 40 meters.
» Like all art, a monument to Columbus generates a lot of controversy and legends. The main question that plagues all the tourists and residents of Barcelona is a place, where Columbus points the finger of his right hand. Many believe that Columbus shows at New World, which he was able to open. Some claim that Columbus is pointing with his finger towards the East, to his homeland, the city of Genoa.
» The monument is set on an octagonal pedestal, the corners of which are decorated with bronze figures of the goddess of victory. Portraits of people who have played an important mission in the life of Christopher Columbus and his travels are seen at the rear of the pedestal. 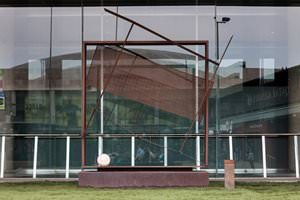 Facts:
» Legendary Camp Nou is the largest stadium in Europe and one of the most famous stadiums in the world.
» Great matches of Barcelona FC with its worst enemy, Real Madrid, were held there; this confrontation has deep roots in the past.
» The arena is called the Nou Camp or New Field. The stadium is one of the ten most capacious stadiums in the world, and has UEFA five-star mark.
» The first stone was laid in March 1953, and the initial budget was 67 million pesetas.
» The museum of Barcelona is in the premises of the stadium. The museum was opened in 1984, and that’s the most visited museum in the whole of Catalonia. The rich exposition illustrates the rich history of Barcelona. It’s considered the best football museum in the world. 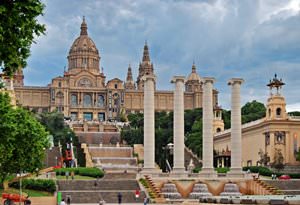 Facts:
» The Magic Fountain of Montjuic is an amazing sight. Here light, music, movement and flow of the water are combined in sequence, creating a sense of magic.
» This magnificent fountain is located in the eponymous Montjuic hill; that’s one of the most famous sights of Barcelona.
» Magic Fountain is visited by 2.5 million visitors a year.
» The Fountain of Montjuic was built in 1929 and became the chief ornament of the International Fair and Universal Exhibition held in Barcelona in the same year.
» The fountain uses recycled water, so it’s safe to drink directly from the pool.
» That was the world's first fountain where water, light and music were synchronized in a single show.
» In normal mode, fountain of Montjuic comes to life every 30 minutes. The start of the performance depends on the time of year.

Church of the Sacred Heart, Barcelona

Facts: » The Church of the Sacred Heart is located at the top of Tibidabo and is visible from any point of Barcelona. Above the temple stands the statue of Christ embracing the whole world.
» The Church of the Sacred Heart at the moment is the building consisting of at least two parts. The lower part looks like a fortress wall (it’s built of Montjuic stone), and the upper is a church in the Gothic Revival style.
» Due to the fact that the facade of the temple is constructed in a special way, it seems that the building tends directly to heaven. The building of the church is decorated with magnificent statues of the Apostles, the Virgin Mary and patron saints of Catalonia.
» The place for the erection wasn’t chosen occasionally, as the name of the mountain Tibidabo comes from the Latin phrase ‘give you’ and is a string of the Gospel. It means all earthly pleasures and wealth offered when Satan tempted Christ.

CONTINUE - PART II »»
This guide to architectural sightseeing in Barcelona is protected by the copyright law. You can re-publish this content with mandatory attribution: direct and active hyperlink to www.orangesmile.com.
Barcelona - guide chapters 1 2 3 4 5 6 7 8 9 10 11 12 13 14 15 16 17

Build your walking routes in Barcelona on the landmark map

Architectural landmarks in the regions around Barcelona

Marseille
Cathédrale Sainte-Marie-Majeure is located at the site of the wooden church built in the 5th century, which is proved by excavations. In the late 19th century, it was decided to demolish the old building upon the order of Napoleon III. The citizens were not satisfied with this decision and held a protest demonstration. The old building was not dismantled completely. The new cathedral was built near it. The locals call it “strips on the ... Open »
San Sebastian
To build a summer cottage, the members of the Spanish royal family purchased the land at the coast of the bay. The residence was finished in 1893. The three-storey palace is located in the upper city. Servants lived on the upper floors. The basement was used for household needs. It is just a few meters from the beach. To link Antiguo with the other district of the city, the tunnel for vehicles was specifically built. The tunnel is dug ... Open »
Bordeaux
Cathedrale Saint-Andre was reconstructed many times. According to the chronicles, there had been buildings built in the 3rd century at the site. This construction was first mentioned in chronicles in 814. The Normans destroyed it. At the beginning of the 11th century, the first stone was laid in the cathedral's foundation in commemoration of the marriage of Louis VII and Eleanor of Aquitaine. In 1130, the northern Porte Royale ... Open »
Bilbao
Believers came to the Basilica de Begona to worship the patroness of sailors, the Virgin Mary. Services are daily held in the religious institution. Grand festivals dedicated to the Virgin are held here twice a year. The church for her glory started to be built in the 16th century. The construction lasted a hundred years. That is why the exterior of the building combines Gothic and Baroque architectural styles. In the 19th century, ... Open »
Nice
Sainte-Reparate Cathedral was built in 1699 in honor of the patroness of Nice. According to the legend, young Reparata from Palestine professed Christian faith and died in agony for this when she was 12 years old. Angels brought a boat with the young saint to Nice, to the shore of the Angel Bay that was named after this event. The cathedral is located in an old part of the city. It is a typical construction built in baroque style. The ... Open »
OrangeSmile.com - online travel reservation expert providing reliable car rental and hotel booking services. We feature more than 25.000 destinations with 12.000 rental offices and 200.000 hotels worldwide.
Secure Server