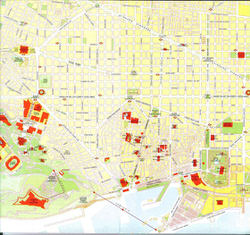 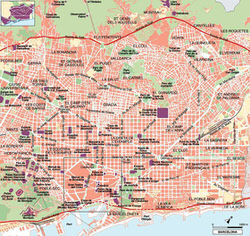 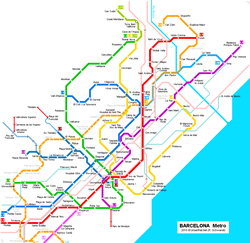 Interactive maps of hiking and biking routes around Barcelona

1. You can zoom in/out using your mouse wheel, as well as move the map of Barcelona with your mouse.
2. This interactive map presents two modes: 'Biking Routes' and 'Hiking Routes'. Use the '+' button on the map to switch between them.

This Barcelona map has two modes: 'Railway Network' and 'Landscape & Rural Map'. Use the '+' button on the map to navigate.

Our guide to Barcelona

Spaniards have never been very punctual. This national trait is not a secret to anyone and so it is a typical reason for numerous jokes. Residents of Barcelona are accustomed to have a very late lunch, so local cafes start filling with visitors only after the noon. Dinners here are also fairly late, so many restaurants are open until midnight. When communicating with local residents, you should try to avoid … Open

Fort Montjuic. A funicular road will take you from Barceloneta to the other side of the city. This is the place where visitors will be able to see Montjuic Mountain. This mountain was one of the most important places during the Olympic Games that took place in Barcelona in 1922. The mountain has simply everything for a good holiday and great pastime. One can easily spend a whole day here. The top of … Open

Historic mansion El Palauet Living Barcelona, in which antiquity meets modern style and both perfectly complement each other, is known as one of the best hotels in the city. Ceilings in El Palauet still have the original detailed fretwork, and lighting is activated by clapping. Unique mosaic floors, frescos, stained-glass windows, a built-in audio system, home cinema and Wi-Fi make guestrooms both beautiful and very … Open

Hotel Barcelo Raval is located in a ten-story ellipsis shaped tower that is surrounded by a tiny metallic mesh. Its modern avant-garde style was developed by a big team of designers, headed by Jordi Galí. They managed to create a state-of-art lightning system for both outside and inner premises. Numerous white lamps in the hall create absolutely stunning atmosphere; the hotel’s restaurant is decorated with … Open

Frugal tourists will enjoy walking along Carrer de Pelai street. Here, reasonably priced brand stores are centred. Zara, Camper, C & A, Discos Balada, Mango and Bershka boutiques are among them. Big seasonal sales are always organized there. The biggest discounts usually come in on Christmas Eve. La Rambla street will provide weight of pleasant experience. Here, is one of the largest and most interesting souvenir … Open