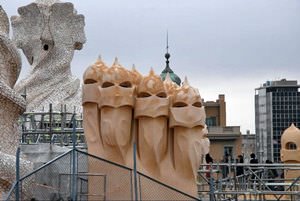 Barcelona remains one of the most frequently visited destinations in Europe, so there’s no wonder that it’s getting harder and harder to find landmarks where you won’t find yourself surrounded by other travellers. However, it is still possible to find unusual places and make unique pictures in the city. For example, make a walk along Via Laietana

Street and find a “house with eyes”. The façade of this unusual building was developed by designers from Alonso&Balaguer. Nowadays, the building is used as a five-star hotel, so it is possible to look at it both outside and inside.
Unusual weekend in Barcelona: accommodation in extraordinary hotels
Barcelona Rock is a very unusual hotel that was open specifically for travellers who love rock-climbing. Owners of the hotel 100% succeeded in that. The hotel looks like a hundred metre high …

Park to enjoy its peaceful setting. The park is located on Av. Diagonal

Street and is fortunately less popular than the internationally famous Parc Güell. Diagonal Mar is mostly visited by locals; this is a charming place with special playgrounds for children.
In the evening it’s high time to make a walk to Torre Agbar

, which is known as one of the most stylish modern sights of the city. When darkness falls on Barcelona, the façade of the skyscraper is skillfully lighted with a beautiful illumination that makes the tower look like a giant fountain and a geyser – this was the original idea of architect Jean Nouvel. Copyright www.orangesmile.com
Barcelona design-hotels for stylish travellers
The new hotel Mandarin Oriental is located in the heart of Barcelona. Modern design of the new accommodation was developed by talented Patricia Urquiola. White colored metal mesh with …

Open
Do you want to take a walk in one of the most unusual markets in whole Spain? If yes, simply head to Mercat de Sant Antoni

. You will find this market in the historic district of El Raval

. The market is open in carriages of an old train. The carriages were restored and covered with a skilled artwork, making them look very unusual and creative. The history of this market is no less interesting. The nearby market of Sant Marti required restoration, so it was temporarily closed and vendors were offered to move their stalls to the carriages installed not far away. The Sant Marti was successfully restored, but it was decided not to demolish the “trading train”. That was Mercat de Sant Antoni that is still open. 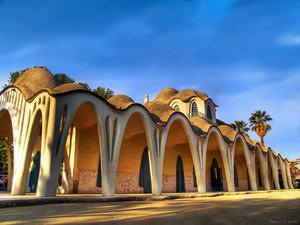 If you want to buy the most unusual souvenirs in Barcelona, one way to do that is to head to Mercat del Encants. This flea market was founded in the 14th century, and that makes it one of the oldest markets in whole Europe. The market is located not far away from Torre Agbar and works several times a week. It will be hard to find a place with bigger choice of interesting items in the city. Experienced travellers advise to visit the market as early as possible. If you arrive there on 7am, you’ll be able to purchase really unique items.
Top places to stay in Barcelona - most luxurious hotels
It is simply impossible to pass Casa Fuster by without noticing it. The building of the hotel itself is an architectural masterpiece and a historic landmark added to the list of UNESCO World …

is a simply ideal place for a romantic evening in Barcelona. Here, on Carrer de la Reina Cristina

Street 7, you will find the magnificent Can Paixano champagneria. Guests of the venue are treated with amazing pink champagne. While enjoying the drink, you will be able to observe the surrounding historic streets. This bar is not known to the majority of tourists, so it is mostly visited by locals. 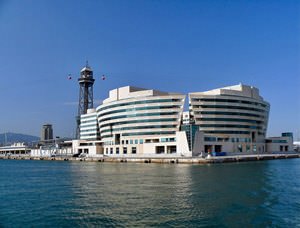 Rambles Street is one more marvelous place in Barcelona, where travellers can make a ton of unbelievable photographs. For many years this street has been home for so called “living statues” – one of the main symbols of Barcelona. Numerous talented street actors, dressed in fancy costumes, perform on this street every day. They can skillfully freeze, becoming immovable like real statues, and then suddenly “become alive”, thrilling people who pass by. Street performers can be found on Rambles from early in the morning till late at night. Barcelona suburbs are also home to many wondrous places of interest, including miniature medieval towns, old wineries and the mysterious Pyrenees with breath-taking views.

This article about ideas on extraordinary weekend in Barcelona is protected by the copyright law. You can re-publish this content with mandatory attribution: direct and active hyperlink to www.orangesmile.com.
Barcelona - guide chapters 1 2 3 4 5 6 7 8 9 10 11 12 13 14 15 16 17

Michelin-starred restaurants in Barcelona
♥   Restaurant 'Caelis' Barcelona. Type - Creative. 0.5 km from the center. On the map

♥   Restaurant 'Moments' Barcelona. Type - Creative. 0.5 km from the center. On the map

♥   Restaurant 'L’Olivé' Barcelona. Type - Regional cuisine. 0.6 km from the center. On the map

Survived castles around Barcelona
♥   Castle 'Castle of Montjuic' Catalonia, 2.7 km from the center. On the map

Art galleries in Barcelona and around
♥   Art museum 'Fundació Antoni Tàpies' Barcelona, 0.7 km from the center. On the map

♥   Art museum 'Fundació Joan Miró' Barcelona, 2.2 km from the center. On the map

Valencia
There is no need to go to China for top-quality Chinese tea - look for Soins de The teahouse here on the market. Besides dozens of tea varieties, you can find all the necessary attributes and accessories for a tea ceremony. In search of gastronomic delights, visit the favorite restaurant of Ernest Hemingway - La Pepica opened back in 1898. Many celebrities other than the ... Open »
Alicante
Ayuntamiento de Alicante is one of the most interesting architectural attractions. Don’t rush to leave the picturesque street to admire the town hall. If you come to the front stairs of the building and take a close look to the column, you may notice an incomprehensible inscription ‘cota cero’. Only a few tourists know that right here on the stairs of an historic building ... Open »
Bordeaux
If you visit Bordeaux in the summer, one of the best attractions will be "Water Mirror" fountain. The opening of the fountain took place in 2006, and it does not look like a fountain in the usual sense of the word. A huge swimming pool with an area of 3,450 square meters is equally loved by both adults and children, and it would be difficult to find a better place to cool ... Open »
Cannes
Having explored the most picturesque and iconic landmarks in Cannes, many tourists start thinking about purchasing souvenirs. It is better to buy them in a special store, Nice Cadeaux, which is located a couple of minutes away from the railway station on Rue Venizelos Street. The choice of items for sale in this shop is simply amazing and is much different from the goods that ... Open »
Nice
Nice is one of the best places in the whole country to enjoy new discoveries and get acquainted with the culture of elegant France. If you do not want to spend several days examining regular landmarks of the city, there is a simple and comfortable way to do that – to make an excursion ride on La vieille ville. The train makes a full circle in the historical center of Nice in ... Open »
Madrid
Shopaholics love, foodies adore, and romantics worship Madrid. The reason for that is simple – the magnificent city never ceases to amaze all of them. If you have visited Madrid more than once and are well-aware of the main landmarks of the city, it’s high time to pay attention to the non-standard excursion destinations and secret places of the city. Not even all locals, ... Open »

Walk through hidden local streets, sneak to a small cafe, breathe and enjoy Barcelona from inside. Stay out from the beaten track during your city weekend, discover the soul of Barcelona as a real travel gourment. Follow our guide, take one of the exclusive services and spend your time in Barcelona unforgettably and with a full passion!