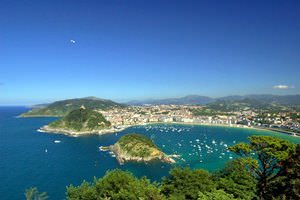 Palacio de Miramar, Municipality of San Sebastian, Iglesia de San Vicente, and Teatro Victoria Eugenia are the architectural landmarks for not only tourists, but also for residents of San Sebastian. The majority of these monuments were created several centuries ago. They witnessed many important events, so besides the architectural value for Spain, these landmarks are of a great historic importance. In this review, you will be able to get acquainted with the main architectural sites of San Sebastian. Also, we will look at them from an unusual point of view – only interesting facts and photos, which come together with a 3D visualization of every monument. Use our unique technology to fly over all architectural places of interest of San Sebastian – the video is at your fingertips. 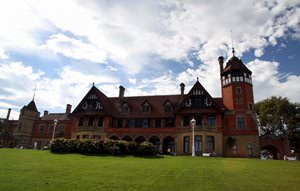 Facts:
» To build a summer cottage, the members of the Spanish royal family purchased the land at the coast of the bay. The residence was finished in 1893.
»  The three-storey palace is located in the upper city. Servants lived on the upper floors. The basement was used for household needs. It is just a few meters from the beach.
»  To link Antiguo with the other district of the city, the tunnel for vehicles was specifically built. The tunnel is dug along the embankment. There is a garden above it. Its territory belongs to the monastery.
»  In 1929, the government purchased the estate. It was assumed that the President of the Republic would stay here when visiting the city. Then, the palace was returned to the royal family.
»  Its total area is 34 000 m2. The green area is also open for the public. The citizens can walk along stone paths among well-kept lawns.
»  In the mansion, some rooms - the library, the White Hall, the Music Saloon, and the dining room - have remained unchanged since the foundation.
»  Parties are also organized in Palacio de Miramar. The San Sebastián International Film Festival is also held here. 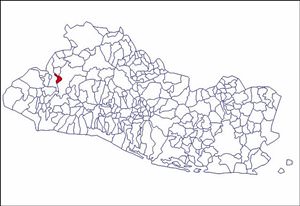 Facts:
» In 1887, the cultural building was constructed on the city embankment. The opening ceremony was visited by the Queen.
»  It was the heart of social life: board game and fencing tournaments, different events, and concerts were held here.
»  The room with light yellow sandstone walls attracted many players. Not only local aristocrats, but also representatives of the European middle class preferred to play billiard here.
»  The Big Casino has seen serious struggles until the middle of 1920. It was the most exquisite casino in Europe at that time.
»  When the gambling was prohibited, the building served as a hospital and then belonged to the Tourist and Entertainment Center. During the First World War, political refugees, for example, Mata Hari, found a shelter here. In 1940, the city municipality settled in the building.
»  The two-storey building resembles a palace with its towers and carved domes. The square in front of the building is a well-kept parking area.
»  You can see the palace and its surroundings on postcards. It is a magnificent city landmark. 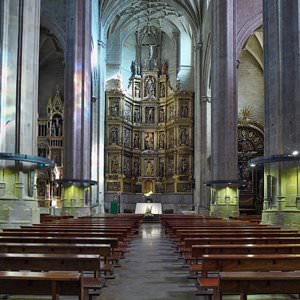 Facts:
» The new church was built in the 15th-16th century at the site of the temple destroyed by fire. It is located in the historic quarter.
»  Over the centuries, San Vicente belonged to the other church. It gained independence in 1940.
»  In its exterior, you can see some elements of the destroyed building. Later, the covered gallery, prayer rooms, and a place for choirs were added to the main building.
»  The altar panels depict Christ. The altar was made in 1586. At the church, you can see the organ of 1868. There are wheel windows on the outer wall of the temple. The religious building is characterized by the late Gothic architectural style.
»  The inner space is divided into 3 sectors. Cross beams are attached to outbuildings and additional pedestal for worships. Tower pillars support the ceiling.
»  San Vicente is officially named The Basilica de los Santos Hermanos Martires, Vicente, Sabina y Cristeta.
»  According to the historical chronicles, martyrs Vicente, Sabina and Cristeta were sentenced to death upon the order of the Roman ruler Diocletian. They were buried in the rocky soil. 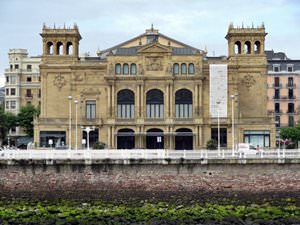 Facts:
» The center of citizens’ cultural life is the place located on the embankment.
»  At the beginning of the 20th century, the members of society offered to create the place for art connoisseurs in the resort area.
»  To construct it, the administration purchased the land in Oquendo Gardens. 70 years later, the theater became the property of the city hall under the terms of the agreement.
»  The theater was opened in 1912.
»  Music stage performances are especially popular with the public. They are similar to the operetta when monologues and dialogues alternate with dances. This form of stage art attracts expressive Spanish people.
»  The award ceremony is held at the film festival here.
»  There are two halls in the rectangular building that has a total area of 2.5 thousand m2. The outer walls are faced with light sandstone. Panels are decorated with sculptures.
»  The dome in the audience hall is also a masterpiece. Its painting is a restored fresco. It has an allegorical meaning: the sun is in the light horse-drawn carriage. The sun is welcomed by children.

Facts: » Anoeta is a home stadium for trainings of the local football club.
»  It is a multifunctional sports complex. It was opened in 1993. Its capacity is 32 076 spectators.
»  The members of the rugby club train in the playing field too.
»  According to the restoration plan, the capacity was increased up to 42 000 sports fans in 2007. To do this, it was necessary to remove running tracks. It was planned to build a network of stores and a hotel. The project was rejected by the city administration due to big investments.
»  The manager of the football club introduced the issue on selling both club and stadium. This solution was not supported. It was planned to reconstruct the playing field, equip it with modern technologies, and increase the number of spectators’ seats on the stands.
»  The stadium is distinguished by its round shape and wave-shaped roof. There are running tracks right behind the playing field. It deters some spectators watching the game.
»  There are new spotlights right on the dome illuminating the stadium at nights.

Facts: » Night life is really diverse in the city. One of the entertainment venues is the Bataplan Club.
»  Don’t come here too early. Bataplan opens its doors at about 2 am. Then, 5 hours of unbridled joy are guaranteed.
»  The entrance is paid and the beverage is included in the price. You can also use a free invitation card if you come and ask the barman for it beforehand.
»  If you are tired of the noisy hall, you can visit an outdoor terrace.
»  The club is very popular and always full of people. The public is varied: local people, tourists, and students.
»  The Bataplan Disco has existed for 35 years. A lot of world-famous celebrities prefer exactly this place. The international film festival is also held here.
»  Besides local DJs, the administration also invites performers to host the show.
»  According to such magazines, as Deejay and Vicious, Disco was the best club in Spain from 2008 to 2010.
»  Electronic music is a typical background for visitors. You can see the announcement of the show on the website.

CONTINUE - PART II »»
This guide to architectural sightseeing in San Sebastian is protected by the copyright law. You can re-publish this content with mandatory attribution: direct and active hyperlink to www.orangesmile.com.
San Sebastian - guide chapters 1 2 3 4 5 6 7 8

Build your walking routes in San Sebastian on the landmark map

Architectural landmarks in the regions around San Sebastian

Bilbao
Believers came to the Basilica de Begona to worship the patroness of sailors, the Virgin Mary. Services are daily held in the religious institution. Grand festivals dedicated to the Virgin are held here twice a year. The church for her glory started to be built in the 16th century. The construction lasted a hundred years. That is why the exterior of the building combines Gothic and Baroque architectural styles. In the 19th century, ... Open »
Bordeaux
Cathedrale Saint-Andre was reconstructed many times. According to the chronicles, there had been buildings built in the 3rd century at the site. This construction was first mentioned in chronicles in 814. The Normans destroyed it. At the beginning of the 11th century, the first stone was laid in the cathedral's foundation in commemoration of the marriage of Louis VII and Eleanor of Aquitaine. In 1130, the northern Porte Royale ... Open »
Madrid
Palacio de Cibeles was originally designed as the central office of the telephone service, post and telegraph of Spain. The post office was built in 1918 and was called the Palace of Communication. Palace of Communication now houses the City Hall. This monumental building, decorating the area, represents one of the four pillars of modern civilization, power. Palacio de Cibeles consists of two buildings integrated with each other. This ... Open »
Barcelona
Museu Nacional d Art de Catalunya was created by merger of the collections of the Museum of Modern Art and the Museum of Art of Catalonia. The Romanesque Collection of the museum is considered one of the most complete in the world. It was formed on the basis of the unique Romanesque frescoes department; they are exposed at an appropriate architectural background. That’s the largest museum of Catalonia and the most important center of Spanish ... Open »
Marseille
Cathédrale Sainte-Marie-Majeure is located at the site of the wooden church built in the 5th century, which is proved by excavations. In the late 19th century, it was decided to demolish the old building upon the order of Napoleon III. The citizens were not satisfied with this decision and held a protest demonstration. The old building was not dismantled completely. The new cathedral was built near it. The locals call it “strips on the ... Open »
OrangeSmile.com - online travel reservation expert providing reliable car rental and hotel booking services. We feature more than 25.000 destinations with 12.000 rental offices and 200.000 hotels worldwide.
Secure Server