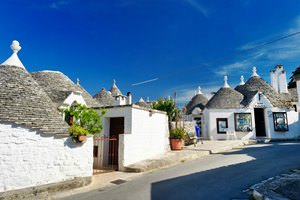 Besides the unique trullo houses, you will have an opportunity to see many interesting attractions and cultural centers in Alberobello. The Santi Cosma e Damiano Basilica is the main religious symbol of the town. The church got its name after the main patron saints of Alberobello. The spectacular basilica was built in the 18th century. It has been the highest building in the town since then. Santi Cosma e Damiano has completely retained its outer and inner design. Step inside the church to see its main treasure – relics of the patron saints. Every year, thousands of pilgrims come to Alberobello from all parts of Italy to bow to the relics. Local people organize a wonderful holiday in honor of Saints Cosmas and Damian.
Guide to Alberobello sightseeing - things to see and to visit
South Italy is a fantastic place where tourists can relax on the coast of the Adriatic Sea. This is also the location of the charming town of Alberobello. This is a small settlement that, …

Open
Museo del Territorio Casa Pezzolla is the most interesting museum in the city. It is open in a large architectural complex that consists of 15 trulli connected with passages. The museum’s collection is big and diverse. Visitors can see antique furniture and household items, admire gorgeous artworks and precious historic artifacts. The main purpose of the museum’s design team was to keep as much of the original décor as possible. Some trulli meticulously recreate the traditional design of the past centuries. The museum offers audio guides in different languages to make an excursion even more exciting.
Trullo Sovrano is a no less interesting museum that is open on Piazza Sacramento. This museum is open in one of a few two-story trullo houses in Alberobello. The building is an important architectural attraction. Step inside to see the typical design of local houses in the 18th century. You will have an opportunity to see how residents of Alberobello lived hundreds of years ago. Trullo Sovrano exhibits old tableware, household items, and handmade furniture. Don’t forget to take a look at old photographs of the town at the beginning of the 20th century. Copyright www.orangesmile.com
Your active city break in Alberobello. Attractions, recreation and entertainment - best places to spend your day and night here
What interesting activities can tourists find in Alberobello besides walking on historic streets and admiring local attractions? If you are a fan of active recreation, the outskirts of the …

Open
Casa D’Amore is an important architectural landmark in Alberobello. This is a symbol of freedom for residents of the town. When the tax, which was causing local people to demolish their houses again and again, was finally abolished, the building method changed in the area. Casa D’Amore was the first building with terracotta and mortar in Alberobello. It was built in 1797. This house has one more interesting feature – a balcony. Houses with this architecture are not typical for the settlement. 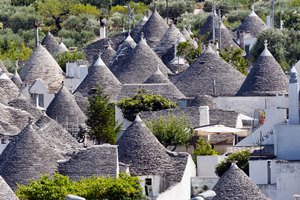 The entire Alberobello is virtually an interesting open-air museum. A simple stroll can easily turn into an exciting excursion because there are gorgeous centuries-old buildings at every step in this town. The historic quarter of Rione Monti is the most interesting and attractive part of Alberobello. This is where tourists can see the traditional trullo dwellings. All streets in Rione Monti are pedestrian-only. As the area is located on a hill, this part of the town is great for admiring panoramic views. Don’t forget to take a stroll on Corso Vittorio Emmanuele. This promenade also has several interesting architectural attractions. Corso Vittorio Emmanuele will lead you to Piazza del Poppolo, the square famous as one of the best viewpoints in Alberobello.
Shopping in Alberobello - main shopping streets, outlets and boutiques
Do not expect to find multiple designer boutiques and large shopping malls in Alberobello. There are simply none of them here. Instead, you will find dozens of small shops, souvenir stores, … 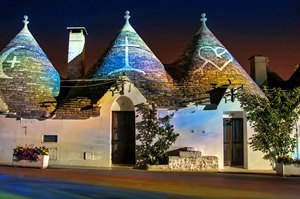 If you feel like this small town doesn’t have enough attractions, do not get upset. Alberobello suburbs are also rich in interesting historic landmarks. Many tourists visit Santo Stefano Castle that was built in the second half of the 11th century. For many years, the castle was the property of the Benedictine monks. Later, Maltese knights claimed it. Today, the majority of halls of the old fortress are open for excursions. You can explore the territory and then enjoy breathtaking views from the observation points. It takes no more than half an hour to reach another popular landmark, Conversano Castle. This old fortress is also an important historic attraction of the 11th century. The castle has a medieval tower that is open for tourists.

In the section below, you can get one of our excursion, activities or city discovery tours over Alberobello and surroundings. Our website offers 10-30% lower ticket prices, when compared to the offline purchase on the spot.

City tours, excursions and tickets in Alberobello and surroundings

This guide to cultural sights Alberobello is protected by the copyright law. You can re-publish this content with mandatory attribution: direct and active hyperlink to www.orangesmile.com.
Alberobello - guide chapters 1 2 3 4
Reference information
Map of all palaces

Cathedrals and basilicas near Alberobello
♥   Basilica Cattedrale di Maria SS. della Madia, Monopoli, 19 km from the center. On the map

Photogallery of cultural heritage of Alberobello

Excursions over cultural sights of neighbours of Alberobello

Apulia
There is a rather unusual excursion object that is incredibly popular among tourists in Castellana. We are speaking about unique karst caves with total length of about 3 kilometers. A walk through caves will be an unforgettable adventure for the whole family. In the immediate vicinity of Andria is another object of world scale. The beautiful Castel del Monte is visited ... Open »
Bari
The old part of the city is surely the most interesting for tourists as here are concentrated all main attractions of Bari. This is the place where you can see the oldest buildings in the city – the so called ancient Barium. The buildings here were built yet in the era of the Roman Empire. In the territory of the old town you will find approximately 30 ancient churches and ... Open »
Brindisi
Chiesa di Santa Maria is one of the most famous religious landmarks of Brindisi. The beautiful church is located to the west from the Cathedral Square. The magnificent building is a skillful combination of the Gothic and Roman architectural styles. Don’t forget to enter the church to see an ancient icon of Santa Maria and an old column that dates back to the 9th century. ... Open »
Agropoli
One of the main symbols of the city is an ancient fortress dating back to the 15th century. Although the first defensive structures were erected on its site in the 6th century, the fortress has been perfectly preserved to the present day and is the most important historic landmark of Agropoli. The powerful castle is of unusual triangular shape, once it was surrounded by a deep ... Open »
Budva
Santa Maria Church belongs to later religious monuments. The construction of the church took place in the 9th century. The church’s walls are home to several unique religious artifacts, and the interior of the building is decorated with subtle hand-painted murals and antique frescoes. The Churches of St. Stephen and Holy Trinity remains the most striking architectural ... Open »
Cavtat
A very attractive and interesting architectural site is the church of St. Nicholas. It is an imposing building with a thought-out façade; its interior strikes with its irresistible appearance. Walls of the church have kept many unique religious and artistic artifacts for hundreds of years. The remains of ancient walls that once protected the city from invaders have also ... Open »

Culture guide to Alberobello. Which fascinating sights to visit once you are in Alberobello: temples, churches, museums, theaters and castles. Recommendations (with addresses, phone numbers and links) on the places 'must visit' in Alberobello. Plan your own city excursion by using this page info!