Detailed hi-res maps of Procida Island for download or print 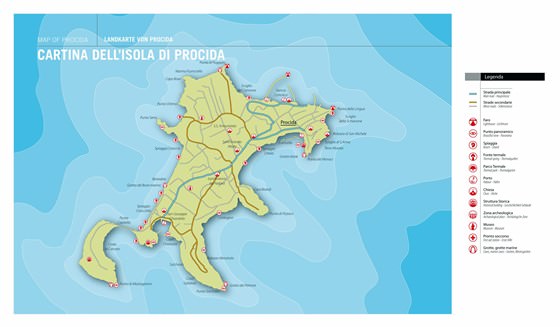 Search for services, infrastructure and sights on map of Procida Island

Our guide chapters over Procida Island

Procida is the tiny island of volcanic origin, the smallest in the Bay of Naples. The island is home to about 10,000 people. Procida features amazing atmosphere of national color, as locals cherish their traditions and customs passing them on from generation to generation. For many hundreds of years, fishing has been the main livelihood of indigenous population. The eastern part of the island is inhabited by … Open

The abbey of St. Michael the Archangel is certainly one of the main attractions of Procida. This is the oldest building on the island, built in the 7th century by four Benedictine monks. Rebuilt in the 11th and 16th centuries, the monastery still towers over the island on the cliff of Terra Murata. Surrounded by powerful rocks, the abbey sheltered within its walls the local fishermen from pirate raids for many years. … Open

Foodies will like the nearby family-run hotel Crescenzo that is a single complex with one of the best restaurants on the island. Crescenzo restaurant has being serving customers since 1953; it specializes in dishes of national cuisine. According to many travelers, here you can taste the best fish cooked following original old recipes. Fans of beach rest won’t be disappointed too, as the fully equipped private … Open

Be sure to visit the neighboring Vivara. You don’t even need to float anywhere – there is the most common bridge between the islands. Vivara is a reserved territory, and, therefore, completely uninhabited. Here in a variety of nests live different birds, including very rare species. Vivara is visited not only by nature admirers and novice ornithologists but also by the prominent scientists from different … Open

Of course, the most important ingredient in most dishes of the Procida cuisine is fish. It is not surprising: every day dozens of fishing vessels unload their fish to the shore, from which they prepare delicious dishes in several dozen restaurants of Sancho Catolico and Corricella. Seafood has always been very important for the inhabitants of the island, and a peculiar, very symbolic dish "fleeing fish" is an … Open

Traditions and mentality of Procida Island

It is interesting that even though the Italians like to communicate, they rarely address strangers. On the other hand, if you like a local resident, you can talk to him not only about the weather or politics but on any topic, even about classical German philosophy. If the Italian considers you his friend, many doors will open before you. So it has become customary that domesticity permeates all local society. Many … Open