Detailed hi-res maps of Piacenza for download or print 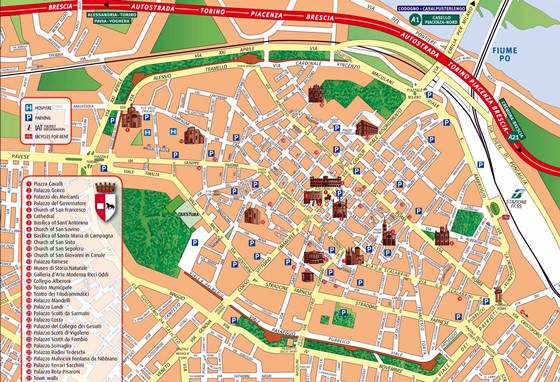 The actual dimensions of the Piacenza map are 2161 X 1474 pixels, file size (in bytes) - 936371. You can open this downloadable and printable map of Piacenza by clicking on the map itself or via this link: Open the map.

City tours, excursions and tickets in Piacenza and surroundings

Search for services, infrastructure and sights on map of Piacenza

Our guide chapters over Piacenza

The Museum of Oil and Gas is a special cultural institution. Despite the serious theme, it is considered one of the most popular with tourists with children. The museum's exposition is devoted to the history of the oil industry, which up to the present time is of great importance for the city's economy. Visitors are told about the technical means used in the beginning of the 20th century for oil and gas extraction. … Open

Start your acquaintance with the history of the city from visiting Municipal Museum built in the 16th century. It hosts several collections of paintings and sculptures. The most valuable item of the collection is a picture of Botticelli, which is called "The Virgin and Child with John the Baptist". In the center of the city you will find one of its main landmarks - Cathedral of San Antonio. It was built in the 12th … Open

Maps of Parma
Each year the Finistere Aperte (Open Windows) program is held within the festival. The program enables the guests and participants of the fest to take part in the process of production of ham as well as suggests various tastings, exhibitions and festive concerts. A production center of the popular ham treat is considered to be the Langhirano commune. The area hosts several ... Open »
Maps of Milan
Milan itself is the capital of Italian fashion and not surprisingly that here pass the most important and influential fashion events. Every year, Milan hosts the Salone del Mobile design festival, which is the largest furniture fair in the world. Here, art meets design and demonstrates the interiors of the future. There is even no need to speak about Milan Fashion Week, which ... Open »
Maps of Bergamo
In early September, a truly colorful event starts - it's Notti di Luce, a festival during which the so-called Stone City shimmers with bright colors. Jazz performances, exhibitions of fine arts and photographs are organized within the framework of the festival, and a separate entertainment program is prepared for children of all ages. There is no need to pay for the entrance ... Open »
Maps of Como
The beautiful holiday always attracts many foreign guests; its main events are colorful carnival processions. On the festival days, parades take place in the central streets of the city. Their participants dress up in beautiful traditional costumes. Special dolls are made especially for the holiday. In recent years, the festival program has become really diverse. Street ... Open »
OrangeSmile.com - online travel reservation expert providing reliable car rental and hotel booking services. We feature more than 25.000 destinations with 12.000 rental offices and 200.000 hotels worldwide.
Secure Server