Detailed hi-res maps of Ostuni for download or print 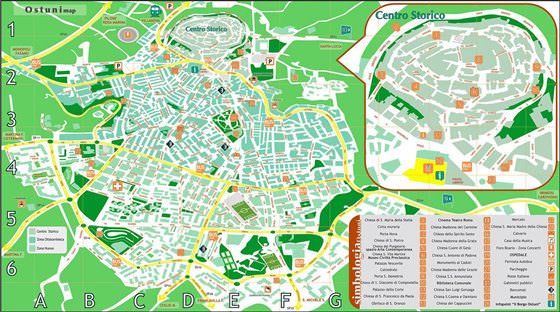 The actual dimensions of the Ostuni map are 1600 X 890 pixels, file size (in bytes) - 473417. You can open this downloadable and printable map of Ostuni by clicking on the map itself or via this link: Open the map.

Search for services, infrastructure and sights on map of Ostuni

Our guide chapters over Ostuni

Would you like to visit a bishop’s palace? In Ostuni, the palace is situated on Cathedral Square. It is not hard to find the building – there is Acro Scoppa Bridge close to the palace. Norman rulers built this castle in 1148. Unfortunately, the building turned into ruins four centuries later. Only the foundation remained, and so it was decided to build a new palace on that foundation. The earthquake, which … Open

Maps of Brindisi
Every year, Brindisi hosts interesting national celebrations and events that never cease to attract many curious travelers. Processione del Cavallo Parato remains one of the most famous and popular national celebrations. The name can be translated as “a procession of the decorated horse”. The holiday takes place 60 days after Easter. The Cathedral Square is traditionally ... Open »
Maps of Bari
Bari's residents are kind-hearted and open. For their qualities, they received the nickname of "Terroni" literally translating as "people of the earth". The locals do not take offense, but rather poke fun at this because only people with an exceptional sense of humor can laugh at themselves. Another feature of local residents is a very respectful attitude to parents, especially ... Open »
Maps of Budva
The city on the Adriatic coast is primarily attractive for its location, and therefore locals have long been accustomed to the influx of tourists. Residents of Montenegro's resort capital are always ready to help, despite being naturally restraint. Their character is somewhat pragmatic, steadfast and straightforward. At the same time, they have a relaxed attitude to life and ... Open »
OrangeSmile.com - online travel reservation expert providing reliable car rental and hotel booking services. We feature more than 25.000 destinations with 12.000 rental offices and 200.000 hotels worldwide.
Secure Server