Detailed hi-res maps of Nimes for download or print 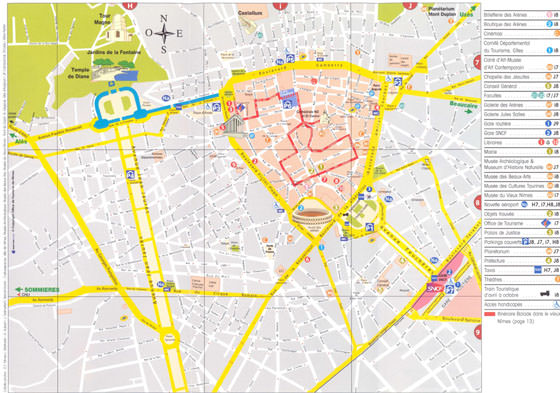 Search for services, infrastructure and sights on map of Nimes

Our guide chapters over Nimes

No other city of France can be proud of such rich ancient times heritage. The central part of the city is the location of a huge arena that was built 2000 years ago. Even these days the arena is used to conduct theater performances, concerts and other cultural events. The amphitheater has become the signature place of Nimes. It does look very unusual and looks more like the famous Coliseum than an ancient monument … Open

Not far from the temple tourists will find a significant architectural landmark being an elegant arch named in honor of the first emperor of the Roman Empire Augustus. One of the most ancient buildings in the city is considered to be the Maison Carree. The building was established at the order of the Emperor Augustus. The erection of the temple was dedicated to the grandchildren of the emperor. In the course of the … Open

Nimes is a perfect destination for active leisure offering its guests various kinds of exciting time spending. One of the main entertainments among city guests is hiking though numerous streets. Nimes boasts plenty of majestic gardens and scenic parks. The city offers great many places for calm recreation and sport activity. In a few minute drive from the city center tourists will find an upscale golf center named … Open

Traditions and mentality of Nimes

Now the city has a lot of specialized stores where visitors are offered special clothes and shoes for dancing, and many tourists buy them as souvenirs. At special dance schools and flamenco clubs, everyone can take a couple of dance lessons. Nimes is considered one of the country's most “non-French” cities. Many traditions and customs alien to residents of other cities of France have taken root only here. It'd … Open

In Nîmes, you can find a beautiful cathedral consecrated back in the 11th century. The cathedral was repeatedly destroyed and rebuilt over the centuries, so today its appearance represents a combination of different architectural styles. One of the cathedral's main decorations is unique stone bas-reliefs depicting important old Testament scenes. The cathedral is the official residence of the archbishop since 1877. … Open