Detailed hi-res maps of Avignon for download or print 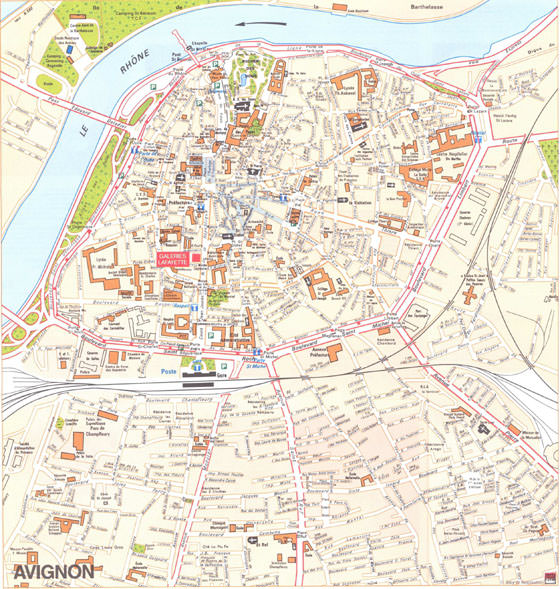 Search for services, infrastructure and sights on map of Avignon

Our guide chapters over Avignon

Hotels with history of Avignon

The popular aparthotel Autour Du Petit Paradis will appeal to fans of yesteryear style. It occupies an incredibly beautiful 17th-century building with a carefully preserved patio garden and an old stone fountain. All rooms feature lovely parquet floors and light wood furnishings. Luxurious furniture in the style of previous years, as well as plenty of velvet and satin fabrics give a touch of elegance. The aparthotel … Open

Travelers who plan to visit Avignon in the warm season, be sure to look into the entertainment complex La Palmeraie. This is a real paradise for sports enthusiasts, the center is in the territory of a beautiful park. Here, in the open air, there are chic pools with jumping docks, and there is a full-fledged gym in the open air and many other sports grounds. It will be very pleasant to relax on a sultry day, visitors … Open

Festivals and events in Avignon

Surrounded by beautiful crenelated walls stretching for more than 4 kilometers, Avignon is one of the largest and most beautiful cities in Provence. The city lives in the traditional rhythm for many hundreds of years and celebrates almost all Catholic holidays with a great scope. The most popular event in Avignon is the Festival D'Avignon - the oldest theatrical festival in Europe, which never ceases to amaze the … Open

Travelers accustomed to rest at comfortable resorts would find Best Western Hôtel du Lavarin ideal. Its rooms are also decorated in romantic style. The hotel can offer its customers a large territory with a pool, a furnished terrace and lots of great places for secluded relaxation. The real pride of the hotel is a garden where you can see the centuries-old plane trees and olives. There is also a great restaurant … Open

For many experienced tourists, Les Halles morning market is a favourite shopping place. It only runs two days a week - on Tuesday and Sunday. It's best to go there right in the early morning. There are always seasonal vegetables and fruits, wonderful olive oil from local farms and meat delicacies there. This market is popular not only with tourists, but also with local residents. It sells wonderful organic products, … Open

The striking modern building houses the upscale hotel Mercure Pont D'Avignon; its interior shines with white and cream colors. All rooms are decorated in simple colors and feature large paintings of Avignon’s prominent attractions. Public areas have unique stylish furniture of black and white colors; plants and flower bunches in vases of fine clay can be seen literally everywhere. In warmer months, a wonderful … Open