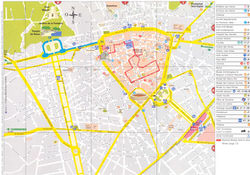 Interactive maps of hiking and biking routes around Nimes

1. You can zoom in/out using your mouse wheel, as well as move the map of Nimes with your mouse.
2. This interactive map presents two modes: 'Biking Routes' and 'Hiking Routes'. Use the '+' button on the map to switch between them.

This Nimes map has two modes: 'Railway Network' and 'Landscape & Rural Map'. Use the '+' button on the map to navigate.

Our guide to Nimes

10. The city has many specialized wine shops. Here you can try and buy the best regional wines, as well as attend tastings. 11. Many locals know foreign languages but reluctant to speak them. Those who have zero French should take a phrasebook with them on a trip. 12. Nimes is the only city in France where you can attend real bullfights. For the past hundred years, bullfighting has been held exclusively on … Open

It is worth noting that corrida is popular in the city, and bullfights are held at Nimes' main attraction - the Arènes de Nîmes. Active travelers will be delighted with such clubs as Laser Game Evolution and Laser Warfare where they can play laser tag, as well as Paintball Pro Nimes. Of course, it's better to come here with friends or family - it will be even more fun than you can imagine. The city also has some … Open

La Tabletterie is a historic store decorated correspondingly. It has been selling chocolate and sweets for dozens of years. All its sweets are made by hand according to special recipes. Before buying, visitors can try many types of sweet products. Thrifty tourists will appreciate prices for classic chocolate bars, and wealthy customers will be able to choose the most beautiful fancy chocolate. The largest … Open

Nimes for children - what to visit

Another beautiful park for lovely walks is called Bois des Espeisses. You can also have a wonderful picnic here, and kids can play at a well-equipped playground. The park is famous for the abundance of greenery and many interesting stone structures. Relatively close is Centre Equestre Poney Club Des P'tits Bouts where small citizens will be able to experience pony riding, which is sure to send any child into … Open

No less interesting site is a cultural center, known as "Square of the Arts" (Carré d'Art). It is housed in a beautiful modern building of regular rectangular shape, the facade of which is completely lined with mirrored tiles. Given the fact that in the immediate vicinity of this building there are unique antique attractions, it looks more than impressive. Today the museum's collection consists of several hundred … Open

Traditions and mentality of Nimes

Travelers visiting Nimes in June will have a chance to participate in the annual festival La Nuit des Jardins dedicated to regional culture and traditions. This summer festival is also held in the open air, one of the main stages for it is equipped in the main city garden. Not only local folk groups but also modern music performers participate in the festival program. Children's playgrounds and attractions are … Open