Preparing your trip to Nimes: advices & hints - things to do and to obey 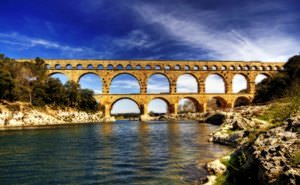 1. Nimes is characterized by quite hot summers. This is not the most comfortable period for fans of outdoor activities and those who expect to travel a lot.
2. In the vicinity of the city, there is a small international airport that regularly receives flights from Liverpool, London, and Brussels. Nimes is connected with other European cities by regular train and bus services.
3. Gourmets should pay attention to restaurants that serve regional cuisine. Here you can try traditional cod dishes, as well as the best meat from local farms.
4. Fans of event tourism will be happy to travel to Nimes from May to August. During this period, the most interesting and large-scale festivals are held in the city one after the other.
5. Nimes would be a great winter holiday destination, and not only due to its mild climate. In winter, interesting entertainment programs are organized for the Christmas holidays. Copyright www.orangesmile.com
6. The city's main tourist office can be found near Maison Carrée. Here you can get a city map for free, as well as a brochure with descriptions of the local attractions in your native language.
7. Most of the historical attractions are concentrated in the Old Town. They are very close to each other, so walking tours are the best option.
Shopping in Nimes - main shopping streets, outlets and boutiques
Nimes boats of many small specialized stores and souvenir shops that are never ignored by tourists. The bulk of the popular stores are concentrated in the central part of the city, and the …

Open
8. Nimes presents a huge selection of hotels, and even the most upscale hotels are pretty affordable in the city. At an early booking, an affordable room can be found even in the city center.
9. Those who want to explore the outskirts of Nimes should use the services of local buses. They run on a schedule every day. You can buy a ticket directly on the bus from the driver.
10. The city has many specialized wine shops. Here you can try and buy the best regional wines, as well as attend tastings.
11. Many locals know foreign languages but reluctant to speak them. Those who have zero French should take a phrasebook with them on a trip.
12. Nimes is the only city in France where you can attend real bullfights. For the past hundred years, bullfighting has been held exclusively on the ancient amphitheater's stage.
13. The largest market in town is Halles de Nimes located in the historic district. It is here that one should look for the best regional products, homemade wines and delicacies.
14. Most souvenir shops are located in the Old Town. Here you can buy not only handicrafts but also gift-wrapped local sweets.
15. Tourists from non-European countries are advised to exchange currency at home before the trip. That's how you can ensure yourself the most favorable exchange rate and minimum commission.

Preparing your trip to Nimes: advices & hints - things to do and to obey You can re-publish this content with mandatory attribution: direct and active hyperlink to www.orangesmile.com.
Nimes - guide chapters 1 2 3 4 5 6 7 8

What to visit being in Nimes - unique sights 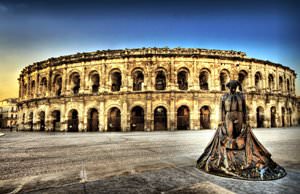 Distance from Nimes center - 0.8 km.
In the 6th - 7th centuries the ancient arena lost its original meaning. During the Great Migration of Nations it was used as a fortress. The arena retained an important strategic importance until the Middle Ages, by the 18th century it was actually converted into a fortress. Outside the walls of the amphitheater were residential buildings, churches and even markets. All buildings were completely destroyed in 1786, when the first large-scale reconstruction of the theater began. Already by 1853 the amphitheater has been returned to its original appearance. Since the middle of the 19th century the most spectacular and interesting events have been held there. … Read further 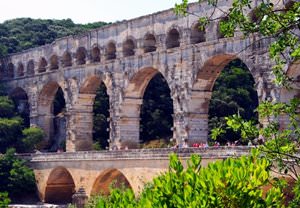 Distance from Nimes center - 19.4 km.
Everyone can take a walk on the bridge during the tour today. Visitors will have the opportunity to explore its incredible stone fragments and enjoy the panoramic views of the surrounding area from the bridge. The ancient monument looks most spectacular in the warm season. The hills located on the banks of the river are covered with dense vegetation at this time. Several hiking trails can be found near the bridge. Very spectacular views of the historical monument are opened from natural viewing platforms. The main mystery of the Pont du Gard aqueduct is related to the exact dating of its construction. The inscription was found on one of the stones of the bridge. It shows that it was built in the prehistoric period. … Read further 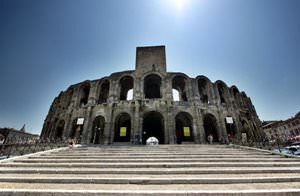 Distance from Nimes center - 28.4 km.
By 1825, they were all resettled, and already in 1830 the first theatrical performance took place in the amphitheater. During numerous reconstructions, architects managed to preserve the former grandeur of the ancient monument. The length of its ellipsoidal arena is 136 meters, and its width is 107 meters. The building has also preserved its incredible acoustic features. Performances taking place in the ancient theatre will impress even the most experienced travellers. … Read further

Tips for the cities around Nimes

Montpellier
3. The most popular means of transportation among local folks and travelers is a bicycle. It can be rented in one of the numerous rental centers Velo Magg scattered all over the city. Tourist information offices will surely offer the travelers a special city map with all the cycling lanes and routes marked. 4. Most hotels, restaurants, shopping centers and filling ... Open »
Languedoc-Roussillon
3. The region has very favorable climatic conditions, so travelers can have a trip literally at any time of year. Fans of beach holidays would find the summer rest to be the most comfortable, and hikers can safely go for a trip even in winter. 4. Dozens of interesting holidays are held annually in different cities in the region; much of their recreational activities are ... Open »
Marseille
3. Many museums and landmarks, though being free for visiting, may change the working schedule according to the season. Before setting off to the next tour one should specify the working schedule of an establishment for visit in advance. This can be made as in tourist information center so directly in the hotel. 4. Local cafés and restaurant welcome tipping. The tips ... Open »
Rhone-Alpes
3. Lyon is famous for its fine dining restaurants; many popular places are mentioned in famous tourist and gastronomic guides. Often, prices in these restaurants don’t differ from those in nearby dining places. 4. Those planning to include a visit the Musée des Beaux-arts de Lyon in their excursion program have to get a special ticket. It gives the right to inspect not ... Open »
Grenoble
3. Bike is also a common type of transport in the city. You can easily rent a bike in one of numerous Métrovélo rental offices. The daily rental price of a bike is around 5 euros. Tourists are also welcome to rent a bike for a week. This will cost you 15 euros. There are many special bicycle roads in the city, all major shopping centers and government agencies have special ... Open »
Saint-Tropez
3. An optimum way to pay for purchases and services is national currency. The currency can be exchanged in any bank or a private exchange office of the city. However the resort has adopted a developed system of cashless transfers and most of the institutions and establishments accept international credit cards. Cash will be needed to pay for goods on local open markets and for ... Open »

Travelling to Nimes - advices and tips. What should be provisioned in advance, the rules you might want to follow, and the things you better avoid doing in Nimes. We help you to make your trip smooth and easy, with no unexpected surprises.