Preparing your trip to Grenoble: advices & hints - things to do and to obey 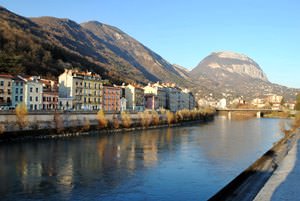 1. Tram is the most convenient type of public transport as it can easily get you to any area of the city. The fare for one ride is 1.3 euros. Tickets can be purchased in advance at kiosks or from conductor in a tram. Travelers, who expect to use public transport, should not forget that conductors often do not accept paper money of high denominations (20 EUR and higher).
2. In addition to trams there are more than 25 bus routes in the city. If during the daytime numerous buses ply around the city, at night they are replaced by noctibuses. The fare in them is slightly higher than in ordinary buses.
3. Bike is also a common type of transport in the city. You can easily rent a bike in one of numerous Métrovélo rental offices. The daily rental price of a bike is around 5 euros. Tourists are also welcome to rent a bike for a week. This will cost you 15 euros. There are many special bicycle roads in the city, all major shopping centers and government agencies have special bicycle parking nearby.
4. The period from July to August is considered the hottest time of year. During these months the temperature rarely falls below 30 degrees. Travelers, who expect to devote much time walking around the city, are recommended to make a trip during the off-season.
5. Fans of gastronomic tourism should definitely not forget to buy Guide du Dahu, which describes hundreds of restaurants, bars and cafes. You can buy it almost everywhere as the guide is sold in newsagents and tourist offices. The cost of the catalog is about 2.5 euros. Copyright www.orangesmile.com
6. Walnuts are known as one of the most popular souvenirs for travelers. The nuts are usually sold in specialty stores. This is a special sort of walnuts, which is grown only in the vicinity of the city. All packages with the locally grown nuts have a special mark - «appellation d'origine controlé».
7. Gourmet visitors should definitely try the local fondue, which is served in literally any restaurant. Connoisseurs of cooking say that the local fondue is distinguished by a truly unique taste.
Your active city break in Grenoble. Attractions, recreation and entertainment - best places to spend your day and night here
Paul Mistral Park remains one of the most favorite places of rest among both residents and tourists. A huge territory of the park is equipped with cozy gazebos and benches. Here you can …

Open
8. Fans of music should definitely visit Grenoble in March, when the city hosts a wonderful jazz festival. The event traditionally attracts fans of this musical direction from different countries.
9. Guests of the city should not forget to make a trip to Paris, which is connected with Grenoble by a system of TGV trains. A trip from one city to another will take about three hours.

Preparing your trip to Grenoble: advices & hints - things to do and to obey You can re-publish this content with mandatory attribution: direct and active hyperlink to www.orangesmile.com.
Grenoble - guide chapters 1 2 3 4 5 6 7 8 9 10 11 12 13

What to visit being in Grenoble - unique sights 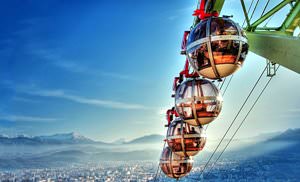 Distance from Grenoble center - 3 km.
Cabin run is very smooth, so even those who are afraid of heights overcome 673 meters of way unnoticed. Despite the fact that in comparison with global giants, Grenoble cable car is relatively short, it remains one of the confident leaders among urban constructions. Locals treat cable car as one of the main symbols of the city and call its gondolas ‘bulles.’ The lower cableway station is situated at the waterfront of Grenoble. Surprisingly, there is never a queue out there. … Read further 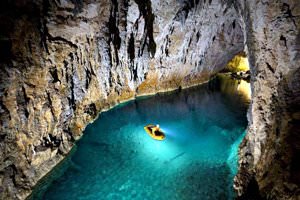 Distance from Grenoble center - 10.6 km.
With regard to this special feature, the entrance into the cave is only possible for experienced speleologists and only with the appropriate equipment. The tourists can wander in the picturesque area and look into the huge funnels whose rocky walls are lush with the lush plants. Most of the underground vaults are constantly flooded. Only a few passes can be thrown through, so the researchers always take inflatables always with. Some Höhletunnel are completely flooded and therefore attract the divers. In this cave, Peter Watkinson, who has immersed himself in the vast depth, set the world record in 1967. … Read further

Tips for the cities around Grenoble

Rhone-Alpes
3. Lyon is famous for its fine dining restaurants; many popular places are mentioned in famous tourist and gastronomic guides. Often, prices in these restaurants don’t differ from those in nearby dining places. 4. Those planning to include a visit the Musée des Beaux-arts de Lyon in their excursion program have to get a special ticket. It gives the right to inspect not ... Open »
Meribel
3. The nearest international airport is located a hundred kilometers away from the resort. Buses to Meribel depart regularly from Chambéry, Lyon, Grenoble and Geneva airports. 4. Local ski trails become comfortable for skiing in the first half of December. The holiday season in Meribel lasts until April, however, the choice of ski pistes in spring is not as wide as in ... Open »
Courchevel
3. Restaurants and shopping centers accept credit cards, so it’s not necessary to take large amounts of cash. In small shops or modest budget cafes payment with credit card probably won’t succeed. It’s recommended to exchange money only at banks; anyway, some hotels host private exchange offices. 4. Going to fashionable restaurants, you should definitely choose the ... Open »
Lyon
3. One type of ticket is used for all modes of public transport; the ticket price for a single trip is 1.5 euros. Travelers, who expect to use services of public transport actively, are recommended to buy travel cards. They can be designed for a day or a week; when buying a ticket for 10 trips you can reckon on a good discount. 4. Late in the evening the only available mode ... Open »
Val d Isere
3. Service charges are already included in the bill in most restaurants and cafes. As a rule, tips range from 12 to 15% of the total order. If the tip is not included in the total amount, you should simply add another 10 - 15% to the sum of the bill. 4. There are many sports equipment rentals and specialty stores throughout the resort. You can easily rent or buy all the ... Open »
Geneva
3. There are a lot of pedestrian zones in the city, so you should not deny yourself from the pleasure of walking on these beautiful places. 4. The majority of residents and tourists prefer other types of transport like bikes. Motorists are very attentive to cyclists, and you can reach virtually any part of the city using your two-wheeled friend. Not very comfortable ... Open »

Travelling to Grenoble - advices and tips. What should be provisioned in advance, the rules you might want to follow, and the things you better avoid doing in Grenoble. We help you to make your trip smooth and easy, with no unexpected surprises.