Preparing your trip to Merida: advices & hints - things to do and to obey 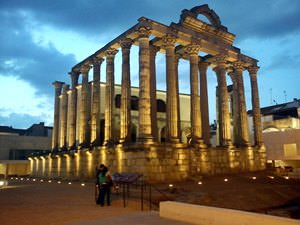 1. In summer, the weather is quite hot in the city - daytime temperature may reach 40 °C. It is not the most comfortable period for fans of hiking and outdoor entertainment.
2. Merida is a popular tourist city, so many locals are pretty good at foreign languages. To show respect for the local culture, be sure to learn a couple of simple phrases in Spanish.
3. There are no large international airports in Merida. You can get here from the surrounding cities by bus or train. Trains from Lisbon, Madrid, and Badajoz, where the nearest major airport is located, regularly arrive in Merida.
4. The city has an impressive size, but all of its main attractions are concentrated in the historic district. If you don't want to miss interesting antique structures, it's best to explore the historical center on foot.
5. Souvenir shops and markets sell many archaeological reproductions. Some unscrupulous sellers may pass them off as genuine archaeological finds and increase prices several times. Copyright www.orangesmile.com
6. There are relatively few large shopping centers and shops in the city, so one needs to prepare enough cash for shopping. Cashless payments are only allowed in large shopping centers.
7. Since food at local restaurants is prepared mainly from regional products, most of them are attractively priced. In summer, it would be a great idea to explore local grocery markets where they sell cheap fresh fruits and popular delicacies.
Excursion over cultural sights of Merida - 'must visit' points of interest
Historical monuments of various periods have been preserved in Merida. An outstanding religious site is Basílica de Santa Eulali. It is one of the region's oldest churches, the first …

Open
8. Most of the popular hotels are located in the historic district. It is convenient to stay at such hotels, but it is often too crowded and noisy outside.
9. Thrifty tourists should pay attention to hotels located near the railway station, which are much more affordable. From here, they can get to the historic district on foot in 15-20 minutes.
10. Most interesting holidays in Merida take place in summer and the first autumn month. During this period, tourists can enjoy the highest concentration of entertainment and free tours.
11. Connoisseurs of fine wines will be interested in visiting local shops and cellars. In the vicinity of the city, they produce special white, pink, and red wines, including the most popular Tempranillo, Garnacha, and Graciano.
12. Significant Merida attractions can be explored in a few days. If the tours within the city are not enough, you can go explore the surroundings rich in historical and natural sites.
13. Those going on a trip by car should consider that local drivers do not care much about traffic rules. Even when there are special signs and traffic lights, they may commit gross violations.
14. There are very few nightclubs and bars in the city, most of them are located in large hotels. An alternative to them is some restaurants that welcome visitors until late at night.
15. Not far from Merida is the old town of Trujillanos famous for its historical monuments and craft workshops. Here you can find the most unusual souvenirs during a tour.

Preparing your trip to Merida: advices & hints - things to do and to obey You can re-publish this content with mandatory attribution: direct and active hyperlink to www.orangesmile.com.
Merida - guide chapters 1 2 3 4 5 6 7

What to visit being in Merida - unique sights 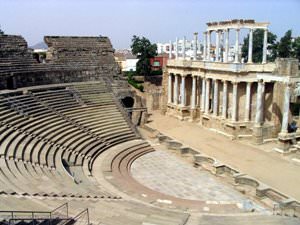 Distance from Merida center - 0.5 km.
According to rough estimates, initially the amphitheater of Merida could accommodate about 15000 spectators. For many years, the upper stages of the theater have been almost completely disassembled. Local residents used stones for the construction of houses. Today it can accommodate about 6000 spectators. In recent years, the unique landmark has undergone several large-scale reconstructions. Now it is a permanent venue for a number of cultural events, including the Festival of Classical Theater. … Read further

Tips for the cities around Merida

Sevilla
4. Don’t forget to try wine drink Sangria Siesta that is very popular among local residents and tourists. You will be offered to try it in any restaurant or a bar. 5. Tickets to cultural and recreational activities should be bought only in special kiosks or directly on the stadiums and museums. You shouldn’t buy tickets from unknown people on streets under no ... Open »
Cordoba
4. Smoking in public places is prohibited, so be very careful about special signs. Next to each restaurant, public institution and shopping complex there are special areas for smokers. 5. Travelers need to remain vigilant in public places and to keep an eye on their personal belongings. In shopping centers, public transport and markets it’s easy to become a victim of ... Open »
Andalusia
4. Along historic districts you have to travel on foot or by bicycle that also remains a common mode of transport. Ancient streets are very narrow, so it would be quite problematic to go there by car. 5. Tourists who expect to explore the area by car have to consider that local drivers don’t differ with exemplary compliance with traffic regulations. Leaving the car at the ... Open »
Isla Canela
4. Tourists who plan to visit other cities, for example, Seville are recommended using railways. Local trains are comfortable and have a flexible schedule convenient for both locals and tourists. Fast trains are marked as AVE, and trains connecting small towns are marked as RENFE. 5. When using taxi services, make sure that the driver has the meter turned on. It is ... Open »
Toledo
4. Travelers who intend to have a shopping trip are recommended to clarify conditions of getting tax free checks. Experienced travelers recommend using global refund system to get cash in the airport. 5. The most common souvenirs among tourists remain blades and swords of local production. Shoppers have to pay attention to pottery too. It is of the highest quality and is ... Open »
Leiria
4. Fans of outdoor recreation should remember that it is forbidden to make a fire in local parks and natural areas. Making bonfires is only allowed in places with specially equipped sites. 5. As the city began attracting tourists relatively recently, hotels and restaurants still keep prices at a reasonable level. Those who want to save even more should look for hotels and ... Open »

Travelling to Merida - advices and tips. What should be provisioned in advance, the rules you might want to follow, and the things you better avoid doing in Merida. We help you to make your trip smooth and easy, with no unexpected surprises.