Cuisine of Merida for gourmets. Places for dinner - best restaurants 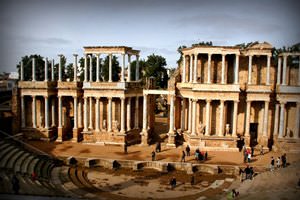 Merida is ready to delight gourmets with a variety of interesting dishes and drinks. Since the city can hardly be called touristy, most of its restaurants is aimed at locals and serve typical regional food. The menu necessarily contains a variety of pork dishes. Pork is cooked over an open fire, added to soups and goulashes, used to prepare delicious ham and various types of sausages. Seasonal vegetables are given great attention too. Salads and roasts, as well as interesting first courses are prepared from them.
Guide to Merida sightseeing - things to see and to visit
The first settlement on the territory of the modern city was founded in 25 BC and was used as a place of life for fired Roman soldiers. In those days the city was called Emerita Augusta in …

Open
An interesting feature of regional cuisine is the variety of cold vegetable soups. The most common dish in this category is Salmorejo tomato soup, which is necessarily cooked with garlic. The formation of regional gastronomy was greatly influenced by nearby Portugal. A typical heritage of Portuguese cuisine is "bacalao dorado". This is the name of chicken-fried cod fillet that is served with crispy fried potatoes.
Classic Spanish dishes are also quite widespread in Merida's restaurants, and croquettes are considered the most popular snack here. These deep-fried small balls can be prepared from various types of minced meat and seafood. Such a simple dish is always served with interesting sauces and vegetable garnishes. Many chefs in Merida prefer croquettes with the addition of jamon. Regional cuisine will surely appeal to fans of seafood. They will have a chance to try sumptuous dishes from octopus and shellfish, enjoy rare species of fish and shrimp. Copyright www.orangesmile.com
Family holidays with kids in Merida. How to entertain your child, things to show to children.
Merida is a city whose first mention dates back to ancient times, which is reflected in numerous city attractions (for example, the Roman Amphitheater, aqueducts, thermae, the Temple of …

Open
Merida is considered the birthplace of the famous "Cocido madrileño", which is now widespread in many regions of Spain. This is how they call a thick stew prepared from various types of meat with the addition of chickpeas and smoked meats. The hearty hot stew is especially popular among locals in the cold season. Every local chef has their own secrets for cooking the popular dish. When it comes to sweets, it is worth paying special attention to desserts made from fresh fruits and berries. They are used to prepare wonderful ice cream, added to pastries and even cold soups. 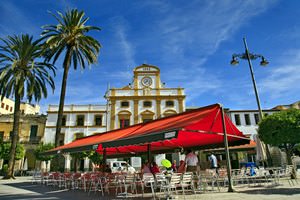 A popular gourmet spot is La Tahona Bar that offers a casual atmosphere and an impressive menu. Here you can try not only signature cocktails and the best Spanish wines but also fine dishes of fresh seafood. Here they serve amazing stuffed squid with asparagus, seafood platters, as well as hearty meat dishes. The menu includes both Spanish and classic European dishes.
Authentic traditions, festivals and lifestyle of Merida inhabitants
Merida is a unique city from historical and cultural points of view. In Roman times, one of the largest and richest cities was located on its territory, and some of its monuments have been …

Open
La Milanesa Restaurant is a great place for a family holiday, as it serves simple and very popular home-style food. You can always order fried potatoes with jamon and fried eggs, fresh vegetable salads, traditional soups, and fragrant homemade cakes. Despite their simplicity, all the dishes are presented in a very beautiful way. Guests are offered to complement the meals with Spanish wines brought from different regions of the country. 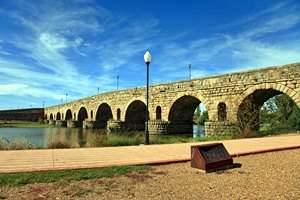 Fans of hearty meat dishes will like Al Plato where they serve fantastic dishes from selected pork. Meat, as well as vegetables and fruits, are supplied to the restaurant from the surrounding farms. Fresh produce is one of the main secrets of the unsurpassed taste. The house specialty is grilled pork served with various vegetable garnishes. There are also suitable dishes for vegetarians - the restaurant prepares excellent salads from seasonal vegetables, as well as traditional Spanish dishes from beans, lentils, and chickpeas.
Excursion over cultural sights of Merida - 'must visit' points of interest
Historical monuments of various periods have been preserved in Merida. An outstanding religious site is Basílica de Santa Eulali. It is one of the region's oldest churches, the first …

Open
Fans of a non-standard setting will love A de Arco located in the basement of one of Merida's historic buildings. It was possible to preserve part of the old stone walls. This restaurant is perfect for a romantic dinner. It specializes in Spanish, Mediterranean and European cuisines, so everyone can choose something to their liking here. Among other advantages of the restaurant is an extensive wine list. 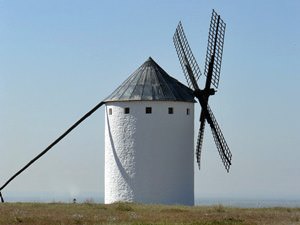 The best barbecue in town can be tried at La Carbonería, which offers its guests a large selection of meat and poultry dishes cooked over an open fire. They can also enjoy grilled vegetables, as well as fine cold cuts with various kinds of sausages and jamon. The restaurant features an original design and a hall finished in wood.

This guide to cuisine and restauraunt in Merida is protected by the copyright law. You can re-publish this content with mandatory attribution: direct and active hyperlink to www.orangesmile.com.
Merida - guide chapters 1 2 3 4 5 6 7

♥   Restaurant 'Gonzalo Valverde' Mérida. Type - Creative. 1.8 km from the center. On the map

Searching where to eat - restaurants and cafe on Merida map

Cuisine and restaurants in the neighbours of Merida

Sevilla
Enrique Becerra is a cozy restaurant and the oldest dining facility of Seville. During its long history the restaurant has greeted many famous guests. Here loved dining the president Jose Maria Ansar and the famous opera singer Placido Domingo. The main pride of the restaurant is an amazing collection of wines - the cellar of the restaurant keeps around 18 thousand bottles of ... Open »
Cordoba
Very popular is the La Tranquera restaurant serving Argentinean cuisine, which resembles a stylish bar with its design. Visitors can stay in the cozy lounge or at the bar. The choice of drinks in the restaurant is huge, as well as the number of branded treats. The San Cristobal restaurant is suitable for families, as they provide visitors with children with a separate menu. It ... Open »
Andalusia
Fans of fish treats are sure to visit coastal areas of Andalusia; the selection of fish restaurants here is just enormous. A typical local treat is fish baked in salt; this method of cooking was invented many years ago. The fish is placed on a thick layer of salt and then it is covered by remaining salt and hot coals; fish is prepared only on an open fire. In some restaurants, ... Open »
Isla Canela
Such restaurants as La Rana and Los Barriles are perfectly suitable for everyone who wants to try local cuisine dishes. Seafood dishes have a special place in the menus and hearts of local people. The region is famous for its fine seafood and there is nothing strange in that, taking into consideration that Isla Canela is located close to the Atlantic Ocean. Needless to say, ... Open »
Toledo
The most popular Spanish dishes are served in the Fabula restaurant. Fans of meat treats are sure to enjoy roast pork and seafood fans will be able to order the tuna with spicy sauce. Crisps and sweets are especially popular among young guests of the restaurant. The La Ermita restaurant invites visitors to enjoy the best Spanish wines in a relaxed atmosphere. The basis of the ... Open »
Leiria
Local farms produce not only high-quality meat but also excellent dairy products. Here you can try dozens of cheeses from goat and cow milk, the richest selection of cheese is presented in local food markets. In addition to restaurants, the city has wonderful cafes and bakeries where you can try the best desserts. They also serve various types of biscuits, and "pão-de-ló" ... Open »

Travel notes on best cuisine and restaurants of Merida (Spain) on OrangeSmile.com. Famous recipes and traditional dishes and courses in Merida restaurants. Where to eat - our recommendations on popular places in Merida, where you can taste delicious meal and also spend a good time with your friends.