Detailed hi-res maps of Menorca for download or print 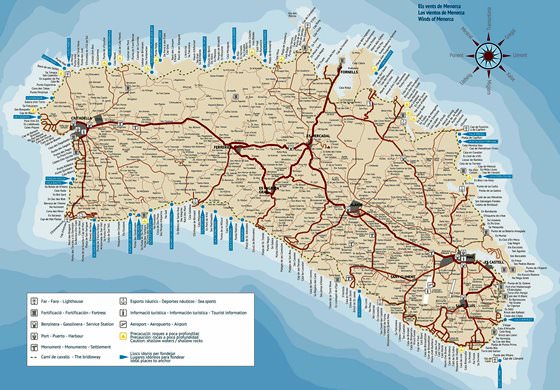 The actual dimensions of the Menorca map are 4921 X 3424 pixels, file size (in bytes) - 2529411. You can open this downloadable and printable map of Menorca by clicking on the map itself or via this link: Open the map. 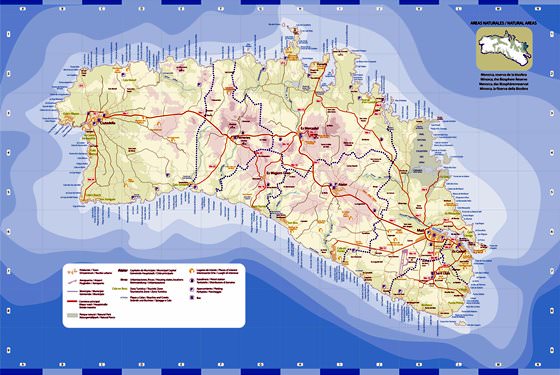 Search for services, infrastructure and sights on map of Menorca

Our guide chapters over Menorca

Arenal de s’Olla has a number of awards. It is an excellent place for holidays with children. The beach central area is about 300 meters long; it’s absolutely free and open to public access. There's a small apartment hotel at one end of the beach and a nice restaurant at the other. Nature lovers have to pay attention to Binimellà beach. It is one of the calmest beaches on the island surrounded with … Open

2. The tourist season lasts from the beginning of April till the end of October. The rainiest month of the year is August. Travelers planning rich sightseeing tour are not recommended to visit the island in December as this period features high winds and frequent heavy rains being rather unfavorable for touring. 3. During trips through the island one should attentively listen to the guide as … Open

If the above-mentioned doesn’t seem to be enough, it is recommended to check out Aquarock in Cala'n Bosch. It is more suitable for children who will surely appreciate slides and pools for every taste and age. Insotel Punta Prima Resort & Spa, among other things, offers a great water park - Barcelo Pueblo. It is another great place perfect for little tourists, all thanks to its lovely pools, slides, and … Open

Festivals and events in Menorca

At the end of the same month, one can witness an event called Festival de Sant Jaume, which takes place in Castell resort. The festival is ideal for tourists traveling with kids who will be pleased with live musical performances, fireworks, parades, and, of course, horse races - no festival on the island can do without them. All large-scale actions take place on the central streets of the resort town and its … Open

The island has many art galleries, which travelers also often visit in search of unusual memorable gifts. One of the most attractive ones is VidrArt Gallery. Here you can find wonderful seascape paintings, from tiny to huge works. The price range is quite extensive in the gallery, so even for a moderate price, you have a chance to buy some very beautiful works of art. A must-have for ladies is Roisso … Open

The island has exceptional facilities for active recreation. It would be interesting for nature enthusiasts to visit national parks and reserves. One of the most interesting to visit with children is S’Albufera des Grau Natural Park. This reserve is very large with an area of more than 5 000 hectares. Many interesting hiking routes are laid along the park’s region. While going along these routes, … Open