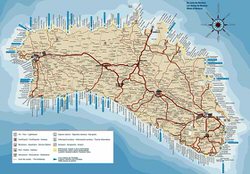 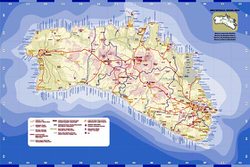 Interactive maps of hiking and biking routes around Menorca

1. You can zoom in/out using your mouse wheel, as well as move the map of Menorca with your mouse.
2. This interactive map presents two modes: 'Biking Routes' and 'Hiking Routes'. Use the '+' button on the map to switch between them.

This Menorca map has two modes: 'Railway Network' and 'Landscape & Rural Map'. Use the '+' button on the map to navigate.

Our guide to Menorca

The location of a monument of a later period is the Santa Agueda Playa. The area keeps an ancient castle of Santa Agueda. This majestic fortress has perfectly survived through the long course of history and appears to visitors in all its glory. The fine chapel of St. Anna is located not far from the fortress. The Roman road start is set close to the chapel. The age of the road is over two thousand years and walking … Open

Sol Gavilanes resort hotel is situated at the scenic Cala Galdana beach. Located only few minutes away from the coast, it offers its guests excellent view from panoramic terraces set up on the hotel's roof. Rooms and public areas of Sol Gavinales are decorated in modern style and enhanced with artistic illumination. The hotel also offers a number of additional services, including an excellent kid club with skilled … Open

More private and secluded beaches are located in the north part of the island as the sea is rather peaceful there. This is the main feature that makes the area perfect even for comfortable recreation with kids. The private seekers will love the Santa Galdana Bay. Any moment the travelers may leave the beach and set off to exploration of the local natural attractions. The village of Fornells will be of great … Open

Prudent tourists are highly recommended to visit the Cafe del Nord restaurant as it serves excellent treats of Spanish cuisine at most tempting and attractive pricing. The main feature of the eating house is a truly huge serving size that is why ordering of one dish for two is quiet reasonable. An elegant and fine eating destination named The Anchor specializes in European cuisine. The restaurant will also please … Open

The most interesting holiday is considered to be the Festes de San Joan traditionally held in June. For the whole week local folks honor San Joan. The fest is rich in different events. The holiday is added with festive treats. During a walk one may find numerous concession stalls offering sweets and refreshing drinks the most popular of which is gin of local production called “ginebra”. The end of the August … Open

An excursion to Fort Marlborough, promises to be exciting. It was built in the 18th century and is located in the picturesque bay of St. Stephen. This fort was built specifically to protect the port Mahon. Several years ago, an interesting historical museum was opened in the fort. Its collection of exhibits is dedicated to colonial times. Travelers who like to explore nature attractions should go to the resort … Open