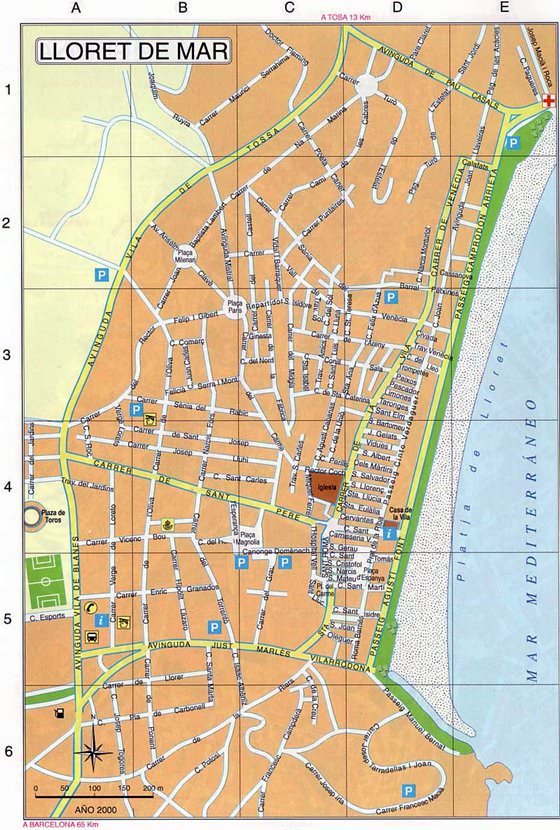 Search for services, infrastructure and sights on map of Lloret de Mar

Magic Park is another excellent entertainment facility, especially for those wishing to play bowling, board games, have a great time dancing in the evening, have a bite to eat at a bar or try out some rides. By the way, here you can find one more casino, and gamblers will be incredibly happy about it. Want to focus specifically on bowling? For this, tourists and locals choose such an entertainment center as Bowling … Open

5. All the beaches of the resort are public and free for visitors. Additional charge may be applied for sport or beach equipment rent. 6. The resort has adopted a system of tips. Cash reward should be given for every service you get. The tips should be given to waiters in the restaurants and cafes, to maids in the hotels and to guides and taxi drivers. A reward equaling to 5-10% of the total sum … Open

In search of original souvenirs, tourists often go to the local Flea Market operating several times a month. Here they sell interesting antiques, handicrafts, and popular souvenirs, which are quite affordable here. Popular tourist souvenirs include old books, often valuable collectible copies. Lloret de Mar boasts several excellent markets visiting which gives a lot of impressions. One of the largest is the … Open

Lloret de Mar for children - what to visit

There is a lot of interesting entertainment for tourists with children in the popular Spanish resort. Fans of water attractions will like the first-class water park “Water World”. This water park is outdoors and has some amazing pools on its territory, one of which is styled as an artificial beach with waves. The choice of slides here is also stunning. You can find quite extreme ones and some suitable for the … Open

For lovers of walks in beautiful natural places, it is worth taking a stroll in the Santa Clotilde Garden. It is located in the prestigious ​​Fenals district, close to the beach with the same name. It is difficult to find a garden equal to it in beauty. It is decorated with many spectacular landscapes, huge flower gardens and majestic trees. Among this natural splendor are beautiful fountains and sculptures. … Open

One of the main celebrations in the city’s calendar is the Fiesta Patronal dedicated to the patron saint Santa Cristina. The three-day event is usually held in late July. Solemn processions take place in a chapel named after the saint, and the main entertainment action is arranged in the central square. It is here that dancers perform the traditional dance “les almorratxes”, which has become an integral … Open