Detailed hi-res maps of Paguera for download or print 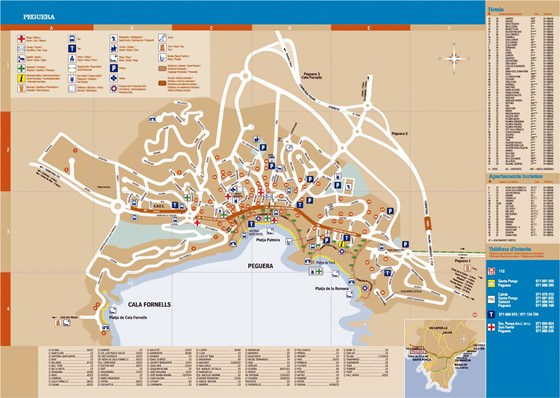 The actual dimensions of the Paguera map are 1679 X 1194 pixels, file size (in bytes) - 334329. You can open this downloadable and printable map of Paguera by clicking on the map itself or via this link: Open the map.

City tours, excursions and tickets in Paguera and surroundings

Search for services, infrastructure and sights on map of Paguera

Our guide chapters over Paguera

An outstanding historic landmark of national importance is Bellver Castle located in the immediate vicinity of the resort. It is the only round castle in Spain. The fortress built in the 14th century was inspired by the ancient Jewish Herodium. The historical castle stands on a hill, whose height is 140 meters, so it is perfectly visible from many parts of the island. For many years the fortress has been used for … Open

The resort will be certainly loved by people who enjoy beach rest. Paguera is also well-equipped for various sports activities. The most popular beaches are Playa Tora, Playa Palmira and Playa La Romana. They are located very close to each other, so tourists can reach them on foot. During your walk to a beach you will find many restaurants of different types. Here are located authentic English pubs, restaurants with … Open

Maps of Palma de Mallorca
Another interesting event is the Sant Antoni Abat festival which is held in the second part of January. As it comes clear from the name of the holiday the festival is devoted to Sant Antoni being the farmers and croppers patron. The main event of the festival is domestic animals and cattle parade in which farmers take part as well. Barbeque fans will love another ethnic fest ... Open »
Maps of Mallorca
At the beginning of May, the colourful festival Moros i Cristians is held in Soller, including battles between people dressed as Moors and Christians. The event pays tribute to Spanish history — as it is known, equally influenced by the culture of Spain as Arabs and Christians. In addition to theatrical performances, the audience will enjoy fireworks, costume parades, as ... Open »
Maps of Ibiza
The festival year ends with Party Hard Closing Festival Ibiza. This popular event starts in the middle of September. This is the time when the event’s visitors, both locals and tourists, have fun and party hard as if it is the last festival in their life. According to locals, this is the only right way to have fun. Among headliners of this festival, there are always many ... Open »
Maps of Menorca
At the end of the same month, one can witness an event called Festival de Sant Jaume, which takes place in Castell resort. The festival is ideal for tourists traveling with kids who will be pleased with live musical performances, fireworks, parades, and, of course, horse races - no festival on the island can do without them. All large-scale actions take place on the central ... Open »
Maps of Salou
The main summer event in Salou is considered to be the Golden Nights’ Summer Fiesta which is annually visited by more than 300 thousands of foreign guests. Queen of the festival contest, bright music shows and great pyrotechnic production, street performances and fairs are the main events of the entertainment program of the grand summer fest. Many country fests are devoted to ... Open »
OrangeSmile.com - online travel reservation expert providing reliable car rental and hotel booking services. We feature more than 25.000 destinations with 12.000 rental offices and 200.000 hotels worldwide.
Secure Server