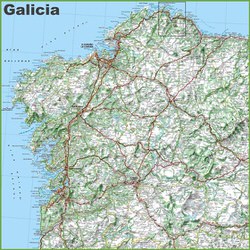 Interactive maps of hiking and biking routes around Galicia

1. You can zoom in/out using your mouse wheel, as well as move the map of Galicia with your mouse.
2. This interactive map presents two modes: 'Biking Routes' and 'Hiking Routes'. Use the '+' button on the map to switch between them.

This Galicia map has two modes: 'Railway Network' and 'Landscape & Rural Map'. Use the '+' button on the map to navigate.

Our guide to Galicia

Galicia is famous for its beautiful beaches, magnificent forests and historical monuments, which are known far beyond the borders of Spain. Both fans of ecotourism and those interested in culture could find entertainment there. Oddly enough, most foreigners prefer so-called rural tourism. Travelers like to settle in small family hotels away from civilization and enjoy the splendor of nature. Most of the cozy hotels … Open

Santiago de Compostela is the capital of the region. The Cathedral with relics of St. James the Greater is its main landmark. This unique religious monument attracting thousands of pilgrims to the city is interesting from an architectural point of view. In addition to this religious monument, the city has a very interesting ancient university, the scenic Gelmirez Palace and the Collegiate Church of Santa Maria del … Open

Every region of Galicia has its own historical landmarks. Some of them are well-known far out of the country. San Francisco Monumento hotel is one of the symbols of Santiago de Compostela. It occupies the picturesque old monastery building. Original decorations, including strait stone walls and arches, were partially preserved during reconstruction. Nowadays it's complemented with modern accessories. The hotel's … Open

Those who want to spend time away from busy and crowded resorts are advised to have a rest in Ortigueira village situated in a bay of the same name. This is a very beautiful and peaceful place to stay; in addition to picturesque wild beaches, the village features many interesting places to walk. Northern region of Galicia, Rias Altas, would appeal to fans of natural attractions, as travelers can stroll through its … Open

Persebes is considered to be one of the most expensive local delicacies; those are sea truffles that are very dangerous to harvest. These sea delicacies grow on coastal rocks of uninhabited islands; they become a harvest of the most experienced fishermen only. The favorite delicacy of locals are sardines; natives even dedicated an amazing festival to this common food. Method of cooking sardines is very simple; … Open

The festival is held in October; it is visited by famous chefs and culinary critics from different countries, as well as ordinary travelers wishing to taste popular national delicacies. Large white tents are set on the coast; fresh seafood is delivered there. A huge number of diverse oysters, squid, scallops, shrimp and fish is simply amazing; you can buy the most rare and exquisite seafood at those tents. Chefs … Open