Preparing your trip to Corse: advices & hints - things to do and to obey 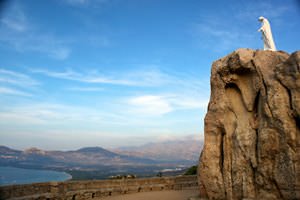 1. Divers should remember that in any case it isn’t possible to damage the coral while diving; severe penalties and fines are collected for such violations. You shouldn’t buy any crafts from coral from local merchants on beaches. Selling them as well as buying is considered a serious crime.
2. Going for a walk through the nature reserve, it’s worth to take sunscreen and insect repellent with you. You can get burnt not only while relaxing on the beach, but also while walking around the city; annoying insects can ruin even the most interesting tour.
3. For souvenirs it’s better to go to the small street markets that exist in all towns. Lots of interesting trade stands and souvenir shops are located close to major beaches; prices there are much more attractive than in large shopping centers.
4. You have to have a sufficient amount of cash, when going to the market, so it’s better to stock up notes of small face value. It is necessary to bargain in markets and private retail stores, as it certainly will reduce the price of an item and would be taken as an honor to local traditions. In large shopping centers, restaurants and petrol stations credit cards of all known international standards are accepted.
5. One of the main values for locals is their native language. They don’t take foreign languages seriously. Even if they are fluent in other languages, locals speak them as rare as hen’s teeth. Vacationers are advised to bring along the dictionary and learn several phrases in the local language. Copyright www.orangesmile.com
6. Car rentals are available in all major cities; daily rental price for an economy class car is about 70 US dollars. Drivers should carefully observe traffic rules, violation of which would also carry substantial fines. It is prohibited to carry children under 12 years old on the front seat of the car.
7. In restaurants and cafes it is customary to leave a tip, which is 5 - 10% of the total order. In luxurious hotels the service charge may be included in the bill; in this case there would be a ‘service compis’ mark. It is also appropriate to leave a tip for taxi drivers and maids in a hotel.
Authentic traditions, festivals and lifestyle of Corse inhabitants
To get acquainted with the culture and traditions of local people you have to visit one of their national holidays. Every year in Corsica interesting festivals and religious celebrations, …

Open
8. It’s better to pay for goods and services only with local currency; any other is accepted with great reluctance and at unfavorable exchange rate. The most profitable exchange rates are offered by local banks; exchange offices have less favorable rates.

Preparing your trip to Corse: advices & hints - things to do and to obey You can re-publish this content with mandatory attribution: direct and active hyperlink to www.orangesmile.com.
Corse - guide chapters 1 2 3 4 5 6 7 8 9 10 11

1. Paris is the main tourist city in the world, however it is rather small. You can walk through it on foot, even if you are located in one of the remote quarters. Walking around Paris will be a fascinating excursion and will allow you to best feel the true spirit of France.
2. In large cities and especially Paris, one should beware of neighborhoods and areas where immigrants live. Because of the high unemployment rate, some of them lead a criminal way of life. At night, robberies are common in such areas.
3. When visiting popular tourist places as the Louvre, the Champs Elysees, the Eiffel Tower, the Latin Quarter, it is worth being extremely attentive. In such places, the concentration of pickpockets is the highest.
4. Most museums offer flexible prices. On some days they work for free. … Open

Tips for the cities around Corse

Ajaccio
2. The most interesting and exciting time to visit the city is during the national holidays and festivals. The time of their conduction many very slightly each year, so travellers are recommended to specify the time of the local celebrations in advance. 3. Visitors are recommended to leave small monetary rewards to waiters in the local restaurants and cafes, regardless ... Open »
Livorno
2. Livorno is a large port city, so besides plane and train, you can also get here by ship. There is no airport near the city, the nearest ones are located in the vicinity of Florence and Pisa. 3. Active tourists should consider renting a private car. On the outskirts of the city, there are many interesting sights, which are not always easy to reach by public transport. ... Open »
Pisa
2. Pisa is excellently networked with neighboring cities of Florence, Lucca and Livorno. Tourists will easily manage to get even to Rome. A cost of a trip is rather affordable. It varies from 2 to 5 Euro depending on the length of a trip. Another way to reach neighboring cities is by bus. 3. The hottest months of the year are considered to be July and August as in this period ... Open »
San Remo
2. The resort area is rather small thus the best way to cruise its territory is on foot. The main type of city transport in San Remo is a bus. The busses are cruising the city from early morning till late night. A bus station is located right in the center of the city. The station provides information on current routes and on cost of trips. 3. A popular type of transport among ... Open »
Viareggio
2. The majority of stores open early, at 7 - 8:00 am, and serve visitors to 15:00 - 16:00 pm. Large shopping centers may work until 20:00. Shops may close for a short lunch in the afternoon. 3. All government agencies and shops are closed during holidays, so travelers who plan to devote a lot of time to shopping are recommended to not to arrive in the city during the ... Open »
Lucca
2. The main city transport means is a bus. However the tourists are recommended to explore the small town on foot. Major landmarks and monuments of Lucca are set in close vicinity to each other; that is why a walk will turn rich in emotions. 3. Only those tourists are permitted to drive in the Lucca city who stop in the hotels of the city. Setting off for a tour one should ... Open »

Travelling to Corse - advices and tips. What should be provisioned in advance, the rules you might want to follow, and the things you better avoid doing in Corse. We help you to make your trip smooth and easy, with no unexpected surprises.