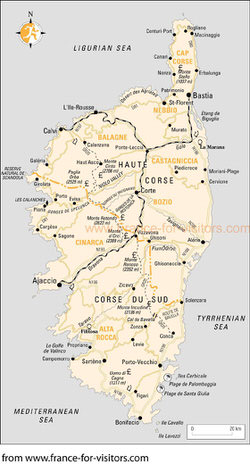 Interactive maps of hiking and biking routes around Corse

1. You can zoom in/out using your mouse wheel, as well as move the map of Corse with your mouse.
2. This interactive map presents two modes: 'Biking Routes' and 'Hiking Routes'. Use the '+' button on the map to switch between them.

This Corse map has two modes: 'Railway Network' and 'Landscape & Rural Map'. Use the '+' button on the map to navigate.

Our guide to Corse

While in Ajaccio, all women are invited to Chrysolithe. This store specializes in designer's jewelry. In addition to traditional products made from precious metals, you can also buy quite unusual ones here. For example, chic wooden earrings and necklaces are available to customers, as well as coral and marble jewelry. There are several great shopping streets in Ajaccio where Cours Napoleon is considered the … Open

Santa Giulia beach is among the most beautiful beaches of the island. It’s situated in the scenic bay of the same name and is covered with snow-white sand. During the day, crystal-clear water at Santa Giulia changes its color from light azure to rich turquoise. That's a really beautiful and appealing area. Modern equipment, beach chairs with sunshades, restaurants and water sports centers make Santa Guiulia … Open

7. In restaurants and cafes it is customary to leave a tip, which is 5 - 10% of the total order. In luxurious hotels the service charge may be included in the bill; in this case there would be a ‘service compis’ mark. It is also appropriate to leave a tip for taxi drivers and maids in a hotel. 8. It’s better to pay for goods and services only with local currency; any other is accepted … Open

The island has many excellent equestrian centers where tourists can try horseback riding through the picturesque areas of Corsica. Thus, Ranch Jose is available in Solaro, Fior di Lezza in Serra di Ferro, and Country Horse in Sainte Lucie De Porto Vecchio (near Lecci). This kind of leisure will be of interest to both solo tourists and those traveling along with friends or family. In Corsica, no less popular are … Open

Festivals and events in Corse

The Festa Antica annually celebrated in Aleria (which is on the east coast) falls in mid-August as well. This is a real opportunity to feel the atmosphere of the Ancient World. People dressed in togas walk along the central streets of the city, sounds associated with ancient times are heard everywhere. The festival is joined by restaurants and cafes where at that time guests can taste exclusively Roman dishes. … Open

Rico et les Pirates is located in the same city. The smallest kids will enjoy this entertainment center more than others. Children can try out various structures and slides - and all this is themed in a pirate manner (which, as is known, all kids really like). Also, the smallest kids will definitely enjoy traveling on a small train (Le Petit Train), this can be done in the city of Corte (in the center of the … Open