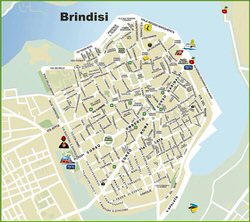 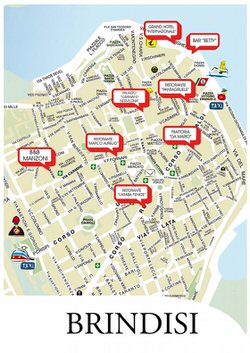 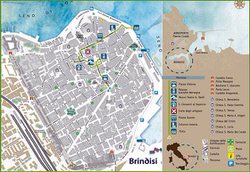 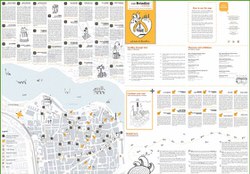 Interactive maps of hiking and biking routes around Brindisi

1. You can zoom in/out using your mouse wheel, as well as move the map of Brindisi with your mouse.
2. This interactive map presents two modes: 'Biking Routes' and 'Hiking Routes'. Use the '+' button on the map to switch between them.

This Brindisi map has two modes: 'Railway Network' and 'Landscape & Rural Map'. Use the '+' button on the map to navigate.

City tours, excursions and tickets in Brindisi and surroundings

Our guide to Brindisi

Brindisi has always been an important city due to its strategic location and a naturally formed port. In ancient times, the city was a major player in trade between Southern Italy, Greece, and other nations of the Adriatic Sea. This fact has enabled early development of the city and that is one of the reasons why tourists can see so many ancient landmarks and beautiful historical buildings. However, sightseeing is … Open

Traditions and mentality of Brindisi

Every year, Brindisi hosts interesting national celebrations and events that never cease to attract many curious travelers. Processione del Cavallo Parato remains one of the most famous and popular national celebrations. The name can be translated as “a procession of the decorated horse”. The holiday takes place 60 days after Easter. The Cathedral Square is traditionally the main destination of all solemn … Open

The Medieval strongholds remain the most popular sights in Brindisi. As early as in the 15th century an impregnable wall was built for the defense of the city. Later the defensive line was reinforced during the reign of Charles V. Apart from the defensive walls there are also a few bastions in the historic district. San Giacomo bastion is considered to be the most interesting among them. It was recently fully … Open

Stylish and modern Hotel Orientale is within walking distance of the railway station. Its trendy rooms are equipped with elegant natural wood furniture and decorated with light fabrics, some of them have panoramic windows covered with beautiful translucent curtains. On the ground floor, you can book very beautiful rooms with a sliding panoramic window, behind which is a secluded country-style terrace with living … Open

In a search of non-standard gifts it's possible to come by Mediterraneo Casa specialized store. It is a handicraft workshop with a large trading pavilion, where you can buy wonderful ceramics. The main part of the items presented here has a practical purpose, but in the variety of products you can pick up just interesting decorative ornaments. Ladies will surely be delighted with the Erboristeria Hamamelis store, … Open