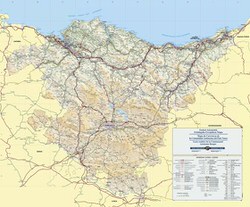 Interactive maps of hiking and biking routes around Basque Country

1. You can zoom in/out using your mouse wheel, as well as move the map of Basque Country with your mouse.
2. This interactive map presents two modes: 'Biking Routes' and 'Hiking Routes'. Use the '+' button on the map to switch between them.

This Basque Country map has two modes: 'Railway Network' and 'Landscape & Rural Map'. Use the '+' button on the map to navigate.

Our guide to Basque Country

Travelers who prefer staying in unusual places should pay attention to the Ibaia hotel located in the picturesque town of Gordexola. It occupies one of the buildings of Santa Isabel Monastery. Guests would find it comfortable to stay in beautiful rooms decorated with natural stone and wood. It’s worth noting that all the rooms can boast excellent technical equipment, so even the most demanding guests will fill … Open

Do you prefer to explore the world from the ground? Then fourteen most beautiful Natural Parks are at your disposal. Each of them has several foot routes for different levels of sports state. For instance, on the top of Gorbea mountain, which is located on the territory of the same name reserve, you will see a picturesque view. In Armanon you will find a famous Posalagua cave, which contains a great number of … Open

A visit to a sidreria, on the other hand, will cost you much less. A sidreria is a traditional Basque restaurant, where the menu is based on the courses, served with cider. Under any circumstances, do not miss the opportunity to try an omelet with codfish, a beef chop, and Idiazabal cheese, which is served as a dessert with nuts and quince jam. The Basque Country is famous for its grilled dishes. When in Getaria, … Open

Traditions and mentality of Basque Country

A lot of tourists are concerned about the Basques’ ethnic integrity and gaps in relationships with the Spanish, relating to this. In reality, there is no aggressive confrontation here. A part of the local population even considers themselves Spanish. Everybody knows ETA, the Basque extremist group, which fought for ethnic independence, and is now dissolved. The attitude to it is mixed. If you don’t … Open

Fans of event tourism will find it interesting to visit Gipuzkoa Province. Interesting national celebrations and unusual contests take place virtually every month there. The province is home to many talented musicians and dancers. Dancing classes by local residents are always very popular with tourists who visit this part of the country. The town of Tolosa is an absolutely gorgeous place that has not … Open

Basque Country for children - what to visit

If you are going to San-Sebastian, then certainly go to the amusement park, after you’ve been to the oceanarium. The park is located on Igueldo Mountain. It does not only have a variety of entertainments from Chamber of Horrors to Swiss rollercoaster, but also an amazing view. By the way, here you will be able to touch the history – an ancient cable railway and other rides are intact since the park was … Open