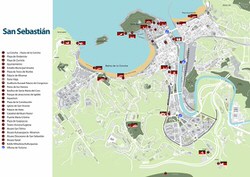 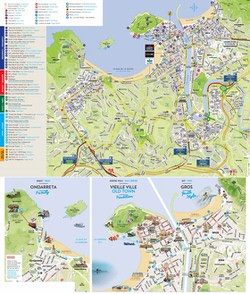 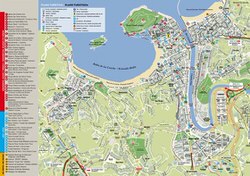 Interactive maps of hiking and biking routes around San Sebastian

1. You can zoom in/out using your mouse wheel, as well as move the map of San Sebastian with your mouse.
2. This interactive map presents two modes: 'Biking Routes' and 'Hiking Routes'. Use the '+' button on the map to switch between them.

This San Sebastian map has two modes: 'Railway Network' and 'Landscape & Rural Map'. Use the '+' button on the map to navigate.

Our guide to San Sebastian

Traditions and mentality of San Sebastian

The resort city holds several remarkable cultural events of global significance during the year. The San Sebastian International Film Festival is one of such global events. The festival was first held in 1953 upon an initiative of local businessmen. The aim of the festival was to prolong a tourist season on the resort and thus to attract more tourists to the destination. The event was of great success and since that … Open

Not so long ago, the opening of the scientific Eureka museum took place in the city. It occupies a modern building in a futuristic manner. Here, visitors are told about the latest scientific achievements and developments. The museum's exposition includes many unique interactive exhibits. Due to the latter, it is possible to give tours, which are equally fascinating for both children and adults. A tour to the islet … Open

2. The resort of San Sebastian is interconnected with suburban cities with a developed railway network. Tourists can get to other cities by bus as well. One day tours to the cities of Madrid, Barcelona and Milan are of great popularity among foreign guests of the resort. 3. A heat of the tourist season on the resort falls within a period from the middle of May till the end of September. During this … Open

You can play paintball in the excellent Battlefield Live Inkomunikados club – and this can be done (quite necessary, as a matter of fact) in the company of friends or family members who are also part of the trip. The most popular place for gamblers is Casino Kursaal, where the choice of visitors is slot machines, blackjack, stud poker, roulette. In addition to the usual games, poker tournaments are often held … Open

Festivals and events in San Sebastian

The beginning of September is marked by a colorful event – Regatta La Concha. This spectacular rowing competition starts at the bay of the same name – this is where most of the visitors gather, some of whom have come especially to witness the spectacle of the regatta. Those who could not be present at the holiday, “stick” to their TV screens, as the colorful event is broadcasted on all TV channels. Many … Open

Sparing tourists will love to visit the La Fabrica restaurant being a perfect place for a family visit. A full course dinner in the restaurant will cost about 30 Euro. In addition to delicious meals its guests will have a chance to order a glass of fine Spanish wine. The Arzak restaurant specializing in Mediterranean cuisine is known far beyond the boundaries of the city. The restaurant has got three Michelin … Open