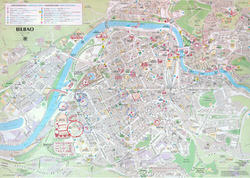 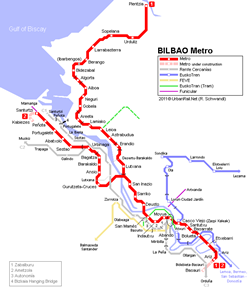 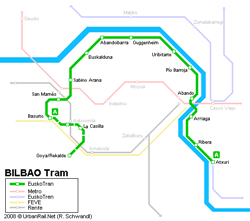 Interactive maps of hiking and biking routes around Bilbao

1. You can zoom in/out using your mouse wheel, as well as move the map of Bilbao with your mouse.
2. This interactive map presents two modes: 'Biking Routes' and 'Hiking Routes'. Use the '+' button on the map to switch between them.

This Bilbao map has two modes: 'Railway Network' and 'Landscape & Rural Map'. Use the '+' button on the map to navigate.

Our guide to Bilbao

The most famous monument of the city is located on its central square. The monument depicts Don Diego de Haro - the founder of Bilbao. According to historical data, the city on the bank of the Nervión River was founded in 1300. Starting from first days Bilbao has been distinguished by the atmosphere of cordiality and happiness. Even nowadays, seven centuries later, you can feel this atmosphere and unique spirit of … Open

Fans of nightlife and the tourists, who are indifferent to the works of Elvis Presley, should definitely visit Club Rock Star. The club often hosts performances of famous rock musicians, but the venue will be also attractive for fans of national cuisine – the local bar is famous for delicious snacks and excellent cocktails. Fans of contemporary music and dancing will surely like Cotton club, which entertains … Open

Beltz The Black should be definitely mentioned among the most prestigious restaurants of the city. The restaurant is easily distinguished not only by the rich choice of national dishes, but also by a stylish decoration of its hall. The restaurant’s interior is made in black and white, even the food here is served on black and white plates. In high floor vases you will are always find magnificent bouquets of … Open

The main feature of Hotel Caravan Cinema is its amazing interior. The situation of its rooms is really more like the scenery for a historical movie about traveling and adventures. Each and every element of the Interior is a priceless antique exhibit. Handmade wooden furniture, old radios and suitcases, yellowed newspaper clippings on the walls and metal chandeliers swaying under the ceiling - the hotel furnishing … Open

In accordance with an old tradition, one of the prominent inhabitants of the city should make a speech on the first day of the holiday. 10 years after the official proclamation of the holiday the so-called "town crier" received a special uniform. The suit hasn’t changed at all over the years and nowadays it consists of a bright yellow jacket, a tailcoat, a black cocked hat, a wide white belt and white … Open

In the city there are many beautiful palaces, one of the most beautiful is considered to be the Biscay Foral Delegation Palace. Built in the second half of the 19th century, it is a striking monument in the eclectic style. Over the years the palace managed to retain its original appearance and rich interior decoration. Open to tourists are almost all of its rooms, within its walls the palace houses collections of … Open