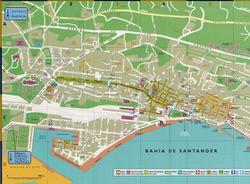 Interactive maps of hiking and biking routes around Santander

1. You can zoom in/out using your mouse wheel, as well as move the map of Santander with your mouse.
2. This interactive map presents two modes: 'Biking Routes' and 'Hiking Routes'. Use the '+' button on the map to switch between them.

This Santander map has two modes: 'Railway Network' and 'Landscape & Rural Map'. Use the '+' button on the map to navigate.

Our guide to Santander

As it comes clear of the restaurant’s name the eating house specializes in Indian cuisine treats. The restaurant is of great popularity not only among foreign guests of the tourist destination but among local folks as well. Exotic treats fans will love to visit the Casa Albo restaurant offering a vast assortment of inimitable signature dishes. Each dish served in this restaurant is a unique gastronomy fusion of … Open

Don't miss a chance to visit the town of Santillana del Mar in the outskirts of Santander, which is famous for its ancient architecture. Many miniature old houses survived in the city. Local residents decorate their facades with fresh flowers in a warm season. In the very heart of the city is situated an old lighthouse, built in this place in the middle of the 19th century. The height of the ancient lighthouse is … Open

3. The center of the city is convenient to be cruised on foot as a major part of cultural and entertainment establishments is concentrated in close vicinity to each other. Renting a car is a recommended service for those tourists planning to visit and explore the suburbs of the resort city or visiting the city with a large company of mates. 4. A major part of the historical and cultural objects are … Open

Santander is also interesting at night when it is filled with people who want to spend quality time after dusk. So if you want to dance, you should choose between the club Sala Niagara or Sala Kudeta, while for those who want to enjoy a glass of strong drink and see some theatrical or stand-up performances at the same time, they are welcome to the Sala Rocambole bar. Fine cocktail connoisseurs will be well received … Open

Festivals and events in Santander

At the same time, that is, you can witness another remarkable event in the city at the end of July. We are talking about the event Concurso Internacional de Piano Ciudad de Santander, one of Santander’s oldest festivals. All pianists around the world, both those who have made “a name” for themselves in the world of classical music and those who are yet to make their way, dream of getting there because of … Open