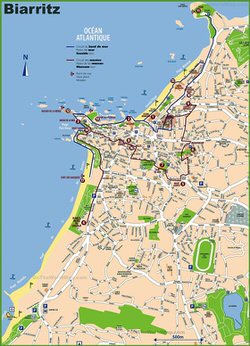 Interactive maps of hiking and biking routes around Biarritz

1. You can zoom in/out using your mouse wheel, as well as move the map of Biarritz with your mouse.
2. This interactive map presents two modes: 'Biking Routes' and 'Hiking Routes'. Use the '+' button on the map to switch between them.

This Biarritz map has two modes: 'Railway Network' and 'Landscape & Rural Map'. Use the '+' button on the map to navigate.

Our guide to Biarritz

Traditions and mentality of Biarritz

Love for the sport is another feature of the local people. Taking care of their own health is among their main concerns. The city is called the European capital of surfing not without reason. And in the mornings, here you can meet a lot of jogging people. Another feature of the locals is a high level of responsibility. A resident of Biarritz never mouths empty words, tries to avoid conflicts, and always fulfills … Open

A favourite place for walking among the guests of the resort is the coastline, next to which there are popular hotels, restaurants and entertainment venues. At the end of the coastline there is an outstanding architectural monument - Villa Belza, which was built in the late 19th century. The history of this luxury villa is full of interesting events, originally it housed private apartments. After that, the villa … Open

Those who appreciate relaxing in a picturesque area will also have a chance to stay in an elite resort hotel - Résidence Mer et Golf Eugénie offering its 4-star services. The hotel is located in a private garden occupying an area of 2 hectares. Its vast private area accommodates a variety of sports grounds, including a mini-golf course and several tennis courts. Despite its high status, the hotel has a very easy … Open

Biarritz for children - what to visit

With children of school age, as part of the cultural program, you can look into the local history museum, Musee Historique de Biarritz. The variety of exhibits presented here is striking. Old clothes, unique books, black and white photographs, paintings and sculptures, are just some of the antiques that can be seen in the museum. The museum is located in the restored building of a former church and is distinguished … Open

A great example of the modern style and luxury is Mercure Le Président Biarritz Centre. Its rooms are dominated by white and cherry shades, and accessories made of noble woods make the setting even more aristocratic. Each room has a huge window, through which it is convenient to enjoy the panoramic view of the coast. The hotel public areas' design is also very elegant and refined, it is complemented by built-in … Open

Another attractive place for admirers of elite shopping is Natacha multi-brand store. It has Dior and Prada pavilions and a large Hugo Boss boutique. In this store, you can get not only new clothes and shoes but also stylish brand accessories, as well as cosmetics and perfumes. Budget travelers should visit the neighborhood of Biarritz, where a popular BAB2 outlet is located. All-year-round quality items of … Open