Detailed hi-res maps of Basque Country for download or print 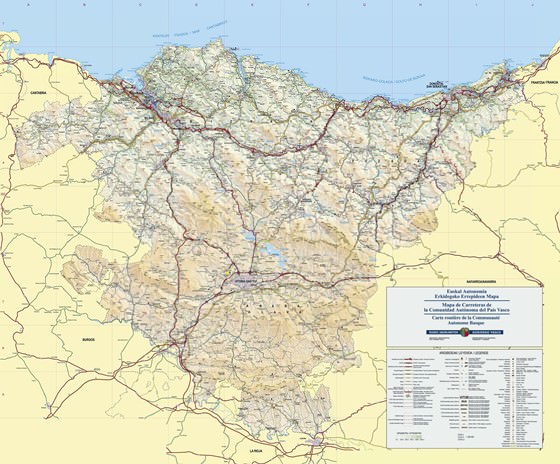 Search for services, infrastructure and sights on map of Basque Country

Our guide chapters over Basque Country

A visit to a sidreria, on the other hand, will cost you much less. A sidreria is a traditional Basque restaurant, where the menu is based on the courses, served with cider. Under any circumstances, do not miss the opportunity to try an omelet with codfish, a beef chop, and Idiazabal cheese, which is served as a dessert with nuts and quince jam. The Basque Country is famous for its grilled dishes. When in Getaria, … Open

Traditions and mentality of Basque Country

The Big Week Festival in the middle of August is the time of festivity, when you can feel the positive and carefree atmosphere. The same, as during Piratas de Donostia and Carnaval festivals. On the third week of July, San-Sebastian welcomes Jazzaldia, the biggest European jazz festival, that hosts the world famous stars. There is also an International Film Festival. In Enrique and in Balmaseda, in June, you may … Open

Fans of event tourism will find it interesting to visit Gipuzkoa Province. Interesting national celebrations and unusual contests take place virtually every month there. The province is home to many talented musicians and dancers. Dancing classes by local residents are always very popular with tourists who visit this part of the country. The town of Tolosa is an absolutely gorgeous place that has not … Open

Basque Country for children - what to visit

If you are going to San-Sebastian, then certainly go to the amusement park, after you’ve been to the oceanarium. The park is located on Igueldo Mountain. It does not only have a variety of entertainments from Chamber of Horrors to Swiss rollercoaster, but also an amazing view. By the way, here you will be able to touch the history – an ancient cable railway and other rides are intact since the park was … Open

Make sure to visit Ribera Market in Bilbao. It is not only one of the biggest European indoor markets, but also a place with a rich history. At the same place, where now the modern complex is, a street market was located from the 14th century. Every Sunday you can visit a flea market on Plaza Nueva. By the way, you can meet a real medieval merchant in the Basque Country – Balmaseda city hosts a costume festival … Open

The very attractive and unusual holiday destination is Siete Playas, where there are seven secluded coves. These places have long been chosen by nudists and divers; beauty of the underwater world is simply indescribable. Siete Playas is considered hard-to-reach, as you have to go through the complex mountainous terrain to get there. The total length of the coastline is approximately 2.5 kilometers, so it won’t … Open