Top places to stay in Bologna - most luxury and fashionable hotels 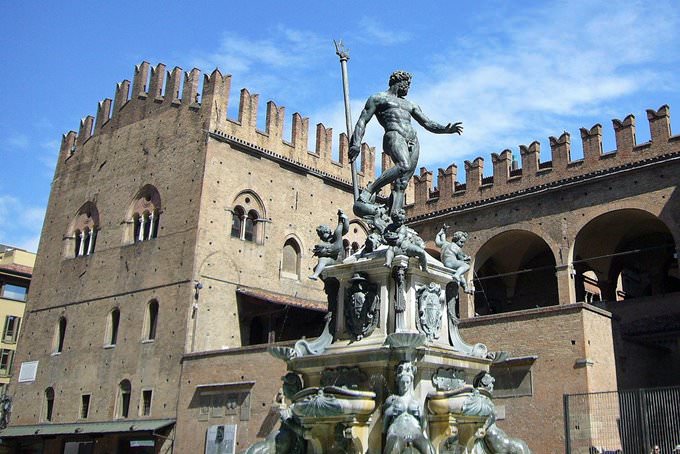 that is located in the city center and occupies a unique 18th-century palace. The hotel offers one of the city's most expensive hotel rooms - an elegant royal suite covering 150 square meters, the cost of accommodation is about 2,000 USD per night. The room has priceless antique furniture and is decorated with genuine artistic masterpieces, and its spacious bathroom is made of the rarest marbles. The hotel also houses famous Cafe Marinetti known for its refined historical atmosphere.
Aemilia Hotel Bologna
Check on the map. From Bologna center - 1.3 km
A few steps away from the bustling city center is Aemilia Hotel Bologna

, which is mainly focused on connoisseurs of modern luxury. Spacious rooms of the hotel are decorated in strict colors. In addition to standard rooms, several attractive luxury suites are available to its guests. The suites decorated with contemporary works of art have large bathrooms with glass partitions and original lighting. The hotel houses its own national restaurant - Gurmé, the bright hall of which is painted in pearly colors. A stylish bar is also available to hotel guests at night.
Check the hotel prices and availability
Copyright www.orangesmile.com
NH Bologna De La Gare Check on the map. From Bologna center - 1.1 km
Travelers who are not used to saving on accommodation services should pay attention to NH Bologna De La Gare

Hotel. It provides the most demanding guests with several luxury suites where in addition to a cozy bedroom there is a large living room and a private terrace equipped with garden furniture. The hotel has one of the most famous and popular national restaurants in Bologna - Amarcord. Here, popular national treats are prepared according to old recipes and a separate menu is prepared for vegetarians and the smallest visitors.
Check the hotel prices and availability
Savhotel Check on the map. From Bologna center - 2.2 km
In walking distance from the Bologna exhibition center is Hotel Savhotel

that has won the recognition of thousands of customers thanks to its impeccable service and well-equipped rooms. Luxurious wooden parquet, a huge LED TV, high-speed Internet access and a chic bed dressed with exclusive linens - absolutely all guests of the hotel can enjoy this comfort.
Check the hotel prices and availability
I Portici Hotel Bologna Check on the map. From Bologna center - 0.9 km
Tourists wishing to stay in the historic district will surely appreciate I Portici Hotel Bologna

. A chic historic building housing the hotel has been completely restored. Original decoration and unique frescoes adorning high ceilings have been preserved as much as possible. You can see priceless works of art not only in public areas - frescoes decorate ceilings of some rooms. The hotel is aimed at a wide range of guests: it has spacious rooms for guests with children, there is a conference room for business guests and a Michelin-starred restaurant for true gourmets.
Check the hotel prices and availability
Royal Hotel Carlton , which is a few minutes walk from Bologna Centrale railway station. The most expensive hotel room is a presidential suite, a night in which would cost you about 1,500 USD. A luxurious interior with an abundance of antique elements, a large marble bathroom with a modern spa bath, a spacious fully furnished terrace are just some of the distinctive features of the luxury suite. The hotel is a single complex with popular Monrif by Clarins wellness center famous for its wide choice of massage rooms and various types of sauna.
Check the hotel prices and availability

This guide to posh and fashionable grand-hotels of Bologna is protected by the copyright law. You can re-publish this content with mandatory attribution: direct and active hyperlink to www.orangesmile.com.
Bologna - guide chapters 1 2 3 4 5 6 7 8 9 10 11 12 13

Viareggio
Travelers who have long dreamed of relaxing in an elegant historical setting should visit the elite Hotel Plaza E De Russie. Designed with priceless antique furniture, live plants, and flowers, it boasts of a very sophisticated and romantic atmosphere. Guests have access to a very cozy American-style bar and a restaurant with an outdoor rooftop terrace. A better place than ... Open »
Vicenza
Hotel Palladio is another unique historic building located a couple of minutes’ walk from Piazza della Signoria. Its interior was designed in a modern romantic style, complemented by unique elements of pristine decoration: stone walls, beamed ceilings, high windows, and stone stairs. In addition to standard rooms, the hotel has very attractive duplex suites equipped with ... Open »
Arezzo
Travelers preferring rural getaway don’t have to give up modern comfort. They are sure to enjoy Badia di Pomaio. This hotel is located in the immediate vicinity of Arezzo, on top of a hill, and takes a completely renovated villa of the 17th century. Interior is kept in historical style; one of the two restaurant’s rooms is located in an old basement with a vaulted stone ... Open »
Bergamo
A very special accommodation place is GombitHotel, which is considered one of the best hotels in Bergamo. The hotel is located a few steps from the legendary Gombito Tower and other historical attractions. The inn itself also is very valuable from a historical point of view. The hotel has its own inimitable style complemented by unique pristine finish and vintage ornaments. ... Open »
Genoa
One of the most upscale hotels in Genoa is the AC Hotel Genova by Marriott, which attracts guests with its elegant and sophisticated setting. The hotel has a beautiful wellness center with a Turkish bath and a fully equipped gym. In summer, a relaxation area with sun loungers is outfitted on the rooftop. The first-class hotel is ideal for families, and for large companies ... Open »
OrangeSmile.com - online travel reservation expert providing reliable car rental and hotel booking services. We feature more than 25.000 destinations with 12.000 rental offices and 200.000 hotels worldwide.
Secure Server