Sightseeing in Ascoli Piceno - what to see. Complete travel guide 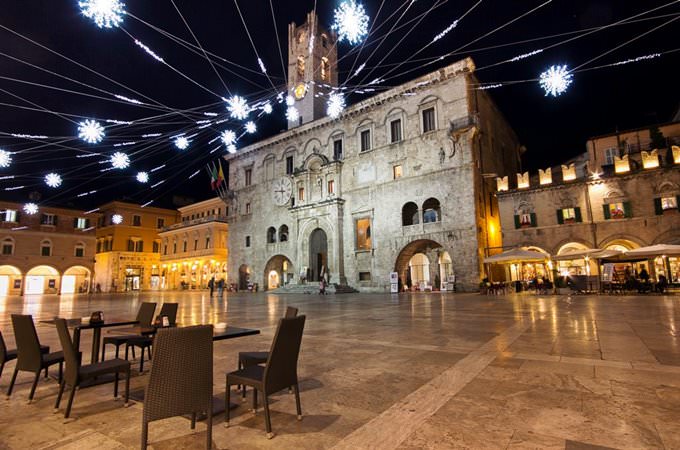 Ascoli Piceno is a large town in the Marche region of Italy. The distance to the Adriatic Sea from Ascoli Piceno is only twenty-five kilometers. The town is located in an unusual place – it looks like the territory of the city is surrounded by stone guardians formed by nature. Hills securely protect Ascoli Piceno from winds and create a unique atmosphere in the town. One mount is called Monte Ascensione (Ascension Mountain), one mountain is dedicated to Saint Mark, and one mountain group is called the Montagna dei Fiori (Flower Mountain).
The Italian population of Piceni was the founder of the town. They were the first inhabitants in this region who settled yet during prehistoric times. The town got its name after the Piceni people. During the period of antiquity, one of the most important roads of that time, Via Salaria, crossed the town. This was the typical road for merchant caravans that were bringing salt from the Adriatic to the central regions of the country.
268 BC marked the start of a very important period in the history of the town. Ascoli Piceno became nominally independent from Rome. Year after year, local people were working hard to make their homeland prosperous. However, the town’s authorities formed a coalition with other Italian cities and decided to revolt against Rome. They lost, and the region’s infrastructure was completely destroyed. Copyright www.orangesmile.com
In the Middle Ages, Ascoli Piceno, just like a phoenix bird, rose from ashes. However, many tough periods were in store for the population of the town. The Ostrogoths and Lombards plundered the region. Starting from the 12th century, the territory was continuously changing rulers for as long as three centuries. At the end of the 15th century, Ascoli Piceno became a part of the Pope’s Suzerainty. As a part of this formation, Ascoli Piceno waited until the launch of the Italian Kingdom. 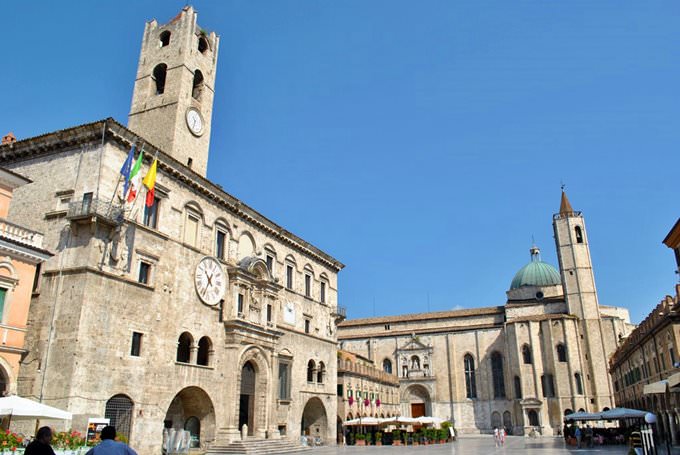 The Italian town of Ascoli Piceno is renowned for its main square, Piazza del Popolo. Known as the “Living Room of Italy”, Piazza del Popolo is one of the most beautiful squares in the country despite its small size. Two majestic medieval palaces – the Palace of the Commune and the Baptistery – form another gorgeous square that is not to be missed, Piazza Arringo. The old part of the town is the location of a gorgeous cathedral dedicated to Saint Emygdius. It is particularly pleasant to admire the luxury of the landmark in one of the local cafes and restaurants that are open right at the square.
Ascoli Piceno hosts a number of festivals and celebrations every year, but La Quintana festival is the most popular of them all. This region has a steady and peaceful life. However, the town completely changes during the tournament period. This important event in the cultural life of the town takes place two times a year. For tourists, it is incredibly interesting to visit La Quintana. This is like a journey to the past where noble knights fight for the hearts of beautiful ladies. The schedule of the event always includes different exhibitions, theatrical performances, festive dinners, and a special parade dedicated to the history of this region. Tourists can try archery and watch an interesting competition in flag juggling. 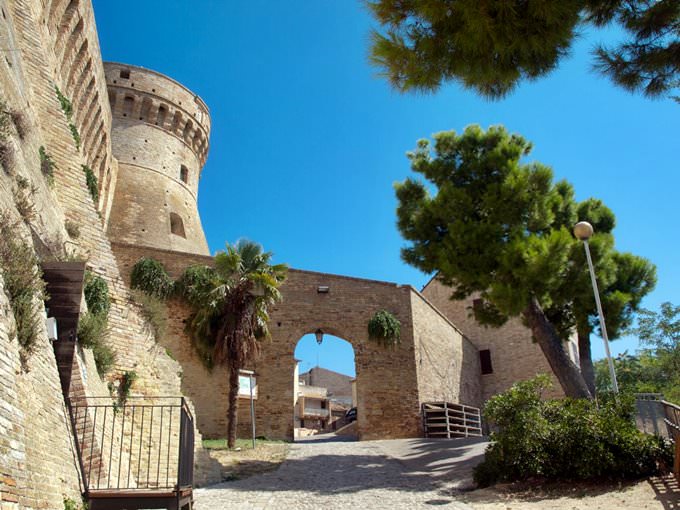 Many tourists know Ascoli Piceno as a town of churches. Indeed, there are many notable churches here. The Saint Emygdius Cathedral definitely deserves the attention of tourists. This eye-catching building dates back to the fifth-sixth centuries. Before the cathedral, there was a Roman basilica on this site. The basilica was destroyed, and only an underground crypt survived. Works with the façade part of the cathedral ended in 1529. The cathedral got this name once Saint Emygdius, the holy patron of Ascoli Piceno, was buried there. When approaching the building, it is hard not to notice giant columns and two towers built in the 11th century.
Do you like theatre? If the answer is yes, you will find it incredibly interesting to visit the Ventidio Basso Theater. The theater’s atrium has gorgeous décor and statues created by architects Giorgio and Emidio Paci. Inside, visitors will find luxuriously decorated, spacious halls that can provide space for up to ten thousand people. The stage curtain is another precious artifact – it is made of red velvet that was very expensive in the past. Gold décor makes the curtain look even more impressive. In this theater, visitors can watch local plays, listen to classical music concerts, and enjoy opera. 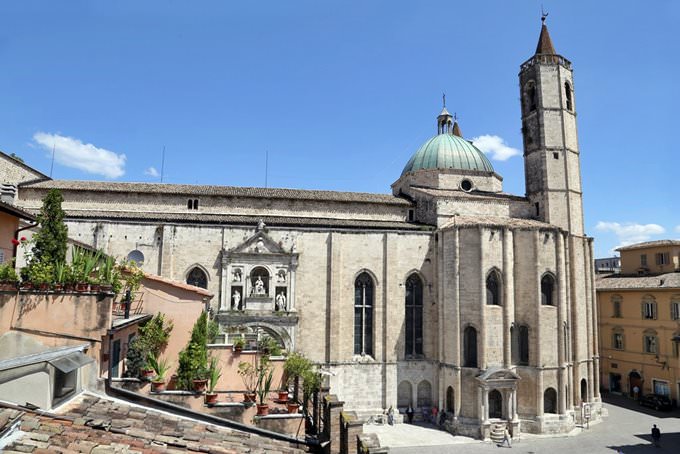 City tours, excursions and tickets in Ascoli Piceno and surroundings

♥   Castle 'Castel Manfrino' Valle Castellana, 11.9 km from the center. On the map

♥   Castle 'Rocca di Urbisaglia' Urbisaglia, 41.3 km from the center. On the map

♥   National Park 'Parco nazionale della Maiella' , 95.1 km from the center. On the map

Search touristic sites on the map of Ascoli Piceno

Sightseeing in regions nearby Ascoli Piceno

Pescara
Besides the relaxing rest on the beach vacationers can visit numerous excursions and discover main attractions of the city. In Pescara you will find numerous old buildings, the most popular of which are San Setteo Cathedral, the Government Palace and the house of Gabriele D'Annunzio. While making a walk on the streets of the city, you will see old churches and temples, the ... Open »
Marche Region
Urbino is literally created for hiking, as there are unique attractions at every step. The historic city center is included in the list of World Cultural landmarks; the main attraction of the city is Palazzo Ducale. It’s the large-scale architectural complex with many buildings that have miraculously managed to survive to the present day in their original form. The beautiful ... Open »
Assisi
These are not all attractions that Assisi can offer to its guests. There is an interesting church museum near the exit where visitors can look at paintings and other artifacts of the 14th and 15th centuries. The terracotta sculpture named Our Lady of Sorrows is a unique relic of the region. Besides it, visitors can see an ancient organ and the most interesting – relics of ... Open »
Ancona
Wonderful nature of Ancona is better to be viewed in Parco del Conero. This park has some really rare and exotic trees and plants, picturesque caves and rocky cliffs. The Museum of Gomer for blind people is among most unusual cultural places. All exhibits featured in this museum can be touched, so you will not find old and famous masterpieces here. However, the precise copies ... Open »
Perugia
Perugia is a famous student city and a tourist center that attracts guests by its magnificent architecture, as well as numerous festivals and holidays. After the opening of the International University Palazzo Gallenga this place has been visited by many tourists and guests, the majority of which are young people. Each year new nightclubs and discos are opened in the city, so ... Open »

All about Ascoli Piceno, Italy - sightseeings, attractions, touristic spots, architecture, history, culture and cuisine. Prepare your trip together with OrangeSmile.com - find out the 'must see' things in Ascoli Piceno, which places to visit, which excursions to take, where the breathtaking views are waiting for you. Planning your trip with this travel guide will help your to get the most out of Ascoli Piceno in few days.