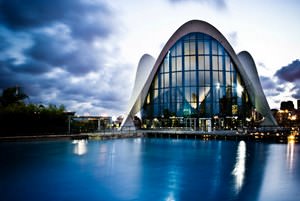 Valencia Cathedral is certainly one of the main symbols of the city. The first church on the site of the modern cathedral was built in ancient times. Later it was destroyed by the Moors, who built a beautiful mosque instead of the church. The foundation of that ancient mosque became the basis for the cathedral, which travelers can see these days. The walls of the cathedral keep a valuable relic - Sagrada Cena - an old bowl, which many experts consider to be no more than the Holy Grail. Each year the cathedral is visited by tens of thousands of people, who come to look at the legendary artifact.
Advices to travellers: what you should know while being in Valencia
1. Currency is better to be exchanged in banks. They usually open early, no later than at 9:00 am, and serve clients up to 14:00. Many exchange offices may work around the clock, but they …

Open
Serranos Gates are a no less striking tourist attraction. The gates were built in the beginning of the 13th century. They act as a symbolic entrance to the street with the same name. Originally the gates belonged to a massive system of fortifications. All the buildings and the wall, which had surrounded the city, were destroyed in the 14th century, so today only Serranos Gates remind of magnificent buildings of the past.
Vacationers should definitely not forget to visit Science Center, which is located just a few steps away from the pond. This is a beautiful hemispherical building. The total square of the large-scale complex of is more than 350 thousand square meters. Every day Science Center holds interesting lectures and laser shows devoted to natural science topics. Here you can watch films about mysteries of nature and great discoveries of scientists, visit the local planetarium and see interesting exhibitions in Museum of Natural Science. Copyright www.orangesmile.com
Extraordinary weekend in Valencia - unusual places, services and attractions for travel gourmet
Besides exploring historical sites, in Valencia, you can walk around museums, relax on the city beaches, and visit restaurants. In this amazing Spanish city, you'll be able to take a boat …

Open
Palau de la Generalitat is a true example of architecture. The beautiful building was constructed in 1403. Today the palace is occupied by Catalan government. Palau de la Generalitat is traditionally used as the venue for receptions and important negotiations. The entrance to the palace is crowned by a statue of St. George - the patron saint of Catalonia. The palace’s courtyard is also worth your attention. It is made in unique Gothic style and is decorated with sculptures created by most famous medieval craftsmen. There is an ancient chapel of Sant Jordi near the palace. It also attracts visitors by its elegance and beauty. 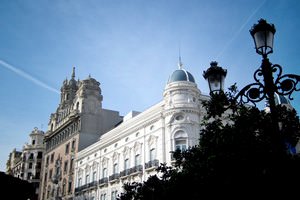 Art connoisseurs should definitely make an excursion to Museum of Fine Arts, which exhibits a wonderful collection of paintings by eminent artists. Priceless works by Goya, Joaquin Sorolla, and El Greco attract numerous art lovers to the museum. A walk through historic district of Valencia will also bring a lot of unforgettable memories. You can find beautiful old buildings and monuments simply everywhere.
Valencia design-hotels for stylish travellers
Valencia is famous for its wonderful design hotel, and Hotel Dimar can be found near Cánovas Square. All its black-and-white rooms are furnished with luxurious beds of impressive size and …

Open
Many tourists begin their acquaintance with the city from the Plaza de Toros de Valencia – such arenas are in every major city of Spain, and, in fact, they demonstrate the “soul” of the city. And, of course, if you manage to attend the bullfight during your holidays here, it will be remembered forever. The Plaza de Toros in Valencia is very similar to the Roman Colosseum; while building the arena the architect was inspired by this very building. Another place that should be visited is the Plaza Redonda – a kind of “square-arena”. It has a rounded shape, and inside you can find a textile market. There is a fountain in the center. In fact, it is not so easy to find the square, as it is located inside the buildings surrounding it. Therefore, it is better to ask the local residents for direction. 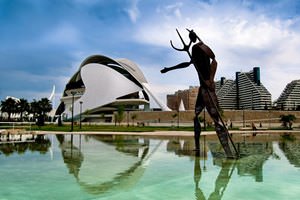 A stunning walk awaits those who would decide to stroll along Casco Antiguo. Here along the streets, you will meet costumes that the locals wore during the carnival. A completely unusual sight and the impressions that a walk along this street gives you is amazing. Also, the amount of greenery on the balconies is impressive, and all these bring a special share of romance. It is also worth taking a walk along the oldest neighborhood of the city, namely, the Barrio del Carmen. It is quite easy to lose the feeling of time here – while walking here, you cannot be completely surprised that a knight can come around the corner, and a carriage with a noble lady will ride towards him. And you can truly meet them – themed parties in Valencia are really popular.
Top places to stay in Valencia - most luxurious hotels
In Valencia, there are several special hotels that are sure to please fans of staying in an exclusive setting. Caro Hotel that occupies a unique century-old building in the heart of Valencia …

Open
Great views of Valencia open up from the city’s highest bell tower. It is about the Miguelete. The rise is quite long – a spiral staircase leads to the top of the bell tower, but the views that can be beheld are definitely worth it. Another beautiful viewing platform is called Ateneo. There is a 360-degree view here. You can have a great time by walking along the Puerto de Valencia – from here also unbelievably beautiful views of the sea are opened up. This is a great place at any time of the day, but during the sunset, a walk will be the most romantic one. 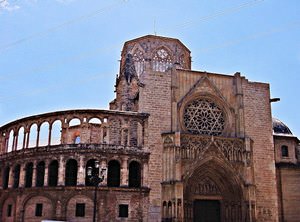 An interesting architectural structure is the Edificio de Correos y Telegrafos, the construction of which began in 1915. Three styles were mixed here: modernism, baroque and classicism. A very beautiful facade with sculptures of winged creatures, clocks, emblems, and ornaments will immediately attract your attention, as well as the elegant steel tower. The Ayuntamiento de Valencia is another public institution, thanks to which friendly envy is felt towards those who were lucky enough to work in such a beautiful building. The building is luxurious – richly decorated facade with columns, sculptures, clocks and some symbols of the city contribute to this.
Old hotels keeping the history of Valencia
Some popular Valencia hotels occupy unique historical buildings and carefully preserve the spirit of old times. They include Ad Hoc Monumental Hotel housed in a fabulous 19th-century …

Open
One of the oldest buildings in the city is the La Lonja de la Seda. It was built in the 15th century and was a guild house where silk was traded. Spiral columns, arched ceilings, and marble floors make a special impression. Nearby you can find the tower where dishonest traders were punished in the olden days. The place is listed as a UNESCO World Heritage Site. Around here you can wander into the liveliest place in Valencia – namely, the Mercat Central. The market is interesting not only in terms of the fact that you can buy all sorts of goods here but also from an architectural point of view. 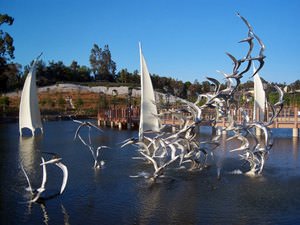 There are many interesting religious monuments in Valencia, which will be mention sacrilegious not to mention. First of all, we are talking about the Iglesia de San Nicolas de Bari y San Pedro Martir, a beautiful example of the 15th-century gothic style. The building is decorated with Baroque elements, which gives it a special charm. The interior is not inferior in elegance to the exterior, if it does not surpass it. The Monestir Sant Miquel dels Reis is another fascinating place. It was founded in the 16th century in place of the Order of the Cistercians that existed here at the time. The monastery is majestic and this is what makes it attractive to begin with. One more place to visit is the hidden pearl of Valencia, located in the Universidad Católica de Valenci building. We are talking about the Cripta Arqueologica de San Vicente Martir.

In the section below, you can get one of our excursion, activities or city discovery tours over Valencia and surroundings. Our website offers 10-30% lower ticket prices, when compared to the offline purchase on the spot.

This guide to cultural sights Valencia is protected by the copyright law. You can re-publish this content with mandatory attribution: direct and active hyperlink to www.orangesmile.com.
Valencia - guide chapters 1 2 3 4 5 6 7 8 9 10 11 12 13

What to visit during two-day excursion in Valencia

Photogallery of cultural heritage of Valencia

Excursions over cultural sights of neighbours of Valencia

Alcala del Jucar
The town has one more important religious attraction - Iglesia de San Andrés. It was founded in the 15th century. The church underwent numerous restorations and rebuildings after the official opening. The last extensive restoration took place in 1767. Iglesia de San Andrés has almost not changed since that time. A part of the church is also built in the rock. Iglesia de San ... Open »
Benidorm
Iglesia de Sant Jaume is widely known among the religious sites of the city. The beautiful cathedral is distinguished not only by its unique architectural shape and skillful design of the facade, but also by the richest selection of valuable artifacts and ancient icons that decorate its halls. Aigera Park is a no less interesting object of excursions. The design of the park is ... Open »
Alicante
Among the cultural institutions of the city we should definitely mention Alicante Museum of Contemporary Art, which exhibits a large collection of sculptures and paintings by local artists. A visit to Provincial Museum of Archaeology will be another unforgettable journey. In 2004 the museum received the proud title of the best museum of Europe. Many of the items exhibited ... Open »
Albacete
Alcalá del Júcar Castle built by the Arabs in the early 13th century is definitely worth visiting. The castle had been repeatedly rebuilt by Christians, changing its purpose several times. One of the main fortifications erected in the 12th century is the Castle of Almansa. At the beginning of the 14th century, the fortress was almost completely rebuilt by the order of the ... Open »
Ibiza Island
Those, who prefer everything modern, will like The Museum of Contemporary Art. Ironically, it is located in a historic building of the Old Town. Unusual paintings and bizarre statues coexist here with the walls with Carthage stonework. Those, who like mystic things, will definitely try to visit Es Vedra island, which has a weird glory. The compasses and all the modern ... Open »
Ibiza
Queen Sophia Park and Sun Square are definitely no less important sights of the city. These sights are always mentioned together. The reason for this is that the park and the square are connected by a tunnel, which is called Portal Nou. The length of the step tunnel is 50 meters, and its height estimates 3 meters. The entire length of the tunnel is equipped with special ... Open »

Culture guide to Valencia. Which fascinating sights to visit once you are in Valencia: temples, churches, museums, theaters and castles. Recommendations (with addresses, phone numbers and links) on the places 'must visit' in Valencia. Plan your own city excursion by using this page info!