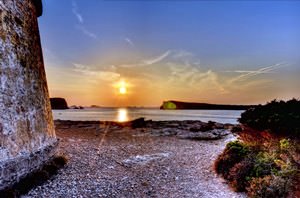 Ibiza can be simply proud of a rich choice of historical sites and interesting museums. Visitors are offered an interesting cultural program that will help them learn a lot about the history of the city and lifestyle of its citizens. Without a doubt, Almudaina Castle is the most important sightseeing object of the island. The castle was built in the first half of the 16th century. It is open to public so everyone is welcome to attend beautifully decorated halls and make a walk through long corridors of the castle. Archaeological excavations never stop near the castle as scientists have discovered there the ruins of old fortifications. According to one theory the first building on the site of the fortress appeared back in the 7th century.
Advices to travellers: what you should know while being in Ibiza
1. The period from May to October is considered the peak season as these months are distinguished by the most favorable weather. Travellers who decide to go to Ibiza in summer should take …

Open
Queen Sophia Park and Sun Square are definitely no less important sights of the city. These sights are always mentioned together. The reason for this is that the park and the square are connected by a tunnel, which is called Portal Nou. The length of the step tunnel is 50 meters, and its height estimates 3 meters. The entire length of the tunnel is equipped with special torches. A walk along the tunnel is one of the most favorite pastimes of travelers.
Santo Domingo Church is usually mentioned among the best known religious sites of the city. The church is a landmark of the national importance. The first building on the site of the modern church appeared back in the 12th century, and later it was repeatedly expanded and supplemented with new elements. Nowadays the beautiful cathedral is a unique combination of three different architectural styles. Despite this peculiarity the church looks very harmonious and effective. Copyright www.orangesmile.com
Extraordinary weekend in Ibiza - unusual places, services and attractions for travel gourmet
…

Open
Eivissa Cathedral is a true example of Baroque style. The cathedral was built on the initiative of Catalan conquerors in 1235. Previously the site of the cathedral was the location of one of local mosques. The invaders completely destroyed the building, leaving only its foundation. Until the 17th century the cathedral was a grim and stern Gothic building, and then it completely changed its appearance, turning to a no less charming baroque style building. Among the cultural institutions of Ibiza tourists are recommended to visit Archaeological Museum, the collection of which includes hundreds of priceless artifacts. Travellers should not forget to include a visit to Ethnographic Museum and Van der Wurth Gallery in their cultural program. The latest institution will be appreciated by modern art connoisseurs. Sa Nostra Culture Hall regularly exhibits a variety of events, from theater performances to concerts of classical music.

In the section below, you can get one of our excursion, activities or city discovery tours over Ibiza and surroundings. Our website offers 10-30% lower ticket prices, when compared to the offline purchase on the spot.

This guide to cultural sights Ibiza is protected by the copyright law. You can re-publish this content with mandatory attribution: direct and active hyperlink to www.orangesmile.com.
Ibiza - guide chapters 1 2 3 4 5 6 7 8 9

What to visit during two-day excursion in Ibiza

Unique spots in Ibiza and near 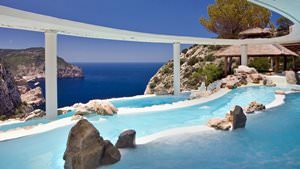 Distance from Ibiza center - 19.2 km.
In Ibiza there is a well-known resort hotel Hacienda Na Xamena, on the territory of which there is a chic pool, which stands out from the others. The hotel is located in a picturesque bay, on a rocky coast. Its pool is located on three levels and represents a single incredibly harmonious complex, surrounded by slender columns and arches. … Read further

Photogallery of cultural heritage of Ibiza

Excursions over cultural sights of neighbours of Ibiza

Ibiza Island
Inside the castle there is the most beautiful baroque architecture monument – the Cathedral, dedicated to Our Lady of the Snows. However, the inside décor of the castle corresponds more to the austere Romanian style. Inside you can see the Ark and the Statue of Our Lady of the Snows. Santo Domingo Church, which was constructed in the 13th century, was built fully in the ... Open »
Palma de Mallorca
The palace features not only bright and impressive frontage but an ingenious interior design. Its walls keep a rich collection of the art objects, antique furniture and military attributes. The Bellver Castle (Castillo de Bellver) is located on one of the high hills of the island. The castle was erected in the first part of the 14th century. The name of the castle can be ... Open »
Benidorm
Benidorm will attract not only fans of beach rest, but also fans of exciting excursions. Its territory is the location of a huge number of historical monuments. Here are opened numerous interesting museums and galleries. Beautiful Gran Hotel is one of the most striking sights of Benidorm. This is the highest hotel complex in Europe and a true example of modern architecture. The ... Open »
Mallorca
During the tour visitors will be offered to walk through large halls of the castle and then appreciate a breath taking panoramic view as the viewing platform of the castle offers unforgettable scenes. A genuine masterpiece of architectural art is the Royal Palace of La Almudaina. Few centuries ago it served as the main residence of Moorish vizirs. Nowadays the buidling serves ... Open »
Valencia
Vacationers should definitely not forget to visit Science Center, which is located just a few steps away from the pond. This is a beautiful hemispherical building. The total square of the large-scale complex of is more than 350 thousand square meters. Every day Science Center holds interesting lectures and laser shows devoted to natural science topics. Here you can watch films ... Open »
Alicante
Santa Barbara Fortress remains one of the main symbols of the city. The fortress was built on a high cliff. Previously the site of the castle housed numerous fortifications as from ancient times Mount Benacantil has had an important strategic purpose. There are several viewing platforms near the castle, from which everybody can enjoy panoramic views of the city and the ... Open »

Culture guide to Ibiza. Which fascinating sights to visit once you are in Ibiza: temples, churches, museums, theaters and castles. Recommendations (with addresses, phone numbers and links) on the places 'must visit' in Ibiza. Plan your own city excursion by using this page info!