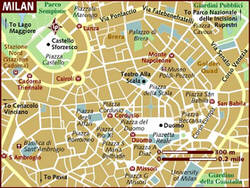 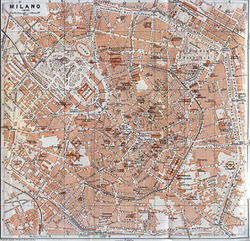 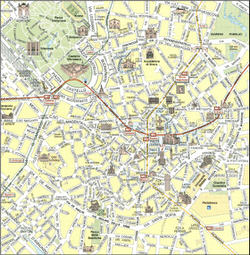 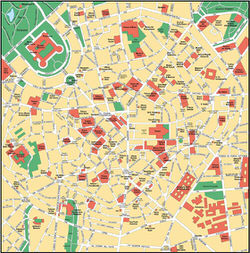 Interactive maps of hiking and biking routes around Milan

1. You can zoom in/out using your mouse wheel, as well as move the map of Milan with your mouse.
2. This interactive map presents two modes: 'Biking Routes' and 'Hiking Routes'. Use the '+' button on the map to switch between them.

This Milan map has two modes: 'Railway Network' and 'Landscape & Rural Map'. Use the '+' button on the map to navigate.

Our guide to Milan

A popular upscale hotel in Milan, Château Monfort has won the admiration of numerous travelers because of its stylish and unforgettable design. The hotel is open in a beautiful historical building and has many elements of the original design. These elements were skillfully mixed with elegant modern accessories. Some pieces of furniture have been replaced with old chests, and in bathrooms, beautiful marble décor … Open

Quadrilatero D'Oro or the Golden Rectangle is one more excellent destination for luxury shopping in Milan. Besides premium designer shops that sell clothes and accessories, there are outstanding jewelry salons, including Bvlgari store that is loved by numerous international celebrities. This district has some peculiarities – in many premium shops, it is possible not only to purchase ready items but also order … Open

Hotels with history of Milan

Open in the building of a former 15th-century monastery, Palazzo Delle Stelline never ceases to attract guests with its fantastic historical atmosphere. Only a short walk separates the hotel from Santa Maria delle Grazie Church. The building of the hotel is surrounded by a well-kept old garden. The hotel has a national cuisine restaurant that is open in a beautiful hall with arched ceiling and massive old … Open

2. The majority of religious attractions are not allowed to be visited by tourists during service and lunch break, so before you go you should definitely clarify the convenient time for visiting the shrine of your choice. 3. It’s recommended to leave tips in local restaurants and cafes. The amount of a tip is usually 10% of the total bill. Tips are also welcome in a taxi, but in this case … Open

Sports for the Italians is important, and takes their life is not the last place. For fans of extreme sports, there is a great opportunity to get an adrenaline rush in Italian!You can not leave Italy without trying to drive true-Italian supercars. Ferrari or Lamborghini, which one you want to drive? Maybe both? Order a Test Drive Ferrari, a racing legend, and get an opportunity to test yourself on the International … Open

Weekend in Milan in original style

Have you ever enjoyed the sauna effect in a tram? No, it’s not about a “mesmerizing” ride in a super crowded tram on a hot day, but about a real high-class sauna open in a tram car. The unique service is provided by QC Termemilano Spa. Fans of wellness treatments will be excited to try a creative sauna that has been open in a real tram car. Tram del Benessere sauna looks the same with classic saunas and has … Open