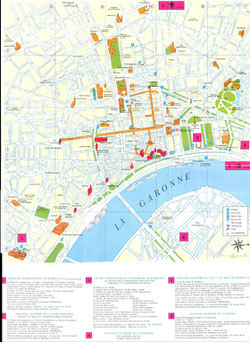 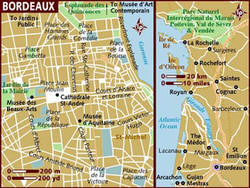 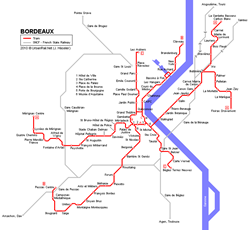 Interactive maps of hiking and biking routes around Bordeaux

1. You can zoom in/out using your mouse wheel, as well as move the map of Bordeaux with your mouse.
2. This interactive map presents two modes: 'Biking Routes' and 'Hiking Routes'. Use the '+' button on the map to switch between them.

This Bordeaux map has two modes: 'Railway Network' and 'Landscape & Rural Map'. Use the '+' button on the map to navigate.

Our guide to Bordeaux

In the central district of Bordeaux, you will find one of the most refined and elegant hotels in the city - Chambre en Ville. Housed in a chic historic building, it offers customers a choice of modern rooms painted in various colors. All the rooms are decorated with elegant furniture and an abundance natural-wood accessories and the variety of bright fabrics and beautiful paintings makes the atmosphere in the rooms … Open

Place des Grands-Hommes is a convenient entry point for shopping in Bordeaux. Many shopping streets originate nearby. They basically house prestigious stores of elite brands, such as Kenzo, Valentino, and Christian Lacroix. The level of prices in them is quite high, however, the quality of goods always remains on top. Near the square are popular jewelry stores, clock shops, and excellent cosmetics and perfumery … Open

In the picturesque historic district you will find Best Western Bordeaux - Bayonne Etche-Ona. A building occupied by the hotel is a priceless historical monument that has retained its original appearance as well as interior decoration thanks to the reconstruction. In the rooms you can see fragments of original stone walls, and in the basement with a vaulted stone ceiling, there is a conference room. The hotel is … Open

9. You may see special signs near many restaurants and cafes. They indicate the average cost of meals. Budget travelers are recommended to choose numerous cafes, the choice of dishes in which can easily compare with many popular restaurants. 10. Phone calls to other countries are better to be made from special telephone tubes, which can be found near all major shopping centers and government … Open

A real gift for lovers of graceful horses will be the opportunity to ride these majestic animals - for this purposes, the city offers Center equestre municipal ucpa de saint Medard en Jalles. This place is definitely worth visiting, if you're traveling in Bordeaux with children. You can also rent an iron horse with the help of Ride & Chateaux, so bear this agency in mind. Those preferring to spend time in nature … Open

Weekend in Bordeaux in original style

Do you associate Bordeaux only with historical monuments and French restaurants? It's time to take a look at this wonderful French town in another way. On weekdays, the central Quinconce Square is nothing extraordinary. But try to visit this place on a Sunday morning! The square turns into an amazing market where you can buy a lot of exclusive gifts and try the most popular national treats. Believe that the best … Open