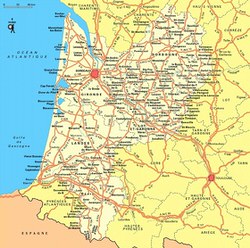 Interactive maps of hiking and biking routes around Aquitaine Region

1. You can zoom in/out using your mouse wheel, as well as move the map of Aquitaine Region with your mouse.
2. This interactive map presents two modes: 'Biking Routes' and 'Hiking Routes'. Use the '+' button on the map to switch between them.

This Aquitaine Region map has two modes: 'Railway Network' and 'Landscape & Rural Map'. Use the '+' button on the map to navigate.

Our guide to Aquitaine Region

Maison Georges Larnicol in Bordeaux is a heaven for all those, who like sweets. Here you can find hundreds of different desserts. Try macaroons – small pasties, that look like colorful cookies, are the pride of the French cooks. In Orthez city take a closer look at the locally produced clothes. It combines folk motives with modern tendencies. A beret is always a good idea for a souvenir from Aquitaine. The Pau … Open

Madness of love is probably the most romantic beach of the resort. Its name in French means ‘Rooms of love.’ It's also worth to mention that Biarritz beaches are excellently equipped for active rest and are very popular among windsurfing and beach sports fans. This well-developed shore regularly hosts various sport events. It is widely thought that Biarritz also may boast best diving and windsurfing courses … Open

Aquitaine Region for children - what to visit

History fans will appreciate the caves in the Vaser Valley. Although, Dordogne Perigord is worth visiting not only for its prehistoric monuments. There are a lot of medieval castles, fascinating not only for grownups, but for children as well. Because what kid has never heard of the places, where brave knights and princesses lived? And if your child is interested not in the tournaments and balls, but in flights, … Open

Aquitaine is a popular resort destination for all fans of beachside entertainment. Fans of natural landmarks will be delighted with their visit to Cape Medoc that is famous for its spacious and uncrowded beaches. Many of these beaches have absolutely no infrastructure, so they are full of their natural and original charm. Arcachon Bay is an absolutely unique resort destination. This bay is almost completely isolated. … Open

If you are a fan of the Medieval times, try not to miss the reenactment of the Battle of the Castillon. It put an end to the Hundred Year War and allowed the French to banish the English from Aquitaine. And now every year thousands of knights all around France take part in the most beautiful staging, with the use of the newest illumination effects and the pyrotechnics. The anniversary of the Templar return in the … Open

All around Aquitaine you can try foie gras and canned duck. Besides great wine, we should do justice to grape brandy, called Armagnac, and Gascon Bouquet, a sweet alcoholic drink, served as an aperitif. There are countless restaurants in all five departments, where you can have a great meal. Chez Diego Plage restaurant is located in Arcachon, the “oyster capital” of Aquitaine. Obviously, here they serve … Open