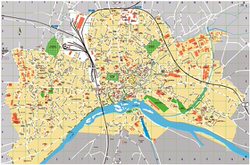 Interactive maps of hiking and biking routes around Nevers

1. You can zoom in/out using your mouse wheel, as well as move the map of Nevers with your mouse.
2. This interactive map presents two modes: 'Biking Routes' and 'Hiking Routes'. Use the '+' button on the map to switch between them.

This Nevers map has two modes: 'Railway Network' and 'Landscape & Rural Map'. Use the '+' button on the map to navigate.

Our guide to Nevers

Another interesting site to explore is the ancient Ducal Palace built in the 15th century for Count of Nevers. It is an amazing architectural monument combining elements of the Gothic and Romanesque styles. This palace has undergone many reconstructions. In the course of one of them, spectacular renaissance windows appeared on its facade and the interior was decorated with huge fireplaces. Over its long … Open

Nine kilometers away from the city is Les z'accroches, a large outdoor leisure center ideal for visiting with the whole family. Based in a picturesque forest, it offers many interesting sports and extreme attractions. Its visitors can enjoy rope bridges and ladders stretched between the trees, special rides for small children and adults who used to like bungee jumping as kids. Among other things, the entertainment … Open

One of the most popular local restaurants among guests of Nevers is Une Note de Vin representing Burgundy and classic French cuisines. Most of its dishes are prepared from regional products, you can always try rare farm cheeses and fresh beef delicacies. One of the main features of the restaurant is a huge selection of Burgundy wines. They often hold tastings and other gastronomic events here. Jean-Michel … Open

Traditions and mentality of Nevers

Local winemakers consider Saint Vincent to be their patron saint. He is usually portrayed with a bunch of grapes in his hand. A beautiful holiday in his honor has been organized all over Burgundy since 1938, and some of the most interesting events take place in Nevers. It is customary to celebrate this holiday at the end of January. In the morning hours, local churches always hold high masses. A mandatory attribute … Open

Nevers has preserved some of the old defensive structures, the most interesting fragment of which is the Porte du Croix. The tower built in the 14th century miraculously survived several destructive wars. A few years ago it was completely restored, and today there is a small Archaeological Museum within the tower's walls. Its exposition is made up of finds discovered by archaeologists during the exploration of the … Open

Nevers for children - what to visit

One of the most popular local attractions is Nevers Plage - a great place to do sports (volleyball, badminton, football, ping pong), as well as try fishing. A specially equipped playground is prepared for the youngest visitors. Besides that, the place often hosts interesting concerts, some of which will certainly appeal to kids. This is also a great place to soak up the sun, given that all the conditions are … Open