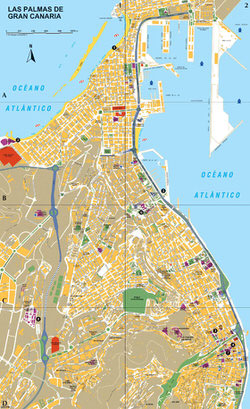 Interactive maps of hiking and biking routes around Las Palmas

1. You can zoom in/out using your mouse wheel, as well as move the map of Las Palmas with your mouse.
2. This interactive map presents two modes: 'Biking Routes' and 'Hiking Routes'. Use the '+' button on the map to switch between them.

This Las Palmas map has two modes: 'Railway Network' and 'Landscape & Rural Map'. Use the '+' button on the map to navigate.

Our guide to Las Palmas

Traditions and mentality of Las Palmas

More than twenty colorful festivals are held in Las Palmas during the year. Those are bright carnivals and music concerts, fairs and religious celebrations; all national holidays would be interesting for travelers and would allow experiencing the local culture. National holidays also differ with special traditions. For example, Cavalcade of the Magi Kings is passing through the city on Christmas. According to an old … Open

One of the most popular cultural centers of the city is the Atlantic Center for Contemporary Art. The opening of this center was held in 1989. Initially, its collection was based on a compilation of works of art donated by the capital's municipality. Today, the museum presents exhibits from various countries of the world. In total, you can see about 2 600 paintings by famous African, American and European painters. … Open

Las Palmas for children - what to visit

For those who like to walk on the wilder and uncrowded places, it will be interesting to stroll through the forest of Caldera de Bandama. It is located in a picturesque mountainous area. You can get to the forest by bus or by car. Fans of ecotourism love to spend time here. Wine enthusiasts visit this picturesque place, for the reason that one of the popular wineries is located here. Another attractive feature of … Open

Las Palmas has an excellent shopping center Centro Comercial Las Arenas. It is quite small in comparison with many European malls but still offers a great variety of goods. It houses large sports shops, as well as trade pavilions full of clothes and shoes from popular European and American brands. Ladies will have the opportunity to visit perfume shops, and tourists with children will appreciate colorful toy shops. … Open

3. Going to some religious sites, be sure to choose the right clothes. Knees and arms have to be covered; women should also cover their head with a shawl. 4. While relaxing on the beach, don’t neglect means of protection. Sunscreen, sunglasses and a hat with a wide brim will be particularly relevant in first days of rest. The period from 11:00 am to 3:00 pm is considered to be the most … Open

While in Las Palmas, be sure to explore a spectacularly styled aquarium called Poema del Mar. It presents a large number of marine species, including crocodiles, chameleons, fish (including both small aquarium fish and predatory sharks, moray eels). Have a great time in Experiencias Virtuales, especially if you are a gaming geek and want to brighten up your stay in the city with the help of virtual reality. Also, … Open