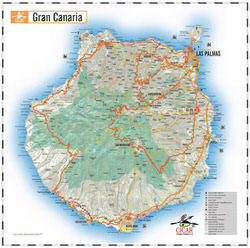 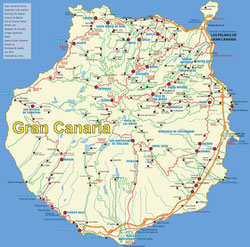 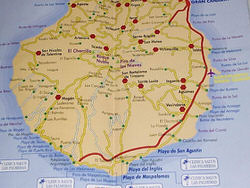 Interactive maps of hiking and biking routes around Gran Canaria

1. You can zoom in/out using your mouse wheel, as well as move the map of Gran Canaria with your mouse.
2. This interactive map presents two modes: 'Biking Routes' and 'Hiking Routes'. Use the '+' button on the map to switch between them.

This Gran Canaria map has two modes: 'Railway Network' and 'Landscape & Rural Map'. Use the '+' button on the map to navigate.

Our guide to Gran Canaria

Traditions and mentality of Gran Canaria

The relaxing nature of local residents manifests itself even in their language - it is quite melodic and slow. It is dominated by Castilian dialect with some of its slang words, so this is a great chance to improve your language skills. Local cuisine is the abundance of potatoes, cheeses and dairy products. Dishes that should be tried first and foremost include “Gofio” (wheat flour with the addition of any … Open

One of the most mysterious sights of the island is the Cave of the Guanches. Hundreds of years ago they served as a home for one of the most mysterious people on earth. The main feature of this tribe consisted of a European appearance atypical for these places. In a few years the mysterious tribe was completely destroyed by the Spanish conquistadors. Today only a mysterious cave remains as a reminder of their … Open

Gran Canaria is famous for its chic resort hotels, which are often chosen as a venue for vacations by world-famous celebrities. Not far from the Aquamarina beach, is sited the Radisson Blu Resort Gran Canaria, aimed at a wide range of guests. It has a large spa with a real Turkish bath. Wealthy guests of the hotel will have access to wonderful suites with an area of ​​more than 100 square meters and panoramic … Open

Gran Canaria for children - what to visit

The Canary Island is literally created for family recreation and active entertainment, many of its attractions and entertainment complexes are aimed specifically at holidaymakers with children. In Maspalomas, you can visit the entertainment park Holiday World Maspalomas, which is the largest on the island. Suitable entertainment is available for children of any age. The park has many colorful carousels and extreme … Open

When it comes to upscale hotels one of the most stylish and attractive ones in Gran Canaria is the Seaside Sandy Beach. The hotel was decorated in an elegant style, with due regard for the most beautiful national traditions. All the rooms are executed with elegant finishing made from dark wood. Of particular interest is the furniture made in the traditional style, with some items made by hand. Every room also … Open

In the immediate vicinity of the capital, is a huge Las Terrazas outlet, where items of famous brands are available with huge discounts all-year-round. Lovers of Calvin Klein and Levi's brands like to make purchases here. Don't pass by Pepe Jeans store. Discounts for quality brand goods here can reach 70%. For the convenience of visitors, there are many attractive restaurants and cafes in the outlet. El Corte … Open