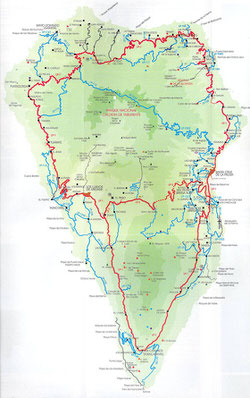 Interactive maps of hiking and biking routes around La Palma

1. You can zoom in/out using your mouse wheel, as well as move the map of La Palma with your mouse.
2. This interactive map presents two modes: 'Biking Routes' and 'Hiking Routes'. Use the '+' button on the map to switch between them.

This La Palma map has two modes: 'Railway Network' and 'Landscape & Rural Map'. Use the '+' button on the map to navigate.

Our guide to La Palma

A real city attraction is the Tobacco House, which occupies a beautiful historic building. Travelers are attracted by the building's exterior, while locals come here for the best cigars in town. All guests of the island must visit the Caldera de Taburiente National Park opened in 1954. In the middle of the nature reserve, there is a crater of an extinct volcano whose diameter reaches 8 kilometers - everyone is … Open

Quieter and calmer but no less beautiful is Charco Verde, which can be an ideal beach to relax with small children. This stretch of the coastline is among the most peaceful on the island. The beach also has several attractive coffee shops and bars. Hide from the hot sun and admire exotic plants in Jardin Canario Garden. It will surely appeal to those who prefer walking on foot, the garden provides special … Open

Cigars produced on the island make a worthy competition to the world famous Cuban cigars. If you visit one of the local factories, you can see how their workers roll cigars by hand using only the best tobacco. Every year, the traditional Carnival of Los Indianos (Desfile de los Indianos) is held on the island. This holiday is considered to be one of the most significant in the calendar of local residents. Many … Open

On the exotic island, there is also a place for interesting cultural entertainment. With children, it is worth visiting the Observatorium Roque de Los Muchachos. This is a modern scientific town located on the top of one of the mountains. On certain days, excursions are organized in the observatory. Visitors of the observatory can admire the stars and distant planets through powerful telescopes, listen to … Open