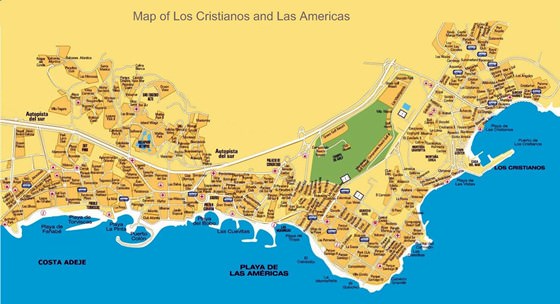 Although there was some recovery in May, international tourism is much under pressure of the continued COVID-19 spread. There are still travel restrictions for foreign guests in most countries but domestic tourism starts to rebound slowly. Even hotels in London, Bangkok, Paris, and other gateway cities suffer from a drastic decline in visitors. As UNWTO reports, the number of overnight international arrivals in January to May decreased by 147 million compared to the same period of 2020 and by a whopping 460 million compared to the same period of 2019. That being said, there is slow growth in arrivals – the decline was 86% in April 2021 versus April 2019 and 83% in May 2021 versus May 2019.

Search for services, infrastructure and sights on map of Playa de las Americas

Among local pubs and bars the Kim's Beach bar is of the greatest interest among guests of the resort. By its appearance and decoration the bar resembles a traditional British pub. Despite the profile of the establishment it is often visited by families with kids. After trying and tasting of favorite treats and beer sorts the guests of the bar may proceed to a bright hall for rest and recreation. The hall is decorated … Open

In spite of the unusual style of life in Playa de Las Americas, foreign travelers get used to it quite fast and in several days they feel there at home. For a lot of natives the primary type of earnings is the work in various touristic organizations and hotels, they show their worth very responsibly there. You can be sure that travelers will be given every support and attention in the hotels; however don’t … Open

One of the main natural attractions of these places is Mount Teide, the peak of which is covered with snow all year round. Anyone can go up to the snow-white peak, it is connected to the foothill area by a cable car. The top of the volcano offers a wonderful panoramic view of the island. All participants of the tour are strongly recommended to take warm clothes with them, even if the enervating heat reigns on the … Open

1. There are several informational centers on resort’s territory and it is easy to find owing to dark-blue transparencies with letter “i” fixed near. Tourists can take map and booklets with description of sights and entertaining centers there absolutely free; also they can book various trips. 2. It is possible to note the signboard with “English shop” mark on a lot of shops near the … Open

Among them it is important to pay attention to Nature Fish Spa center and, as it is possible to guess, their main distinction is the procedure with fish. Interesting evening program can be offered not only by different bars and clubs, but also restaurants. Many of them wait for guests until the dawn. On Sundays the excellent market works in the resort, where it is possible to buy a lot of interesting souvenirs and … Open

Everyday there is a show of trained eagles for park’s visitors; this magical event gave a name for the one of the most important sights of Playa de Las Americas. In the central part of resort there is a picturesque port district Puerto Deportivo Colon, which deserves travelers’ attention too. The main district’s decoration is Christopher Columbus statue; the port got its name owing to this worldwide … Open