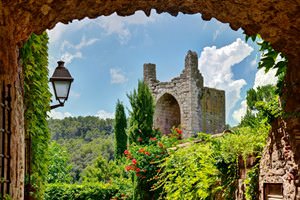 The cultural life of the Costa Brava is rich because of bright celebrations and festivals. They are held almost every month and are always accompanied by lush folk festivals. National celebrations, certainly, attract travelers. Tourists had noted that during celebrations all ethnic boundaries simply disappear; foreigners have fun and take part in all the activities on a par with locals. Every city on the coast has its own patron saint. Every year locals honour him with the beautiful holiday called ‘fiesta mayor.’
Family holidays with kids in Costa Brava. How to entertain your child, things to show to children.
The Costa Brava region is famous for its impregnable cliffs and rocks - however, this does not prevent the coast from being an important tourist destination. And every family member will …

Open
The main event of such festivals is fair, which is usually held on the central square of the city. There you can buy just anything, from original home treats and sweets to handicrafts and special decorations. On the streets of the city rides for the kids are set, during the day, concerts and theatrical performances are held there, and in the evenings visitors can admire the colorful fireworks show.
According to the tradition, in Tossa de Mar and Blanes festival takes place in late June, and in Lloret de Mar holiday falls on the last days of July. In each city fiesta mayor is held in a special way, despite the fact that subjects of festivals are very similar. The most important feature of the national culture is local’s fidelity to old crafts. In many cities, fairs are held on weekends to represent local crafts. Usually tourists visit these sales only out of curiosity, but almost impossible to leave a fair without purchases. Copyright www.orangesmile.com
Cuisine of Costa Brava for gourmet with top restaurants and cafe
Every town in this resort area has to offer its guests a decent selection of restaurants. The most popular restaurant in Lloret de Mar is The Orient Express; it specializes in international …

Open
Beautiful crafts from wood and mother of pearl, home decorations, toys, antiques and jewelry are just some of the products that can be seen on such sales. Craft exhibitions have also become an inherent part of the cultural life of each city. Local residents have long been accustomed to lots of travelers, that’s why tourists are accepted warmly and with a share of curiosity. Don’t be surprised if in the next shop, the seller decides to ask a few questions about your place of residence and occupation. Besides the attractive shops, special handicraft places still exist even in big cities. This is where you can buy unique items or order a memorable gift from a local crafter. 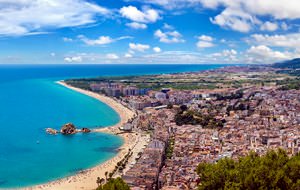 In summer, the Costa Brava is the most attractive region for tourists who prefer to combine beach recreation with attending festivals. One of the most famous events in all of Spain is the event called Cap Roig held in one of the most picturesque places on the planet - Jardins de Cap Roig Escultures. The proximity to the sea and the beach, the green landscapes, the abundance of historical attractions (in particular, the magnificent castle) - all this attracts hundreds of tourists to the wonderful festival. Not to mention great musical concerts given by famous headliners. The event is held for a month and a half, starting in early July and ending in late August.
Excursion over cultural sights of Costa Brava - 'must visit' points of interest
When planning sightseeing tours, you should definitely pay an attention to each city of the coast. You can be sure that trip around each of them would bring a lot of unforgettable …

Open
No less interesting for tourists is the atmospheric festival Portal Blau, which is held for three weeks in the city of L'Escala on the old forum inherited from ancient times. Participants of the festival wear Roman togas and sandals, due to which the situation of the festival corresponds to the times of Ancient Rome. Visitors wishing to fully immerse themselves in the ancient atmosphere follow their example. Besides the musical program, one can witness art exhibitions (photographs, paintings), conferences, literary readings and poetry evenings. The bright event begins in mid-July and ends early next month. 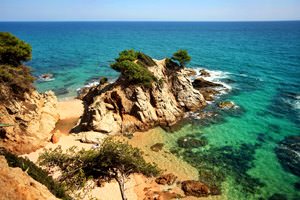 Castell de Peralada is another great festival that many fans of atmospheric events are eager to attend. And all this is due to the fact that it is held in the eponymous Castell de Peralada, one of the oldest castles in all of Spain (the first mention of it can be found in the 9th century). Among the musical genres presented here, one can hear soul, techno, funk, rock. However, some mind-blowing combinations of classical and modern music can often be heard too. The festival starts in early July and ends in the middle of the hot August.
Your active city break in Costa Brava. Attractions, recreation and entertainment - best places to spend your day and night here
Entertainment center of the Costa Brava is Lloret de Mar; the most popular bars and discos, noisy beaches and countless shops are located there. Travelers who want a break from the hot sun …

Open
The Costa Brava Folk Festival is perhaps the longest festival on the coast, starting in early May and ending in late September. During the event, Lloret de Mar's cultural institutions host bright theatrical, dance and musical performances demonstrated by representatives of different nationalities. This is how one can get acquainted with the cultures of many countries, including the local one, since it is paid special attention here. Throughout the month, Sant Feliu de Guixols delights visitors with great open-air musical concerts when the city hosts the Porta Ferrada Jazz Festival. It begins in mid-July and ends in the middle of next month, and among the genres, you can hear are not only jazz but also country, funk, soul, rock. 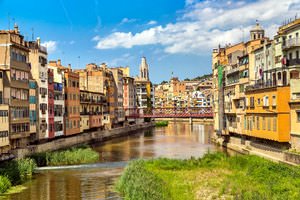 In August, the beautiful picturesque place called Jardí Botànic Marimurtra becomes the venue for a festival popular among church choir fans. We are talking about Les Nits de Marimutra, during which you can not only listen to church singing but also try local dishes and go on themed tours. Another interesting (and definitely unique) festival is held in Verges. Holy Thursday is celebrated here like nowhere else in the world: thus, a religious procession on the central streets takes place with the participation of people dressed up as skeletons. And all this happens to the sounds of drums, which create a unique atmosphere. In Verges, the religious holiday even has a different name: La Dansa de la Muerte. The dance with a clock is considered the culmination of the unique holiday - and as one might guess, it has a symbolic meaning.

This guide to traditions and festivals in Costa Brava is protected by the copyright law. You can re-publish this content with mandatory attribution: direct and active hyperlink to www.orangesmile.com.
Costa Brava - guide chapters 1 2 3 4 5 6 7 8 9

City tours, excursions and tickets in Costa Brava and surroundings

♥   Ancienne cathédrale Sainte-Eulalie-et-Sainte-Julie, Elne, 79.6 km from the center. On the map

Survived castles around Costa Brava
♥   Castle 'Castle of Rupià' Girona, 22.4 km from the center. On the map

♥   Castle 'Castle-palace of la Bisbal' Girona, 25 km from the center. On the map

♥   Castle 'Castle of Montpalau' Catalonia, 31 km from the center. On the map

Colors of Costa Brava in photos

Traditions and festivals in cities around Costa Brava

Lloret de Mar
One of the main celebrations in the city’s calendar is the Fiesta Patronal dedicated to the patron saint Santa Cristina. The three-day event is usually held in late July. Solemn processions take place in a chapel named after the saint, and the main entertainment action is arranged in the central square. It is here that dancers perform the traditional dance “les ... Open »
Tossa de Mar
All roads are closed in the town from five in the evening on the fifth of January. Concerts with performances by children's groups precede this. These children's groups prepare performances for the Cavalcade all year round. A solemn procession led by three Magi is often accompanied by real camels. According to legend, the kings came to the Savior on them. The orchestra, ... Open »
Barcelona
Indigenous people of Barcelona are very gallant and very serious. They are open for communication and have a wonderful sense of humor. The locals are very friendly to visitors and will gladly help them in most difficult situations. Many travellers, who visit Spain for the first time, are scared of the way of communication, which is peculiar to the Spaniards. The usual arguing ... Open »
Catalonia
Cities arrange fun events, musical performances and large-scale fairs and mount an incredible amount of rides for children. It is simply impossible to imagine Festa Major without handicraft exhibitions, where absolutely everyone can learn how to make unique gifts and buy unusual souvenirs. Events dedicated to patron saints of Catalan towns are usually held in summer, so this ... Open »
Andorra la Vella
Stage of one of the major competitions of the International Cycling Union - the Tour of Spain, also takes place near Andorra La Vella. The ninth stage of the race is traditionally held on the territory of Andorra. Many interesting events are connected with French culture and traditions. The most interesting of them are held in the framework of the Season of French Culture. An ... Open »
Salou
The main summer event in Salou is considered to be the Golden Nights’ Summer Fiesta which is annually visited by more than 300 thousands of foreign guests. Queen of the festival contest, bright music shows and great pyrotechnic production, street performances and fairs are the main events of the entertainment program of the grand summer fest. Many country fests are devoted to ... Open »

Cityguide on traditions, mentality and lifestyle of people in Costa Brava. Learn the best periods to visit Costa Brava to discover its soul - authentic festivals, events and celebrations. We will also reveal the interesting habits, attitude towards the world and to tourists in Costa Brava.