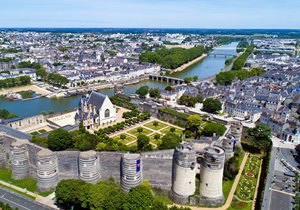 The beautiful city of Angers has many historic symbols but Chateau d’Angers is widely recognized as the most important one. The first protective facilities on the site of the castle date back to the Roman Empire period. The construction of the castle that we can see today started yet in the 9th century. For hundreds of years, the castle was protecting the region. It survived in numerous battles. Chateau d’Angers endured many difficult times, but the stronghold became severely damaged during World War II.
Shopping in Angers - main shopping streets, outlets and boutiques
It is simply inexcusable to enjoy a vacation in this old French city and fail to visit its shops. In Angers, you can visit both modern shopping centers and unique artisan workshops that …

Open
At that time, there was a large ammo warehouse in the castle. When the warehouse exploded, the blast destroyed several nearby buildings. Today, the entire territory of the castle is open for excursions. You will have an opportunity to take a walk on the winding halls of the castle and explore its ancient halls. There is a gallery with an interesting collection of old tapestries in one of the halls. Almost all tourists, who visit the castle, get to the top of the Mill Tower as this is one of the best observation areas in the entire city.
Cathedrale Saint-Maurice d’Angers is one of the most outstanding religious attractions of Angers. The first church was built on this site more than a thousand years ago. That church was wooden and burned down during one of the city fires. It was decided to build a new cathedral instead of the burnt church at the beginning of the 11th century. The construction works ended in 1023. In the Middle Ages, many important Christian artifacts were kept in the cathedral, including the head of St. John the Baptist. Today, the cathedral is a unique architectural landmark with the decent traits of Gothic and Romanesque styles. Famous French masters helped to decorate the cathedral. The shrine still has skillfully made stained-glass windows made in the 13th century. Visitors can admire fabulous frescos with the images of saints and other artistic elements of décor. Copyright www.orangesmile.com
Guide to Angers sightseeing - things to see and to visit
France always welcomes its guests, regardless of the city that they plan to visit his time. Many settlements in this country are famous for their ancient history, and local landmarks are a …

Open
Maison d’Adam or Adam House is an interesting architectural attraction that deserves a mention. This house, which was built in the 15th century, is a prominent example of the framework architecture. There are not many buildings of this type in the region. Centuries ago, the building belonged to a local pharmacist. Today, several artisan workshops and souvenir shops are open here. The building is carefully maintained to preserve its original look. Its inner premises also have beautiful elements of décor of the past centuries. 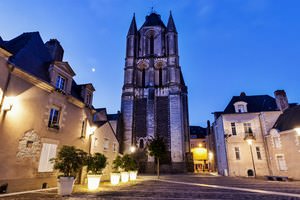 Don’t forget to visit the museums that are open in the city. For example, Musee Jean-Lurcat et de la tapisserie contemporaine is one of the most unusual museums in the city. The museum got its name after Jean Lurcat, the famous French tapestry artist who was born in Angers at the end of the 19th century. The museum is open in a 12th-century historic building. In the 19th century, there was a hospital open here. Today, the museum features an incredibly interesting collection of modern tapestries including the masterpieces created by Jean Lurcat. You can see some of the biggest tapestries in the world during an excursion here.
Family holidays with kids in Angers. How to entertain your child, things to show to children.
The majority of tourists visit Angers in order to get acquainted with its signature historic landmarks. However, it is still interesting to spend several days in this French city if you are …

Open
Art connoisseurs will find it interesting to visit Galerie David d’Angers. This gallery exhibits an interesting collection that is worth checking. The gallery got its name after the famous French sculptor David d’Angers who was born in Angers in 1788. d’Angers was a multi-talented person who was proficient in different types of art. The museum exhibits sculptures and paintings of the great artist, as well as bas relief pendants created by d’Angers. These pendants were very popular, and so d’Angers was making them for the most famous and prominent French personalities of the beginning of the 19th century. David d’Angers was collecting medals, and his collection is also exhibited in the museum. 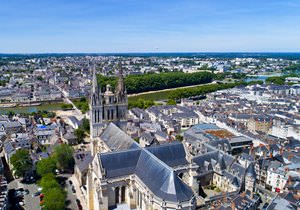 It is worth mentioning Palais du Tau as this is one of the most unusual historic monuments in Angers. The palace got its name because of its unusual shape that resembles the Greek letter Tau. The construction of Palais du Tau finished in the 12th century. After that, the building was continuously expanded and rebuilt for several centuries. These transformations made the palace a combination of different architectural styles. If you take a closer look at Palais du Tau, you will notice different materials were used over the centuries to make the decoration elements.
Your active city break in Angers. Attractions, recreation and entertainment - best places to spend your day and night here
Besides an interesting excursion program, Angers will please its guests with a variety of entertainments. You can take a stroll in the picturesque city parks and gardens, visit entertainment …

Open
Today, the building has elements made from limestone, tufa, and schist. Palais du Tau became a state-owned property in 1907. After reconstruction, a museum of religious art was opened in the palace in 1910. This museum has been open for more than a century. It exhibits collections of old icons and religious artifacts. A collection of old tapestries with religious scenes is a true gem of the wonderful museum. You can see the most marvelous halls of the museum during an excursion.

In the section below, you can get one of our excursion, activities or city discovery tours over Angers and surroundings. Our website offers 10-30% lower ticket prices, when compared to the offline purchase on the spot.

City tours, excursions and tickets in Angers and surroundings

This guide to cultural sights Angers is protected by the copyright law. You can re-publish this content with mandatory attribution: direct and active hyperlink to www.orangesmile.com.
Angers - guide chapters 1 2 3 4 5
Reference information
Map of all palaces

Public palaces near Angers
♥   Palace 'Château d’Angers' , 1 km from the center. On the map

Cathedrals and basilicas near Angers
♥   Basilique Notre-Dame du Chêne, Vion, 43.1 km from the center. On the map

♥   Basilique Saint-Louis-Marie-Grignon-de-Montfort, Saint-Laurent-sur-Sèvre, 62.8 km from the center. On the map

♥   Basilique Notre-Dame d’Avénières, Laval, 66.3 km from the center. On the map

♥   Basilique Notre-Dame de l’Assomption, La Guerche-de-Bretagne, 71.7 km from the center. On the map

Photogallery of cultural heritage of Angers

Excursions over cultural sights of neighbours of Angers

Laval
In the vicinity of Laval, there are several important archaeological areas available for excursions. The most interesting one is the Thermes Gallo-Romains located just five kilometers from the city. In this area, researchers have discovered the ruins of Gallo-Roman buildings, once a large thermal complex. Over the years, researchers have managed to fully restore the ancient ... Open »
Nantes
The museum presents a rich collection of antique articles among which one will find art objects, antique arms and beautiful furniture. After the collection exploration the visitors of the museum may enjoy a walk through a scenic area of the museum and admire aged trees. Among religious landmarks of Nantes the Cathedrale Saint-Pierre-et-Saint-Paul is the most remarkable one. ... Open »
Le Mans
Musee Tesse, which is located next to Jacobins square, is also an interesting venue. It will certainly appeal to those who have a passion for painting. The museum features works by French and Italian artists. There are often exhibitions of contemporary artists. An important cultural object is L'Abbaye de l'Epau. Recently, an architectural monument of the early 13th century has ... Open »
Tours
Another important attraction of Tours is located on the Place Plumereau; we are talking about the old Basilica of Sant-Martn. Named after the patron saint the basilica attracts pilgrims and curious tourists from all over the world. The undisputed symbol of the city is the beautiful Plessy-les-Tours Castle housing the Museum of Wax. For 20 years it was the principal residence ... Open »
Rennes
Age-old fresco paintings, high columns made of rare red marble, elegant gold plated elements – tourist spend hours contemplating the glory and majesty of the cathedral. Travelers wishing to get a deeper insight into the history of the city and of its suburbs should pay a visit to the Bretagne Museum. The museum offers three permanent exhibitions encompassing interesting ... Open »
La Rochelle
An emblematic landmark is the Pylori fountain located near the waterfront. Centuries ago, it was one of the most important sources of drinking water in the city. The access to the fountain was very difficult, so in 1722 it has been moved to another place. Water was provided to fountain, but it was no longer safe to drink, so after the last reconstruction the fountain has a ... Open »

Culture guide to Angers. Which fascinating sights to visit once you are in Angers: temples, churches, museums, theaters and castles. Recommendations (with addresses, phone numbers and links) on the places 'must visit' in Angers. Plan your own city excursion by using this page info!