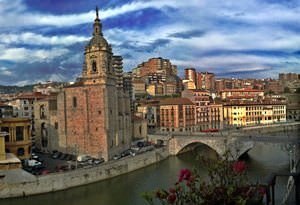 In Bilbao travelers are attracted not only by truly unique sights, but also by unforgettable national holidays, the most famous of which is certainly Semana Grande de Bilbao. The festival, which name can be also translated as "Big Week of Bilbao", is organized every year. The festival starts on the last Saturday before August 22 and lasts nine days. This celebration has appeared rather not long ago. For the first time Semana Grande de Bilbao was officially celebrated only in 1978. Previously numerous fair trades and August festivities had no official status, even though they were always celebrated with a grand scale. Each year the city's main festival is held in accordance with a special script, which is written by authors from of various districts of the city. A large fair trade is considered an essential part of each celebration. This is the place where you can buy numerous interesting crafts and souvenirs, as well as taste various dishes and delicious sweets. All main celebrations are traditionally held on the square in front of Theatre Arriaga. During nine days the square hosts numerous music and dance performances, special performances for children, strength competitions and many other interesting cultural events.
Old hotels keeping the history of Bilbao
Bilbao is not deprived of charming hotels, behind the walls of which is an amazing historic atmosphere. Fans of country holidays should pay attention to Hotel Artetxe housed in a restored …

Open
In accordance with an old tradition, one of the prominent inhabitants of the city should make a speech on the first day of the holiday. 10 years after the official proclamation of the holiday the so-called "town crier" received a special uniform. The suit hasn’t changed at all over the years and nowadays it consists of a bright yellow jacket, a tailcoat, a black cocked hat, a wide white belt and white trousers. The celebration is notable by one more important tradition - a launch of a missile. This solemn mission is trusted to the winner of the local beauty contest, which is referred by the locals as "chupinera". This girl must also be present at the ceremony wearing a festive costume – a scarlet jacket, a scarlet beret and a fluffy black skirt. The launch of a missile takes place on the main square of the city and signifies the beginning of the holiday.
This truly unforgettable celebration has its own symbol - Marijaia doll. Figurines depicting this merry woman can be purchased in any souvenir outlet that you will easily find in all major streets of the city. Big Week of Bilbao is a favorite holiday of the local people. However, more and more tourists arrive in the city every year in order to participate in the celebration. You will simply find no better way to get acquainted with multifaceted and colorful Spanish culture. Copyright www.orangesmile.com
Best hotel choice for romantic escape, wedding or honeymoon in Bilbao
In Bilbao, it is quite easy to find a hotel suitable for a romantic stay. For many years, designer Sercotel Hotel Gran Bilbao has been in demand among couples. Its rooms are decorated in a …

Open
If there's one thing known about Bilbao, it's that people love to have fun here. Residents of Gate of the Basque Country (a nickname of the city) try to feel joyful in everyday living, and in this they are similar to the Spaniards. And from the Basque people they got a certain pridefulness. All together - the violent temperament of the Spaniards and the pride of the Basques - gives a vivid combination turning them into interesting and original persons. That's why they consider themselves a little unlike the Spaniards, and the issue of national identity is one of the taboo topics for conversation. It's not like the locals want to detach from Spain, but some of them could really think about it. 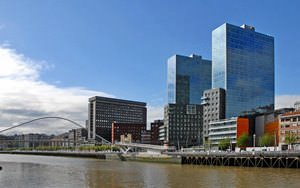 However, discussing such subjects as football can last endlessly. Actually they are all enthusiastic about sports, including football. There are many sports complexes and stadiums in the city, which only confirms this fact. You can often meet cyclists, because it is believed that health is one of the most important values. Languages in Bilbao (as well as throughout the whole region) are both Spanish and Basque. The latter is very interesting because it does not resemble any other Indo-European language. It is a very original language with a very few modern borrowings. These are the people of Bilbao and their language.
Shopping in Bilbao - main shopping streets, outlets and boutiques
In Bilbao, there is an appropriate shopping destination for everyone. Trendies will be interested in strolling around Plaza Moyúa Square. The most interesting designer shops and fashion …

Open
Basque Fest opens the season of fun in Bilbao, starting in late March and lasting until early April. The whole Bilbao turns into one big stage, the main venues are Plaza Nueva, Azkuna Zentroa, and Guggenheim Museoa. Visitors are not only given the opportunity to enjoy quality music watching theatrical performances, they can also find some interesting thing at the fair, participate in workshops, and taste local cuisine, including wines. This is one of the best festivals for those who want to get to know the Basque Country and Bilbao in particular. 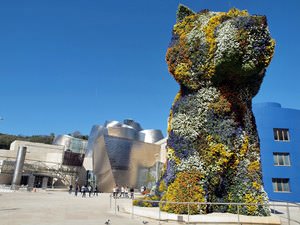 In mid-July, you can get to the most popular festival in the city, the name of which is BBK Live. The event is dedicated to electronic, pop, and rock music. It is an open-air festival, which is sure to please those who prefer camping and relaxing outdoors to stuffy clubs. The festival headliners are always performers who've made a name for themselves on the world stage. Every year, its organizers try to surprise the visitors, so that none of them will have a chance to get bored. The venue for the musical event is Kobetamendi Park.
Top touristic routes around Bilbao: architectural sightseeing and landmarks
Discovering the architecture of Bilbao from bird's eye view! Basilica de Begona, Teatro Arriaga, Mercado de la Ribera, City Hall, Alhondiga Bilbao, Palacio Euskalduna Jauregia, all those monuments are defining the image of Bilbao …

Open
Another interesting event in the world of art lasts four months. It's all about Art and Space Festival, which begins in mid-December and ends in mid-April. The venue is the city's most famous museum - Guggenheim Museoa. At this time, there are interesting exhibitions for those passionate about art. Another interesting event for people who are interested in art is Goya and the Court of Enlightenment. The four-day festival starts in mid-February and ends at the end of May. The primary venue for it is Bilboko Arte Ederren Museoa. 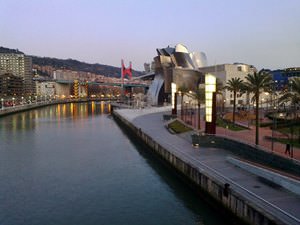 Loraldia Festival, which takes place at the end of April, is another opportunity to get a bit closer to the culture of the Basque Country through learning some of its facets. The fact is that Loraldia is a kind of culture, to say the least, that originated in Bilbao. All kinds of exhibitions, theater performances, music shows, contests, and literary readings are held as part of the event. The traditional venue for the festival is Euskalduna Jauregia. Throughout the year, Bizkaiko Danzarien Biltzarra offers an interesting cultural program (romerías) for the purpose of popularizing the multifaceted Basque culture.
Guide to Bilbao sightseeing - things to see and to visit
Bilbao is a wonderful city located on the north of Spain. It’s worth mentioning that this town is the administrative center of Vizcaya. This is one of the largest cities of Spain. It …

Open
Visiting Bilbao at the end of March, you can witness Regata Ingenieros-Deusto. The colorful event awaits everyone who wants to see who will be the next winner of the competition - the fact is that two teams compete in the regatta - the first one represent Engineer School, and the second one is from University of Deusto. Nobody forbids voting for the "favorites" - on the contrary, teams need support very much. Bilbao hosts another unique event called Underrun Metro Bilbao. This is truly an interesting experience for athletes running from Moyua to Ansio metro station, which stop operating at this time. In total, participants need to run through 8 stations including the starting and final ones.

This guide to traditions and festivals in Bilbao is protected by the copyright law. You can re-publish this content with mandatory attribution: direct and active hyperlink to www.orangesmile.com.
Bilbao - guide chapters 1 2 3 4 5 6 7 8 9 10 11 12 13

Cathedrals and basilicas near Bilbao
♥   Catedral de Santiago Apóstol, Bilbao, 3.6 km from the center. On the map

♥   Iglesia San Prudencio de Armentia, Vitoria-Gasteiz, 51.1 km from the center. On the map

♥   Castle 'Tower of Doña Otxanda in Vitoria-Gasteiz' Araba, 50.8 km from the center. On the map 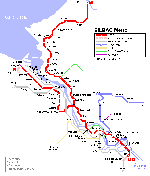 Colors of Bilbao in photos

Traditions and festivals in cities around Bilbao

Basque Country
The Big Week Festival in the middle of August is the time of festivity, when you can feel the positive and carefree atmosphere. The same, as during Piratas de Donostia and Carnaval festivals. On the third week of July, San-Sebastian welcomes Jazzaldia, the biggest European jazz festival, that hosts the world famous stars. There is also an International Film Festival. In ... Open »
Santander
Considering favorite holidays and celebrations of local folks a specific tradition of a birthday celebration should be taken in focus. Commonly a birthday is celebrated twice a year – the first celebration is of a true birthday of a person and another one is a celebration of a saint’s day. It should be noted that the tradition of a double celebration of birthday has been ... Open »
San Sebastian
The holiday is celebrated on the 20th of January. The main event of the festival is the Tamborrada of Donostia. A festive march of young musicians of local music schools moves through the central streets of the city announcing the beginning of the fest with drumming. Commonly the festive march engages over five thousands of youngsters. The bright and solemn opening of the ... Open »
Biarritz
But that's not nearly all - Roxy Pro Biarritz is the largest festival, but throughout the year, the city hosts many other competitions in this sport, which gather all fans of spectacular shows in the European capital of surfing. Thus, sports competitions take place at the end of March, May, mid-April, August, September, and at the beginning of July, there is even a surfing ... Open »
Gijon
In addition to a variety of holiday items, a lot of interesting sweets and treats are sold at the market. The special Christmas delicacy is turron. On the eve of the New Year streets are decorated with aixames torches; they give the city a mysterious and romantic look. Talking about features of the local culture, we should definitely mention love for cider. The beautiful ... Open »
Leon
The cultural life of Leon is versatile and original; the city hosts both beautiful ancient festivals and interesting modern celebrations. It is worth noting the special hankering of local residents to the culinary arts. During the year, lots of various culinary exhibitions, fairs, workshops and culinary competitions are held in Leon. However, the culinary tradition is not the ... Open »

Cityguide on traditions, mentality and lifestyle of people in Bilbao. Learn the best periods to visit Bilbao to discover its soul - authentic festivals, events and celebrations. We will also reveal the interesting habits, attitude towards the world and to tourists in Bilbao.