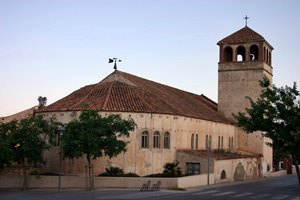 Many people associate Almeria primarily with the extravaganza flamenco dance. Some people recall the traditional Spanish bullfight while talking about Almeria, and for many people around the world the region remains home of fine wines. In any case the local residents have more than enough various traditions, customs and national peculiarities. Bullfights are usually organized on the eve of major holidays. Both locals and tourists come to watch the spectacular show. Fans of this entertainment always try to purchase tickets in advance in order to get a seat on a cozy shady side.
Excursion over cultural sights of Almeria - 'must visit' points of interest
A beautiful cathedral remains the main symbol of Almeria. Many years ago an old mosque was located on the site of the cathedral. In the beginning of the 16th century the mosque was …

Open
The local cuisine is also distinguished by various interesting traditions. Thus, the olives have become a kind of a symbol of professional chefs. The olives are used to produce excellent oil, which has become a required component of many local specialties. Olives can be even served as a separate dish. They are marinated, stuffed with spices and anchovies and certainly added to various salads. Many travelers buy olive oil as a souvenir. Quite a notable fact – the olives are used not only in cooking, but also for cosmetic purposes.
Visitors of local cafes and restaurants often mention rather an interesting peculiarity – while having a meal, the local people can brush the crumbs and debris away from the table to the floor. This is quite acceptable in the city. The Spaniards believe that stacking dirty napkins and other debris on a dining table is simply unacceptable – they must lie on the floor, which is washed several times a day by restaurant’s staff. Copyright www.orangesmile.com
Your active city break in Almeria. Attractions, recreation and entertainment - best places to spend your day and night here
Roquetas de Mar is known as the main entertainment center of Almeria. This is a huge complex, in which territory are located modern cinemas, nightclubs and discos, fashion boutiques and …

Open
The locals are distinguished by quite a relaxed attitude to any urgent matters. They are never in a hurry, trying to finish all their tasks before the end of the day. In most cases the tasks will be delayed until tomorrow. We should definitely mention the local peculiarities concerning apparel. The natives are very attentive to their appearance. If male wardrobe is fully consistent with European standards, the local women are dressed in a special way. A colorful long dress remains the most common clothes, and hair is traditionally decorated with pins with large flowers. Some prefer red tints of color, but orange pins are also very popular. The reason for popularity of such colors is simple – they are reminiscent of an orange tree that is known as a symbol of eternal youth and beauty. The fruit of the tree are associated with orange flower buds. 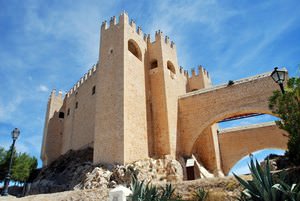 Almeria city hosts many festivals, carnivals, and bright celebrations. During summer, every tourist to this sunny city will enjoy weekly musical performances, sports competitions, hot dances, original fairs, and celebrations on the embankment near the seashore. As in all Spain, local people celebrate such holidays as Santa Semana, Romeria de la Virgen del Mar, Cruces de Mayo, La Noche de San Juan and Feria. The last one is the most anticipated and popular event among the residents of Almeria. Feria is the main summer holiday here, which is celebrated in the last week of August. Feria is the main fair of the year, held on the eve of the Virgin Mary del Mar holiday. Through the week, you will enjoy various exhibitions all over the city, which mainly represent the gastronomy of Almeria and the surrounding cities. The program of Feria is literally rich and bright on festive events. You will have the best time enjoying bullfights, dance and folklore carnivals, folklore festivals and flamenco, sports, music and dance events. The hot sounds of Spanish music can be heard all over Almeria. Feria ends on the last Sunday in August with bright fireworks and dancing until the morning.
Advices to travellers: what you should know while being in Almeria
1. It’s better to purchase tickets for bullfighting in advance as it is very popular not only among the locals but also among visitors. Prior to purchasing tickets you should …

Open
The holiday of Feria is complemented by another fascinating event, which also takes place in August. The Spanish resort of Almeria invites fans of electronic music to the Dreambeach festival. This event takes place on the beach of Villaricos near the village of the same name. Villaricos, one of the most attractive and quiet coastal places in the region of Almeria, for two days turns into a multi-sounded realm of electronic music. Fans of this musical direction adore Dreambeach, and not surprisingly that the festival is always crowded. Every day the festival attracts more than 40 thousand music lovers. During the festival, every fan of music will enjoy the performances of Spanish DJs, as well as celebrities of the first magnitude, like Nicky Romero, Carl Cooks, Andy C, Oliver Heldens, Ferry Corsten, David Getta, Don Diablo and Chase & Status. There are four stages, where you can dance to the sounds of electronic music. The quality of sound and wild entertainment are guaranteed. Guests of the festival are located in a tent city on the beach or in the cozy hotels of Villaricos. From Almeria to Villaricos you can get by car or bus and the trip will take approximately 1 hour.

This guide to traditions and festivals in Almeria is protected by the copyright law. You can re-publish this content with mandatory attribution: direct and active hyperlink to www.orangesmile.com.
Almeria - guide chapters 1 2 3 4 5 6 7 8 9 10 11 12

Cathedrals and basilicas near Almeria
♥   Catedral de Nuestra Señora de la Anunciación, Guadix, 78.7 km from the center. On the map

Colors of Almeria in photos

Traditions and festivals in cities around Almeria

Granada
Besides amazing concerts and jazz evenings, guests of the festival are welcome to visit numerous interesting events, exhibitions, master classes and lectures. Everyone is welcome to participate in these training courses that are headed by masters of jazz. They will share their secrets of success with beginners and will teach them advanced performing techniques. The cultural ... Open »
Nerja
The fest is celebrated in honor of the monk named San Antonio who lived a secluded life in a desert for more than 70 years. The first time the fest was celebrated in the 17th century. In the middle of July the Virgin del Carmen festival takes place. The festival is devoted to the Virgin Mary. On this day the streets of the city witness festive marches and processions and the ... Open »
La Palma
Every year, the traditional Carnival of Los Indianos (Desfile de los Indianos) is held on the island. This holiday is considered to be one of the most significant in the calendar of local residents. Many years ago, when a crisis broke out in the Canary Islands, many of their residents moved to Cuba. Having made a fortune there, they decided to come back to their historical ... Open »
Murcia
Each year Murcia witnesses several bright and remarkable ethnic holidays and festivals which attract many tourists to the city. Plenty of entertaining programs, inimitable folk performances and festive treats are among main attractions for the city guests. A scale festival is held in Murcia in spring. Its main festive event is the Burial of the Sardine march. An original event ... Open »
Malaga
You can see locals dressed in traditional costumes and dresses, luxurious flamenco performances are always held during the fair. In colourful tents, guests of the fair are offered to buy beautiful national clothes and special shoes necessary for the performance of national dances. Hundreds of handicrafts and works of art are sold here, as well as delicacies brought from ... Open »
Andalusia
Bullfighting and flamenco rhythms are first associations that come to mind while mentioning Andalusia. Any holiday can’t be held here without national music and performances of professional dancers; performances of matadors have long been a favorite pastime of the indigenous population. Several matador schools, where boys are trained from an early age, are situated in ... Open »

Cityguide on traditions, mentality and lifestyle of people in Almeria. Learn the best periods to visit Almeria to discover its soul - authentic festivals, events and celebrations. We will also reveal the interesting habits, attitude towards the world and to tourists in Almeria.