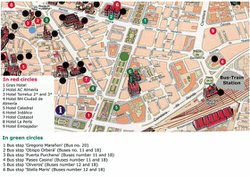 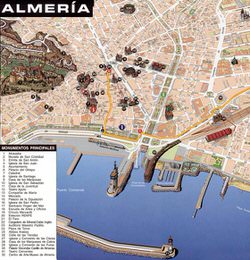 Interactive maps of hiking and biking routes around Almeria

1. You can zoom in/out using your mouse wheel, as well as move the map of Almeria with your mouse.
2. This interactive map presents two modes: 'Biking Routes' and 'Hiking Routes'. Use the '+' button on the map to switch between them.

This Almeria map has two modes: 'Railway Network' and 'Landscape & Rural Map'. Use the '+' button on the map to navigate.

Our guide to Almeria

Fans of exotic dishes should try the dish named «bocas de la Isla». It is cooked from crab meat, which is delivered to restaurants by local fishermen. Various vegetable salads and stews will become a great addition to the delicious seafood. Some restaurants offer olives as a garnish – olives are known as one of the most popular local snacks. Fans of meat dishes will enjoy trying Iberian ham and bull's tail. No … Open

Traditions and mentality of Almeria

The locals are distinguished by quite a relaxed attitude to any urgent matters. They are never in a hurry, trying to finish all their tasks before the end of the day. In most cases the tasks will be delayed until tomorrow. We should definitely mention the local peculiarities concerning apparel. The natives are very attentive to their appearance. If male wardrobe is fully consistent with European standards, the local … Open

In the vicinity of Almeria, travellers can visit many curious archaeological areas and see the sights that are approximately 1000 years old. An excellent example is “Aljibes arabes” - the Arab aqueduct that was built in the 11th century by order of the governor of Almeria - Hairan. These water communications were built in order to provide the city and the troops guarding it uninterrupted supply of drinking … Open

It’s certainly worth noting Tryp Indalo Almería among the best hotels of Almeria. This hotel is full of charm. It offers customers spacious white-colored rooms decorated with light wood. The hotel is sure to impress fans of active lifestyle, as they will be able to live in an exclusive Fitness room. This cozy room has multiple sport simulators and a set of accessories for workout. Those preferring to watch … Open

Almeria for children - what to visit

The most unusual amusement park of Almeria is Mini Hollywood. It is a real town, built in the style of the Wild West. Formerly, it was used as a film set. Here was shot famous westerns, and when the square was not needed, it was converted into an interesting amusement park. Today, there are a lot of unique attractions for visitors of the park. Every day, interesting show programs are conducted for the guests. On … Open

Original themed style is a hallmark of La Perla hotel; its charming interior is dedicated to the marine element. Design is characterized by an abundance of bright colors, elegant wooden furniture and walls painted in bright colors. The main attribute of the interior is a collection of great pictures with sea views that help to tune in a romantic way. The ground floor has an attractive bar with wooden finishing, cozy … Open