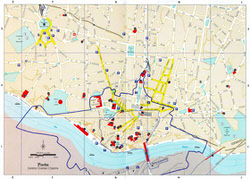 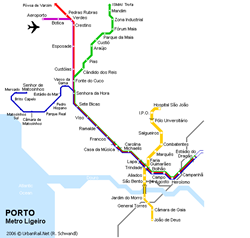 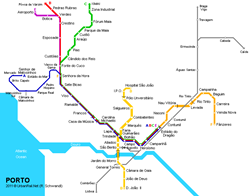 Interactive maps of hiking and biking routes around Porto

1. You can zoom in/out using your mouse wheel, as well as move the map of Porto with your mouse.
2. This interactive map presents two modes: 'Biking Routes' and 'Hiking Routes'. Use the '+' button on the map to switch between them.

This Porto map has two modes: 'Railway Network' and 'Landscape & Rural Map'. Use the '+' button on the map to navigate.

Portugal - moving around the country

Today, three international air harbors are operational in Portugal. The central airport in Portugal is Portela’s airport in Lisbon. It is located near the capital, so tourists will not have any problems with a trip to the city. There buses run different routes, and there are taxis on standby at the exit from the terminal. The airport has well developed infrastructure. On its territory you will find one of the largest duty-free shops in all of Portugal, souvenir shops and food stores. There are also several free children’s rooms, in which families with children can occupy their kids before their flight. … Open

Nature and parks of Portugal

The most popular resort destination is the southern tip of the country, especially the Alargve region, which occupies more than 150 kilometer of coastal strip and stretches from Monte Gordo in the east to Lagos in the west. The northern part of the State is rich in small towns with fully preserved architectural monuments. … Open

Our guide to Porto

One of the most popular outlets in the city, Norteshopping, is located in Porto suburbs. The outlet offers designer clothes with big discounts. This shopping complex is very popular with travelers as the majority of clothes and accessories are of a high quality. Fans of eye-catching and unusual items are usually fond of Ekstra. The clothes sold at this shop virtually strikes visitors with an incredible combination … Open

Hotels with history of Porto

The luxurious Hotel Infante De Sagres is no less attractive from a historical point of view. The old building, in which the hotel is open, has many original elements of décor. Travelers, who visit Infante De Sagres, will see beautiful marble stairs with carved wooden banisters, massive wooden beams in both public areas and guest rooms, and ceilings with amazing fretworks. Modern design elements only skillfully … Open

7. It’s easy to find newspapers in many different languages in local newsagents, so many tourists can buy their usual newspapers and magazines even when they are away from home. 8. During a walk on public places you must be especially careful with your personal belongings. There might be pickpockets in transport, markets and major shopping complexes. 9. The best way to exchange … Open

Many tourists are attracted to the city of Porto by the prospect to try the best kinds of the port wines, others - to buy high-quality coffee, and some - the opportunity to see the most interesting places and attractions, known to tourists. Do you want to appreciate the charm of all the outstanding attractions of Porto right away? Take a walk along the Ponte de Dom Luis I bridge. Here you will find a lot of bridges … Open

Weekend in Porto in original style

There is a no less exciting way to admire the panorama of the city – to make a helicopter ride. This type of entertainment is incredibly popular in Porto. One of the so called helidromes is located on the bank of a river, near the Museum of Trams. Local companies offer helicopter excursions of different length. If you have enough money, you can fly above the city and its suburbs several hours. Savvy travelers can … Open

Festivals and events in Porto

Perhaps, the brightest and most memorable place in Portugal is the city of Porto. In general, Porto is the capital of the wine industry of the country. When they speak of Portuguese wine, they mean Porto wine. Also, in Porto pass numerous interesting events, so you will not get bored here definitely. If you came to Porto in June, be ready to celebrate one of the most striking traditional festivals of Europe - the … Open