Detailed hi-res maps of Valladolid for download or print 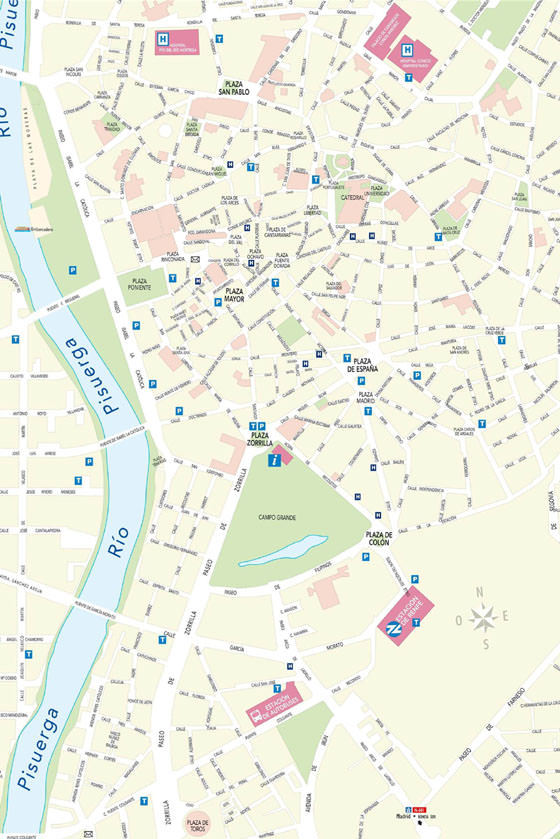 Search for services, infrastructure and sights on map of Valladolid

Our guide chapters over Valladolid

Once Valladolid was the capital of Spain; today this is a large industrial center that doesn’t stop surprising its guests by wonderful architecture and hospitable atmosphere. Santiago Street is considered the center of the city. If you take a walk along it, you can reach Mayor Square. All most beautiful buildings of the city are located around the square or nearby it. The city hall is also situated nearby and … Open

The main symbol of Valladolid - a beautiful cathedral – is located east from the square. The first religious building in the place of the cathedral was built back in the 12th century. In the end of 16th century a building of the cathedral was started on the site of former Romanesque church. It should be noted that some elements of this large-scale construction have remained inconclusive. Today the huge building … Open

Valladolid is the right place to try escapes quests. The fact is that here they are very popular, and have already been tested many times here. The most interesting centers for tourists are The Key Escape Room, Enigma Valladolid, Time Over Escape, and Break The Wall. If you want to try your hand at such a type of entertainment as go-karting, explore Karting San Pablo Valladolid, and if there is a desire to go to … Open

The city is home to more than two hundred gastronomic establishments of different level that offer dishes from different cuisines. Some restaurants amaze guests with their exquisite menus and unique decoration of halls, while others attract guests by their intimate and friendly atmosphere. Without a doubt, the main advantage of low cost restaurants is reasonable prices and wide selection of dishes. Guests of … Open

Traditions and mentality of Valladolid

Valladolid is a city with amazing history and truly incomparable culture. While visiting it, you will surely hear numerous legends and stories connected with the appearance of its beautiful name. According to one legend, the name of the city was originally discovered by the Arabs. Initially it sounded like "Baladul Walid", which is literally translated as "the city of Walid". Valladolid was named in honor of one of … Open

Among the religious sights, it is worth noting the ancient monastery of St. Benedict, as well as the church of the same name situated on its territory. The monastery was founded in 1390, and the beautiful Gothic Church was in the early 16th century. Many of the decoration items of the Church that can be seen today have been within its walls from the moment of its opening. Here, an ancient altar, old wooden seats, and … Open