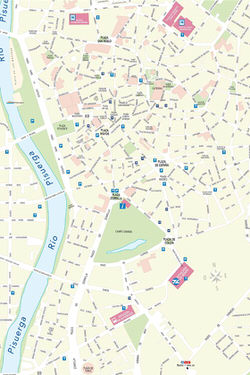 Interactive maps of hiking and biking routes around Valladolid

1. You can zoom in/out using your mouse wheel, as well as move the map of Valladolid with your mouse.
2. This interactive map presents two modes: 'Biking Routes' and 'Hiking Routes'. Use the '+' button on the map to switch between them.

This Valladolid map has two modes: 'Railway Network' and 'Landscape & Rural Map'. Use the '+' button on the map to navigate.

Our guide to Valladolid

The birthplace of Anna of Austria best known from the most popular Alexandre Dumas' novel offers a lot of activities. Thus, if there is a desire to fly in a hot air balloon and admire the former Spanish capital's numerous sights from the sky, be sure to contact VallaGlobo as soon as possible. The most amazing impressions from what you see are exactly guaranteed, because you can spend the whole eternity viewing the … Open

Los Zagales restaurant accepts visitors until late in the evening. Dishes from Spanish cuisine make up the basis of its menu. It is worth noting that the restaurant's menu is updated every season. Moreover, several times a month guests are offered to try dishes from a special thematic menu. Fans of sushi and Oriental delicacies will surely like Corinto restaurant, which is also considered one of the most exotic … Open

Traditions and mentality of Valladolid

Easter remains the most favorite holiday of locals. Interesting events take place in Valladolid during the whole Holy Week. The solemn celebration starts with an equestrian march, in which take part members of various religious communities of the city. There are many people on the streets of the city who come to watch the amazing procession. As a rule, the procession ends on Mayor Square. Once the march is over, … Open

One of the most picturesque places in the city is the Campo Grande Park, the largest park of Valladolid. The area of this Park is approximately 11.5 hectares and it is located close to the city centre and railway station. The very first park in this place was founded in 1787, and today, the luxurious park amazes with a variety of exotic plants and flowers. In the warm season, it is always decorated with interesting … Open

Near Valladolid Museum and the Church of San Miguel is popular Hotel Olid. Besides standard rooms, it is ready to offer travelers 60-square-meter luxury suites, individually designed and complemented by a built-in lighting system. Each of the luxurious rooms has a spa bath in the bathroom and a king-size bed in the bedroom. The hotel is well-known to connoisseurs of high cuisine for its restaurant serving … Open

Among Valladolid budget hotels, there are also quite original and attractive ones. Just like The Book Factory Hostel housed in a restored old factory building. Its interior is full of bright colors, the walls of the historic building are brightly painted, everywhere you can see elements of original wall murals and colorful designer furniture. On the ground floor, there is a cozy lounge where it was decided to … Open